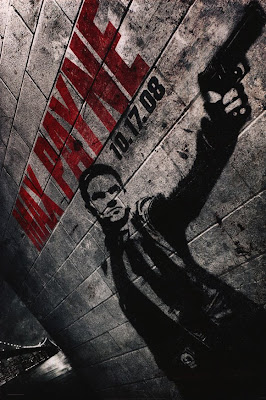 Plot: Coming together to solve a series of murders in New York City are a DEA agent whose family was slain as part of a conspiracy and an assassin out to avenge her sister's death. The duo will be hunted by the police, the mob, and a ruthless corporation.

My Thoughts: In 2001 the video game Max Payne made its debut at video game stores everywhere, and almost instantly became a smash hit among the gaming community, which fallowed by a sequel that proved to break the extremely high bare the first game had set, over the course of the years since its release it has carried on with a pretty big fallowing of what I’d like to call “Payne fans”, these fans, who over time had gone beyond just playing the game, but have gone as far as to making fan made live action short movies to give themselves a quick fix from time to time, to trying to look the part of our bullet time hero, and over the time since its sequel has it had thousands and thousands of fan mail sent to the developers pleading for a second sequel, however after a few long years (anything over three years is an eternity in the gaming community) of waiting fans were given something batter then a second sequel; they were given word that a live action film was to be made based of the first game, soon after actor Mark Wahlberg announced that he was in fact casted to play our dark haired leather jacket wearing hero with nothing to live for! This sent the fan base back into action once again causing a whole new frenzy of Payne madness in the gaming world and now in the moviegoer world. 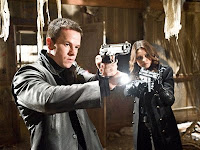 be satisfactory? The answer is yes… and no. yes because the film manages to express the same dark cynicism in our human nature which is how it is in the game, showing the darkness and worst of humanity at its best, and it captures the essence of the plot’s foundation showing how far to edge of death a man will go when he truly has nothing left to live for, in this case our main hero, “Payne” is a man covered in layers of darkness in his very soul, he is more a shell of the man he once was then anything else with no light at the end of his tunnel, no salvation, only revenge, but he fights on hoping for a new day to arrive, or at least taking out the people he intended to before being taken out himself. The action proves to be very satisfactory and had me cheering with joy and although the film lacked in blood and gore it made up tenfold with very stylish gun fights that was more than worth it, in my opinion one scene in particular involves Max Payne (Wahlberg) diving backwards while holding a shotgun while in bullet time showing the bullets from his enemy just missing him by mere inches followed by him taking his target out while still in midair, now if that doesn’t rouse you to shear excitement than I don’t know what will, but know that is but a taste of the action this film carries. Now with that said on the more negative side; the film lacks in a few areas of the plot, for one thing the first act will get the viewers into the film and wanting more, however the second act slows down quite a bit and if that doesn’t make things bad the third act proves to be somewhat slower and will bore some, but this can be blamed on the fact that the games was a 50/50 when it came to story vs. action, and to make it into a full length live action would call for it to have more story, so this resulted in a few rewrites to the original story to properly adapt it to being movie materiel, which of course meant that certain characters and scenes and violent action from the first game wouldn’t make the cut for this film, however with that said it still worked out pretty good and left the viewers with a chance to see a sequel which will have much more meaning then the first one.

, which is the relationship between Max Payne and Mona Sax, in the game, these two characters had suffered the loss of people they held so close to their hearts that they were two people who had nothing left to live for, and started out as enemies at first but later became allies they lived off each other’s lose as it became a bond that they shared and eventually became a passionate love that neither couldn’t live without, in a more simpler term it brought meaning to their lives once again and made them want to live once more, this however was not in the film and the tension between the two on film didn’t go any further then a bond of vengeance which they only seems to be interested in, hopefully this will be develop into something much more in the next film. But with these problems I’ve mention mostly all can be forgiven after witnessing the wonders that is the special effects, the way the FX and CGI go hand and hand in this film is a spectacular wonder to see, one in particular is how well they made the effects of the demonic angels, it really was an eye sensation for me and gave me goose bumps, the only thing besides everything else I’ve said here that was missing the most was, and I know I’m not alone here, but more bullet time the next time they make another film, on another upside the film does in fact go more into detail on what the drug “Valkyr” does to its users then the game ever did, now I know you keep hearing me say there’s going to be another film, well if you really want to know for yourself then stick around after the end credits and you’ll see an extra scene showing you that the tale is far from over and Max and Mona will be back, overall I despite the slight dislike to some parts of it here and there I still liked it quite a lot and wouldn’t mind giving it another go around some day on DVD.

The story is about Max Payne is a maverick cop--a mythic anti-hero--determined to track down those responsible for the brutal murders of his family and partner. Hell-bent on revenge, his obsessive investigation takes him on a nightmare journey into a dark underworld. As the mystery deepens, Max is forced to battle enemies beyond the natural world and face an unthinkable betrayal

As for the acting; first off Mark Wahlberg did a fantastic job

partying Max Payne in this film, I’ve read some critics say he couldn’t act, however I disagree with them, he did great job, it may not be Oscar worthy but who ever said the film’s acting had to be to begin with. Mila Kunis stole my heart in this film, for one thing I thought she could do this kind of role (action) however I was wrong, she did her best and her best won me over, true she looks nowhere near like the character from the game, but she does carry same energy that the character Mona Sax has in the game onto screen and make the character her own, I swear the more and more I see her movies the more and more I’m beginning to fall in love [Laughs]. Beau Bridges has been a favorite of mine for as long as I can remember, he and his brother are just outstanding in everything I’ve seen them in, and Beau does yet another outstanding job in this film, his acting is probably one of the best things in this film. Ludacris’s performance was a shocker for me, never did I think for a moment could he act, and sure enough the man proved me wrong, he may not do a great job at acting, but still an okay job, which is fitting for me taking everything else in the film of course. Chris O'Donnell was not so bad, although I felt as though he was lacking a bit, even for his standards, once upon a time he was well on his way to becoming a hug star, and now, he plays second string acting, he was a little bit of a lackluster to me and wasn’t fully needed. Donal Logue was okay, but in my opinion a bit too off his game, don’t get me wrong he’s a good actor an all, but he as I feel was a mismatched for this film. Amaury Nolasco did a great job as Jack Lupino, it gave the character that extra hint of psychotic energy that was needed to make it work, and it really came off him quite naturally. Kate Burton is a magnificent actress, however she was lacking a little too much for the role of Nicole Horne, for those of you who haven’t played the game, the character Nicole Horne was an egotistical conniving b**** who only looked out for her own ass, and I felt Burton just wasn’t really taping into that all that well. Olga Kurylenko was not so bad, although is this going to be her thing from now on or is she going to act in more than just video game movies (she was also in Hitman), either way it wasn’t a plus nor was it a negative to see her in this. Joel Gordon, Jamie Hector and Nelly Furtado just to name a few did pretty good jobs in this.

Finale Say: Max Payne wasn’t the best film of 2008 nor was it in any way near to being in the running, however that certainly doesn’t mean it was a bad movie ether, it’s just it tried too hard at times which worked against it which is why the midpoint seems slow and a little boring, but with that said I’d say that it’s something worth checking out if you’re in the mood to kill a few hours.

Copyright 2008 TCWreviews.com
All Rights Reserved
Posted by Clifford Kiyabu at 6:29 AM No comments: