When will celebrities learn? No matter how cautious or how well hidden one’s sexy little secret’s may be (I believe all actresses should take note from none other then Paris Hilton on this subject) so long as there is compromising photos or video of yourself in existence it will eventually see the light of day, it’s only a matter of time. 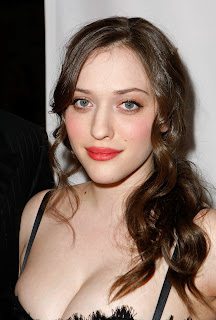 Actress Kat Dennings is the latest celeb to find herself stuck in the middle of a nude photo scandal. The scandalous photos of the ‘Nick & Nora’ starlet were leaked onto the Web earlier last week. The snapshots show the actress in some very compromising poses in her underwear while exposing her breast.

No word on how the actress is taking the upsetting news on this but the site that released them as since taken them off and replaced with the message: "Unfortunately, we've had to remove the photos as her attorneys have confirmed the photos belong to Dennings.”

While this is truly unfortunate for Dennings, the recent turn up of these pics have had some question whether or not the photos were stolen from the actress or whether they were sent to the site intentionally to build hype around her latest film ‘Daydream Nation’ which got mixed reviews at the Toronto International Film Festival.

Daydream Nation star’s Dennings as a seventeen-year-old who moves from the city to a small town in Canada where an industrial fire burns endlessly and everyone in her new high school seem to be permanently stoned.
Posted by Clifford Kiyabu at 6:20 AM