Last March Hollywood lost a great talent from the ranks. I speak of actor Corey Haim, whom during the height of his career (acting alongside best friend, Corey Feldman) was considered one of industry’s biggest child stars and teen ideal during the last years of the 80’s, but being on the top did not come with a price at such a young age as he struggled with the harsh truth of decline in popularity as the times changed due to substance abuse throughout most of his adult life which plagued his career and haunted his personal life. But before the final curtain call he was able to bring hope and satisfaction to his devoted and loyal fan base with the film American Sunset, which is now available on DVD and Blu-ray. 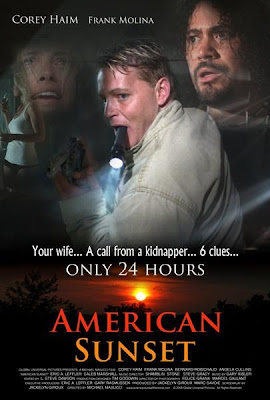 Due to an overwhelming demand from moviegoers, predominantly the late Corey Haim’s loyal fan base, Global Universal has launched the Company’s DVD sales division. With the Company having experienced a number of orders far in excess of what it had anticipated, just on the first day of availability, it was necessary for the Company to outsource the production of additional copies of the film.

“As is frequently the case with mainstream Hollywood, the movie has met its fair share of resistance. Corey Haim was a much admired Child Actor and Teen Heartthrob. His extraordinary talent was well recognized by distinguished critics at a very young age, firmly planting the establishment of his persona as the adorable little boy next door.” stated Jackie Giroux, American Sunset’s Producer.

“It’s well known how unforgiving Hollywood can be to grown up child stars, but the fans emphatically embrace him still… We have received abundant correspondence demanding an opportunity to see his final contribution to the film industry and the world. In the exclusive behind the scenes footage, Corey stated “I Want Everyone to See This Movie”, and his public will now have the opportunity to enjoy his exceptional performance in American Sunset. It is in his memory, and with this resolve that we move forward, passionately, to make this production, and others still to come, a smashing success.” concluded Ms. Giroux.

The Highly Acclaimed Film, American Sunset, features Corey Haim in his final performance as an adult leading actor. “Corey brought American Sunset to life with his outstanding performance.” stated Gary Rasmussen, CEO of Global Universal Film Group. He continues: “Between the talented cast, the exceptional directing, and the spellbinding plot of this film, it leaves nothing to be desired but a need to watch it again. We expect our internet sales to reflect these factors, as the popularity of this film continues to grow.”

American Sunset unravels a mysterious conspiracy with numerous spellbinding plot twists revolving around a kidnapping ploy that robs a devoted husband of his true love, while playing a game that prolongs her safety by correctly responding to the kidnapper’s riddles. One wrong answer means fatal consequences. As the pursuit to save his wife plunges Haim’s character deeper into a corrupt world, the greedy, deceptive and immoral motives become increasingly obvious; this is not just a random kidnapping for money, this is deadly personal.

The Movie, American Sunset, is NOW AVAILABLE in DVD and Blu-ray for distribution worldwide on the film’s Official website: AmericanSunsetTheMovie.com. Please visit the site and view the trailer.


Here's a clip of Corey talking about American Sunset

This film will make for the ultimate gift of the holiday season for any fan of Corey Haim as it generously displays his graceful comeback before his unfortunate passing.

Posted by Clifford Kiyabu at 2:27 AM