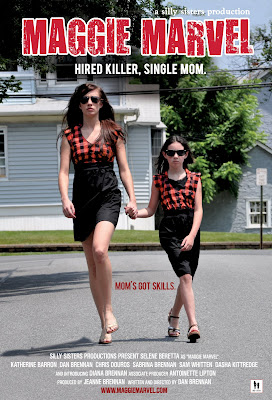 Plot: A single mom never has it easy. Maggie Marvel must balance career and family, murder and math homework. She is pushed into this dangerous world…only to find out she is very good at it.

The Story is about: A dark comedy about a single Mom named, Maggie Marvel (Selene Beretta) who moonlights as a contract killer for her estranged father’s crime syndicate to help her deal with anger issues. After years of killing, she’s finally hit the big question, is this the life she wants for herself and her daughter, Samantha (Diana Brennan). She’ll soon find that walking away is simple being said than done.

My Thoughts: In both the insect and animal kingdom, the female is often at times revered and considered more deadly then the male of the species, they’re majestic and exotically beautiful, much like their human counterpart. And yet the thought of a female Hitman (or Hitwoman to better phrase it) seems to be farthest from our minds, women harbor all the characteristics and skills to be the perfect killing machine that you’d never see coming until it was to late, and yet they aren’t respected as such. I often ask myself why, why aren’t there more films based on female professional contract killers, is it a sexist thing? Is there not enough real life stories to base it on? Or, could it be the fear that alludes us, the hard truth of realizing that women give life, thus they can take it away too.

had the pleasure of reviewing the outrageously hilarious film The Video Guys a comedy which hit home run for me because it was the perfect shining example of the genuineness that can arise from when mixing comedy and independent filmmaking together. Since that film was realest I’ve kept a close eye on the film’s director, Dan Brennan, and what his next project would be. I was thrilled when I heard his next film Maggie Marvel (2010) was going to be a dark comedy which focused on a struggling single mother trying to balance raising a daughter by day and working as a contract killer by night. Maggie Marvel (Selene Beretta) a single mom who works for a crime syndicate run by her own estranged father, who’s crime organization follows a simple rule, the men handle the business end of the organization (racketeering, lone sharking, bank robbing, and keeping their partners and competitive in check,) while the women take care the less Savory side of the business that involves getting your hands a little dirty (assassinations, clean ups, and such.) Much like his previous film, MAGGIE MARVEL plays out as yet another shining example for movie goers around. This time however, showcasing that equality between men and women work on all fronts, including that of being a killer for hire. Before I jump into dissecting this film apart I must stress that going into the film I had some concerns which was worrisome over whether or not the film would be able to live up to the bar that was set, and serve as a proper follow up to that of last year’s THE VIDEO GUYS, but to my surprise the film carries that same oddball sense of humor that had people crying with laughter, but this time in a slightly darker tone.

The film was noticeably cheesy but in a good way, it’s whole premise was set in a co

medic dark overtone that worked incredibly well because it was unorthodox to that of other dark comedies that‘s become quite common in it’s genre these days, which singles this out as a one of a kind film to experience. Now of course that doesn’t go without saying the film had it’s problems, though the film carried the same spirit and essence of Brennan‘s other film, it’s plot was all over the place and not as centered as I’d have liked it, the writing was great, and it had something going for it, but it ultimately felt a little rushed in my opinion, but showing a lot of promise. The problem I had with the film is that it had just too much going on at the same time that it‘s hard to keep sight of the main things that mattered at times. Aside from it’s lovely plot It had a terrific and interesting sub-plot involving Maggie’s daughter, Samantha, dealing with her mother’s ’Job’ and coming to terms with it, but than a handful of other potential sub-plots present themselves out of no where, and while all of them have their potential there just wasn’t enough time in my opinion to settle them all in one film, the second problem was that the film felt like it was trying to hard to be just like it‘s predecessor when in fact both film are really in different genres. However in hindsight to what I’ve said, I still had a fantastic time at the movies with this one, after viewing the film and sitting back to let what I’ve seen wash over in my mind, I’ve come to terms with the problems that was presented in the film, because it’s become quite clear that what I’ve seen as potential mistakes are actually part of the movie going experience which I’d believe to some extent was intentional by the filmmakers. It didn’t come near to being like TVG, but it certainly wasn’t bad either. Overall, I believe this is a worth watching film, especially with others in your company as this is a film that will have people laughing, crying, and hopefully leaving with a touch of satisfaction in the end, which is what really matters in my opinion. 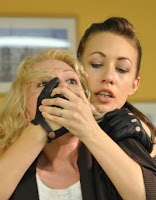 s for the acting: well what can I say, the acting is the crown jewel of the film’s best qualities, which is due in part of two factors; first, each and every actor really put a lot of effort into their performance, and some even go the extra mile. And Two; much like TVG, it’s a family affair with this ensemble cast of the director’s good friends and family members starring in the roles. Selene Beretta did a fantastic job in the role of the film’s titled character, Maggie Marvel. Her performance shined with gold stars in my opinion, she really went t there with dedication for the character that gains my respect. Diana Brennan did a fine job in the role of Samantha Marvel. I found her performance to be quite impressing for someone so young, she came across showcasing the type of experience you’d expect from an actor with more years on them. Katherine Barron was good, though I felt she went a bit too much on the accent of her character, Miss Dixie Brown, I get it that the character is supposed to be from the south, but I feel it was just a bit overdone, and this is coming from someone who’s got quite a few southern friends just for reference. However I found the performance (accent aside) to be quite enjoyable and played a nice part to that of the overall experience. Dan Brennan was fantastic in his performance, from what I’ve seen so far from this film and his previous film and acting gigs is that; he’s shown that he’s a jack of all trades in the field of film, may it be writing, acting, or directing, the man sure knows how to make a movie going experience a pleasing one. Dasha Kitterridge performance as the film’s villain per-se (Well I wouldn‘t say villain really, more like an obstacle presented in the film for the Heroin to deal with really) wasn’t bad, though I found her performance to be a little cheesy at times and a bit hard to swallow, it was still entertaining though, because she managed to pull off one of the most important fact’s of being the female villain, and that’s being able to pull off being sexy as well as devious equally at the same time. Sabrina Brennan was great in the role of Polly Poisen, though she wasn’t playing as big a character as she had done in TVG, she still did a fine job that was note worthy. Aside from who’ve I’ve already mentioned, the rest of the cast was great! It was nice seeing Russ Camarda and the rest of the TVG’s cast appearing in various roles in this.

Final Say: Maggie Marvel was an exciting experience for me, though it was rough around the edges at times, the film was definitely a decent change of direction in terms of film’s in it’s genre go. It never failed to lose my attention for one moment. Director Dan Brennan get’s kudos by me for taking the leap that others have tried in the past and often failed at. And hopefully we’ll see more films like it soon enough. I recommend it!