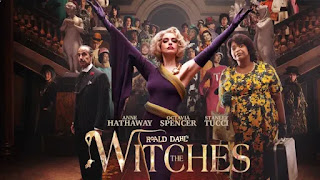 Review:  I was skeptical about this remake/reimagining of the 1990 classic The Witches, which in it self is based off of the 1983 novel by acclaimed author Roald Dahl. The 1990 original was universally praised by critics, and deservingly so. The film was fantastically dark and witty, and at times grotesque. the fact they were able to get away with doing certain things and maintain a PG rating is truly beyond me. the casting for it was also perfection. Anjelica Huston who played the head witch wowed audiences with her captivating performance. Something she would no doubt repeat less than a year later while portraying Morticia Addams in the 1991 box office hit The Addams Family (1991). Simply put, the 1990 adoption is a true classic, and it’s incredibly hard to not judge any updated adaption without comparing it to it’s predecessor.
The 2020 reimagining is by no means a terrible film. I mean, it’s definitely watchable, and audiences of a younger age will no doubt find some level of enjoyment out of this updated version. It certainly has quite a few corks and some heartfelt moments that even had my heartstrings tugged at times. And it does follows the novel much closer in certain areas that the 1990 film hadn’t. But, just like 2005’s Charlie and the Chocolate, following the source material doesn't necessarily mean a superior product. [SIDE NOTE: I actually loved the Johnny Depp reimagining, just not nearly as much as the 1971 classic starring Gene Wilder]. But I digress. The 2020 reimagining wastes absolutely no time at all as it hits the ground running from the very beginning and doesn't really slow down. It’s bigger, louder and much more flashy with the theatrics. But it’s lacking the spirit of the original. The original was slower in pace, less cartoony, and focused more time fleshing out it’s core characters. In the original there is a story the grandmother tells her grandson about a young girl in her village, who was kidnapped by a witch and imprisoned in a painting that hung in her parents home. The young girl lived her whole life in that painting unable to escape or communicate with her family. This story is incredibly dark and utterly heartbreaking at the same time. This scene in particular is so tragic and disturbing and its always stayed with me growing up. As an adult it horrifies me more than most R-rated horror movies, and that’s saying a lot coming from a horror buff such as myself. The reimagining does have a similar scene in which the grandmother tells her grandson a tragic story about a childhood friend being taken by a witch, but it doesn't carry the same eerie atmosphere as the original and is for the most part pretty forgettable. Later on in the film theres a moment when the missing girl is briefly mentioned and it took me a few minutes to remember it’s the name of the girl from the grandmother’s earlier story.
The one thing the film does get right at least is the superb acting. I adore Octavia Spencer, she’s a talented actress who really gives it her best in whatever role she takes on, and The Witches is no exception. She breathes a level warmth and sassiness into the role that is genuine to the lighter tone of this adaptation. Honestly, I wish she could be my grandma! Ann Hathaway is also pretty amazing as the head witch as she delivers a very colorful version of the character that is pleasant, and sometimes hilarious to watch, but the one major drawback is that some of her best moments are spoiled by an over-abundance of CGI. Which let me just say, the special effects is arguably the film’s achilles’ heel. There are moments in which it looks half decent and passable, but most of the time it looks dated like something straight from the early 2000’s. Overall it’s pretty bad, and likely could have achieved better results with more practical effects like with the original. The witches in that, especially the head witch, was genuinely hideous looking and creepy. The design in the reimagining looks basic and very unimaginative.
Final Thoughts: The Witches isn’t a terribly bad movie. It set off to do it’s own thing and should be commended for not going the route previously traveled.  It has it’s moments, and it can be a genuinely fun film for the whole family to watch together on movie night. But it’s a far cry from the superb quality of the original.
Rating: 5/10
Posted by Clifford Kiyabu at 8:35 AM