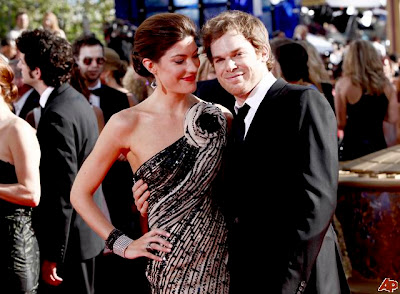 I hate having to report break ups, especially two in the same day, but what choice to I have but to either report it or ignore it? and believe me ignorance no matter what shape or form is ignorance none the less. Apparently on the same day that Ryan Reynolds and Scarlett Johansson’s divorce was announced another divorce failing was also announced, Showtime’s hit show Dexter star Michael C. Hall and co-star actress Jennifer Carpenter have reportedly called it quiets with they’re marriage. Hall’s rep confirmed the news in a statement sent to Entertainment Weekly.

“Having been separated for some time, Jennifer Carpenter and Michael C. Hall have filed for divorce.”

Both Michael C. Hall and Jennifer Carpenter’s reps added that the split was “amicable“. this coming at a rough time for Hall, who This announcement came at a bit of a surprise seeing that Michael went through his battle with cancer earlier this year, and it seemed like ordeal only strengthen he and Jennifer’s relationship. But I guess with time things change.
Posted by Clifford Kiyabu at 5:12 PM