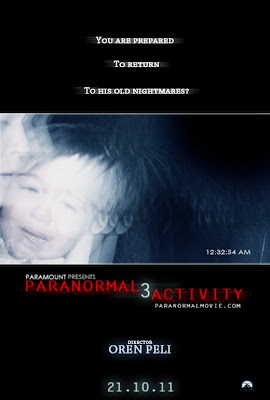 In 2009 the film Paranormal Activity proved that one doesn’t need big name stars or a successful filmmaker behind the camera to make a decent horror. All one needs is a committed enough cast and crew, the right setting and a hang nail budget ($15,000 to be precise), and you can be just as terrifying as the major league players. And with just under $200M at the box-office I think it’s safe to say they executed it spot on.

So it was pretty obvious that the studio would eventually go the ‘SAW’ rout with the franchise and capitalize on it while it was the ‘In’ thing to watch. And who could blame them, as the saying goes “Strike while the iron is hot!.” Well, apparently that’s precisely what Paramount Pictures is planning to do, as there is already a - are you ready? - Paranormal Activity 3 in pre-production! In an interview with Dread Central, director and producer, Oren Peli, stated that Paramount Pictures has given the green light to begin production of Paranormal Activity 3. It is planned to be in theaters on October 21, 2011.

Now I admit I’ve never dabbled in the series myself by watching any of the films nor have I had any desire to do so anytime soon… however, after closely examining the budgets and revenue of both films there may me be a sign of decrees in profits for the franchise further down the road, if you look at the first film, which cost roughly about $15,000 or so to make and pulled in a pinch under $200M, yet it’s sequel, though still pulled in a very impressive take at the box office (somewhere around $163M) the budget for it was significantly higher then it predecessor by a cool $3M. Now I’m no mathematician or a big city lawyer, but I certainly hope that the big wigs over at Paramount are doing their own statistics too, because judging by the vast number of negative reviews maintained by film critics over how the sequel ’Went’ wrong, it’s pretty safe to say that if they don’t correct the mistakes made in the first sequel with this third upcoming installment then the franchise could meet an early demise.
Posted by Clifford Kiyabu at 5:41 PM