There’s a great many things in my life I don’t expect to read or write about due to the possibilities of it happening in my lifetime being very grim. Among those listed are; Aliens arriving to earth, seeing the national deficit paid off in full, seeing the first time machine invented, witnessing a real life clash between Ninjas and Pirates on the open seas, and peace in the middle east. Yes I know the odds of any of these happening in mine, or anyone who’s currently alive right now’s lifespan for that matter is pretty far out there. Also among my list is a saying combination of words I’d never expect to say in a million years, but as they say there’s a first for everything, right? Well here goes nothing; want to see Mel Gibson put his fist in Jodie Foster’s Beaver? 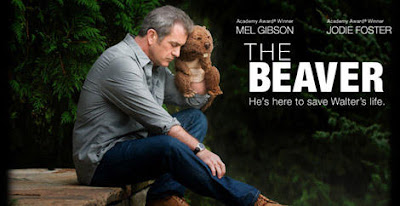 …well maybe not in the way you were probably thinking but I forgive you for having your mind stuck in the gutter, anyway the film THE BEAVER has Mel Gibson starring alongside two time Oscar winning actress Jodie Foster, who also happens to be the film’s Director.

Check out the Trailer for this upcoming film:

The synopsis: Two-time Academy Award winner Jodie Foster directs and co-stars with two-time Academy Award winner Mel Gibson in THE BEAVER - an emotional story about a man on a journey to re-discover his family and re-start his life. Plagued by his own demons, Walter Black was once a successful toy executive and family man who now suffers from depression. No matter what he tries, Walter can't seem to get himself back on track...until a beaver hand puppet enters his life

The Beaver is set for a spring 2011 release.

I think many will agree that 2010 hasn’t exactly been Mel Gibson’s best year. Aside from a fairly decent film (Edge of Darkness 2010) this year hasn’t been too kind to him with allegation of threats and abuse mountain on as well as having a brutal custody battle with his Ex-Girlfriend Oksana Grigorieva.

However with that being said I can’t help but feel bad for the guy a little. Yes he’s been a bit of a booze hound in resent years, and sure he’s said some pretty crazy stuff that would have someone like Hitler jumping up and down with glee. He’s said and made quite a lot of bad decisions over the resent years that would have to be completely blinded by ignorance to not have known anything of it, but with that being said I guess what I’m getting at here is that Mel’s no saint he’s been awfully clear about it, but he’s only human so let’s cut the man a break already!
Posted by Clifford Kiyabu at 10:08 AM