HP Star Called Back For Re-Shoots After New Haircut!

For almost a decade, fans have basked in the glory that is the Harry Potter films, while the stars of the series have been hard at work for well over a decade. Now, with Book seven part 1 out in theaters and it’s second half on it’s way, the series is sadly coming to an end. With everything said and done the world eagerly awaits to see what will become of these stars outside of the HP films. First up would have to be none other then Emma Watson, who’s already taken the first step in shedding her ‘Hermione’ look by chopping off her signature hair in celebration to the closing of the series. But sadly the starlet may now be regretting doing so after receiving word that co-stars Daniel Radcliffe, Rupert Grint and herself is being called back in by the studio for re-shoots on the final scene that takes place some 19 years later. 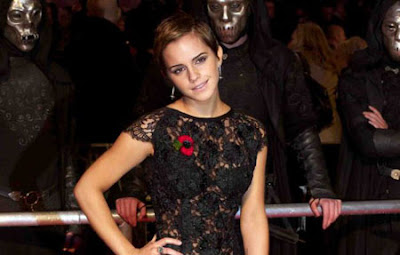 The 20 year old actress said in an exclusive interview with Metro that she “didn’t get to experiment with dyeing and chopping off ” her hair and that it “felt, right”

“I’m 20, I’m not a little girl any more. I’d been on Harry Potter for ten years so I needed to mark the end of it in some way. I needed a drastic change and that’s what the crop was all about.”

Read the full interview with Metro

Watson’s new haircut became the center of attention when it was first debuted after rapping of the HP series. It’s most likely that Watson will have to wear a wig for the scene, but hopefully she’ll take this as a lesson learned before attempting to do something like this again without considering the possibility of having to go back in for re-shoots in the future. Emma Watson is set to appear in the upcoming film My Week with Marilyn (2011) which is set for a TBA 2011.
Posted by Clifford Kiyabu at 10:30 AM