Since the start of TCWreviews.com, we’ve pride ourselves with the notion that we present to our readers with critiques built on high standards and quality writing, presenting only honesty and an unbiased moral high ground, though because we allow vast freedom of speech among our writers, there’s always going to be a spin zone due to difference of opinions, and from time to time one or more critics here will voice their opinion in a completely different direction of the others. So in the sprite of outspoken voices we at TCWreviews would like to present a new exciting edition of Critic Vs. Critic!

Tonight TCWreviews’ Editor in Chief and Chief film critic Clifford Kiyabu sits down with fellow film critic, columnist and colleague Kelsey Zukowski. In this edition of Critic Vs. Critic: we talk about Dimension Films successful remake Halloween (2007) and it’s not so well received sequel Halloween II (2009) written and directed by Rob Zombie. 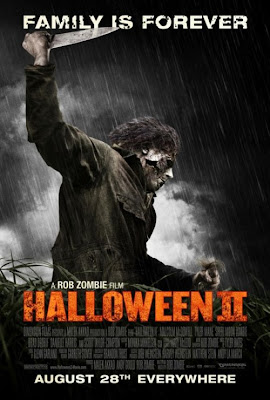 Kelsey: The sequel was messy, but I love it, flaws included. It just had so much guts and I respect the hell out of the film and Rob Zombie for going in such a bold direction. He gives us a completely new identity to Michael Myers. I understand fans being pissed about this and not accepting it. To enjoy this movie you have to let the mysterious, silent Michael Myers go. Halloween 2 is all about unmasking Michael. It is a re-imagining and just one possible theory of what a maniacal murderer like Michael Myers might have bottled up inside of him. Myers has always shown a cold blooded hatred for his family, but it’s interesting how his outlook on family is presented here. Perhaps he didn’t hate his entire family. Here family actually appears to be a value of his, something he fights and strives to have close to him. They give him his identity and without Laurie, there is still piece to the puzzle missing. That night was about eliminating the poison that constantly tormented both him and his mother.

As far as Laurie goes, I would argue she wasn’t the good girl next-door type that she was in the original series. In Rob Zombie’s Halloween Laurie was much more sassy and audacious. There is a transition between the first and the second movie with Laurie though. It is a change I welcome though. In case you didn’t know anti-social rocker chicks are cool. Seriously though, don’t you think she would change after what she had been through? There are darker tones within her and she hits a rebellious streak, she really has to if she is to have any hope of keeping any sanity in tact.

We are in agreement on Loomis though. His character is one of the better hero characters in slasher history. In the remake they stayed pretty true to the character. I hated him here, a sellout who was just out for a quick buck. That is not even Rob Zombie’s Loomis and I’m not quite sure why he made that change. Loomis was always desperate to protect the world from the monster he witnessed evolve over the years. There have never been ulterior motives.

I agree that the opening rocked, but I’m glad it was just an introduction and the whole film wasn’t set at the hospital. You have to remember this is not a remake of Halloween 2, it’s a sequel to Rob Zombie’s Halloween. As we’ve discussed there’s a big difference between the two. The fact that Zombie used this to pay homage to the original Halloween 2 was very cool. It had a surreal vibe to it so the dream sequence worked out fine, while still branching away and being its own film. It might have had a lot going on, but I just feel like there was no holding back or rehashing of previous films in this one. It was completely it’s own creation and a surge of exhilaration. 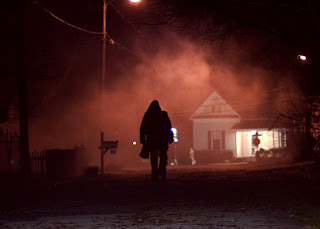 Clifford: Oh don’t get me wrong Kel, I respect Zombie for wanting to “go there” in terms of taking a big risk, I mean you’d have to have a pretty big set of cojones to even think about going the rout Zombie went with the sequel and yet he did [Laughs] thing is I don’t mind having filmmakers change things up for the icons we all know and love every once in a while. However my dislike to what RZ did with the sequel was that it didn’t feel like a Halloween movie at all, it felt like I was watching the sequel to The Devil’s Rejects instead, and though Devils Rejects is one of Zombie’s better films, a Halloween film it is not. There are certain aspects of a horror icon that needs to be addressed and respected above all things, and what defined Michael Myers was 1; His mask which concealed the true face of evil from the world much like the hockey mask did for Jason Voorhees, and just like the Jason‘s hockey mask, Michael‘s ghostly white mask is what makes him stand out so notably to the majority of moviegoers and 2; His deadly ability to remain stealthy and imaginatively clever in any situation. Without any of these attributes he would be just another hulking juggernaut rampaging through obstacles pointlessly like any other carbine copy slasher.

As for Laurie, I can see your point of view with the development of the character and how she went down a spiraling path of self-destruction after surviving the eye of the storm that was Michael’s killing spree. And yes I agree, rocker chicks are cool and very likeable, but Laurie was not. She was neither likeable nor cool. In the first film I wanted her to survive and prevail the nightmarish horror Michael put before her, but I wanted the complete opposite for her in the sequel, all I wanted for her character to do in part 2 was to bite the big one because I could not for the life of me like any fiber of her being, and believe me I tried real hard to understand the pain she was going through but no matter how you look at it she was just a very unlikable person in the sequel.

All and all, with a few tweaks to the plot this film would have been a fantastic idea for stand alone horror film that was not attached to the Halloween series. But Rob Zombie still gets kudos from me for effort, though it was a horrible film in my opinion, at least he tried to make a worthy sequel to his 2007 blockbuster remake. Do I blame her for this disastrous sequel? No, I blame the studio execs who relentlessly approached him to do it even though he admitted he didn’t have it in him to do another Halloween film. Had they listen to his honesty maybe we would have ended up with a moderate sequel instead of this underwhelming attempt. My rating for both films are: Halloween (2007) 8/10, Halloween II (2009) 5/10. 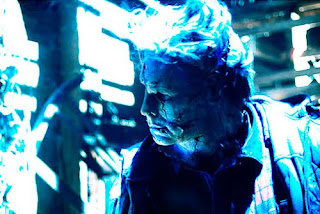 Kelsey: I can see where you're coming from, because it's a whole different animal from the original series. That was too big of an issue for some, but I was able to really enjoy the new series. This is actually kind of reminding me of our debate on the Nightmare remake where you were arguing that this was the new Freddy/Nightmare franchise and it was something separate from the original. Personally, I think this was the far better revamping and something that I can not only accept but admire as the Michael Myers of today. Even if you don't agree perhaps put in those terms you will see the merit I think it holds.

We are just going to have to disagree on Laurie. I think she is more likeable in the sequel than the original, where I cared less if she was killed. Sometimes you just don’t like certain characters and there’s no reason why you should care about what happens to them. I can see the entire film falling apart in this case.

I don’t think it’s that Halloween 2 was like another Devil’s Rejects, it just incorporated the style that Rob Zombie has become accustomed to. There were a few things that did seem excessive. I usually have no aversion to swearing in films, but especially in that beginning death it seemed way over the top and forced. I also did have a bit of an issue with the hulking brute Michael Myers. I like the new philosophy, story, and mindset of Michael Myers, but not the form and technique. Michael Myers was never a monster in size, always in mind. The technique of the kills are really animalistic and lingering. Myers always had a swift, emotionless form to his killing, as if it was effortless. This only made him seem like more of an immortal monster. Here it almost looks like he is trying too hard. It really shouldn’t look like work.

I will give you that some of the mother/young Michael/horse psychological elements do get a little confused amongst some of the other themes. I still appreciated that something so different was done with the film, making it exciting to watch and see where it would go next. These elements did add to the mental haunting that Laurie went through even if it was a little messy. I do honestly feel it took what the first film did, just scratching the surface, and took it to the next level.

And that concludes the Co-review of Rob Zombie’s remake of Halloween (2007) and it’s sequel Halloween II (2009). While I loved most of the ideas the remake brought to the table, it’s sequel I did not, one thing we can mutually agree on is that whether we like it or not Zombie’s Halloween remake is a film for the next generation of horror moviegoers. Though I’ll happily stick with my classic 1978 original I’ll just have to accept the sobering fact that this disappointing sequel to a decent remake is here and by the looks of it, to stay. However I will gladly accept any idea future filmmakers will offer up to the table once more sequels are pumped out by the studio (and I‘m almost certain they will) Kelsey on the other hand greatly enjoy the sequel for the very things I disliked it, and while we have difference of opinion on the we both can mutually agree to disagree.

However despite what you’ve read here between us it’s still up to you, the reader, to decide if you agree or disagree with any of the opinions laid out here, and if you’re still not sure then by all means take the leap of faith and find out for yourself. I want to thanks Kelsey Zukowski for taking the time to sit down and have this little chit-chat about one of the most revolutionary film icons in horror cinema. We invite you to join Kelsey and I again as we debate it out like maniacs in the next edition of CRITIC VS. CRITIC! Coming Soon.

READ THE FIRST HALF: HERE
Posted by Clifford Kiyabu at 12:08 PM