Since the start of TCWreviews.com, we’ve pride ourselves with the notion that we present to our readers with critiques built on high standards and quality writing, presenting only honesty and an unbiased moral high ground, though because we allow vast freedom of speech among our writers, there’s always going to be a spin zone due to difference of opinions, and from time to time one or more critics here will voice their opinion in a completely different direction of the others. So in the sprite of outspoken voices we at TCWreviews present a new exciting edition of Critic Vs. Critic!

Tonight TCWreviews’ Editor in Chief and Chief film critic Clifford Kiyabu sits down with fellow film critic, columnist and colleague Kelsey Zukowski. In this edition of Critic Vs. Critic: we talk about Dimension Films successful remake Halloween (2007) and it’s not so well received sequel Halloween II (2009) written and directed by Rob Zombie. 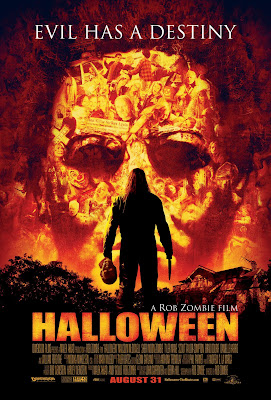 Clifford: John Carpenter’s 1978 iconic classic slasher film, Halloween, set the tone for slasher films everywhere by simply masking it’s antagonist, an escapes psychiatric patient from Smith's Grove Sanitarium named Michael Myers, in nothing more then a mechanic’s jumpsuit and donning a pale white mask. With absolute silence fueling his undying determination, this little known killer known originally as “The Shape” would soon become a world renowned icon. Fast forward six sequels (not counting Halloween III: Season of the Witch for obvious reasons) and 30 plus years later, what we have is a household name built on the misery of Michael Myers’ victims. The franchise has easily had a highly successful run finically even though the series may not have been well received critically all the time and has had it‘s fair share of blockbuster stardom with a slew of top notch celebrities taking turns to face off and become the latest victim of Michael’s merciless mayhem. I’m normally against the idea of remakes because 99.9% of the time they’re not warranted nor necessary and are usually insults to that of the original material, however with that being said and despite a do over for the franchise not being desired by fans, the series ended on quite a low mark with Halloween: Resurrection (2002) as it‘s final note, which was not the franchise’s proudest moment I must say, it was time for a fresh kick start back to basics for the whole franchise.

Just like the majority I had no expectations what-so-ever for the remake since past remakes on such iconic figures had turned out to be utter failures and downright disastrous. However, to my surprise, Rob Zombie’s 2007 remake turned out to be a huge success, because it stuck close to the source material while at the same time expanding the back-story of Michael Myers and dared to ask; what fueled his murderous rampage? The remake provided a profound look into Michael’s early years at Smith's Grove and showed the chilling transformation of a misguided young boy turned monster which was greatly absent in the original, the remake even begs the question; are monsters created or born? Zombie’s Halloween left this opened to debate among viewers with a big question mark, because while some will say it was in part of Michael’s upbringing, others like myself, feel there was a darkness lurking about in him deep down inside and his time at Smith's Grove only further the advancement of this developing darkness. My only true beef with the remake is I did not like Zombie’s hulking take on Michael Myers which turned him from the sleek illusive silent, yet crafty killer to an unstoppable juggernaut. 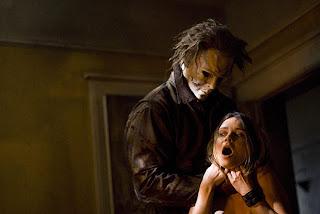 Kelsey: The Halloween series really didn’t end on the best note with Halloween: Resurrection, even though I do enjoy it on a fun, cheesy note. “Trick or Treat Mother F***er!”. Perhaps this is one reason for remakes since most series don’t end on their best note otherwise they would keep on making sequels if they think there’s still potential with the series or even as long as people will keep on seeing the films. Still, I don’t think there’s any real question that the Halloween remake was not at all needed. John Carpenter’s Halloween is a classic that painted a mysterious and silent killer, clearly tormented and vicious. There are slashers that predate it, but Halloween was one of the most prolific that heavily inspired the entire sub-genre of horror. Of course there is no way a remake could be better and most likely would just take away from the original.

With Rob Zombie directing I actually did have some faith even though I still had my doubts as well. House of 1,000 Corpses might be flawed, but The Devil’s Rejects remains one of the best horror films in the past decade and really showed just what Zombie was capable of as a filmmaker. Also, just the fact that he is clearly a fan of the horror genre meant a lot considering half the time these remakes are made by people who couldn’t care less and just want to take short cuts to make a profit off of watered down material that was originally terrifying, intriguing, and iconic. RZ clearly was going to make an effort, whether it failed or not was the only question. Honestly, I can appreciate that enough, that it was an honest effort.

Personally, I really enjoyed and appreciated a lot of things about the movie even though I think it is a flawed film in the end. It’s really that creation of a monster that makes the film stand out. RZ shows us another side to Michael Myers. Bringing something new to the table is exactly what a remake should do, otherwise why bother remaking it? Zombie dives in to his past and brings a new light to how Michael Myers became such a brutal monster, leaving any sense of humanity far behind. I think it’s a mixture of being born a certain way and his surroundings and upbringing. He had a bad home life and was constantly picked on in school. It only makes sense that he needed an outlet to hurt those weaker then him. Of course, with murdering most of his family, revenge was a part of what set him off and led him on the path to becoming an instinctual serial killer. It was really the first half hour or so, showing this uprising that I found fascinating. Towards the end, it’s the same Michael Myers slashing we have seen a million times before. There is no real problem with this since it is a recreation not a sequel. Still, it almost felt like two different films and I just thought the first one offered a hell of a lot more. 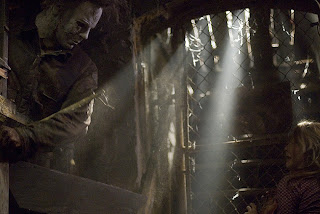 Clifford: I concur with you wholeheartedly Kelsey, Zombie had something great going with the opening half hour of Halloween, he created a fascinating back story on Myers that I feel the original franchise did terribly on (Halloween 6: The Curse of Michael Myers was a poor attempt at trying to make sense of why Michael did the things he did. Still though, it was fun watching), but the second half of the remake felt different, it was like watching two completely different films. First you have a deep meaningful look into the creation of a monster in a complete possible scenario, and in the hype of it’s own originality it became the same recycled storyline we‘ve all seen and live through before (not that it’s a bad thing).

However, though flawed, the remake turned out to be quite enjoyable and deserves to be noted as one of the better remakes in recent years, and unlike most films where the unrated, extended or directors cut usually prove to be superior to the inferior theatrical cut, the theatrical cut actually turned out to be more grounded and more coherent then it‘s Unrated companion. What I didn’t care for in the remake was the rape scene in the sanitarium because it felt out of place and was not needed and quite frankly there was no logic behind it. I mean seriously, what man is going to rape a girl in the presence of a violently insane man? (and built like a juggernaut I might add).

Now with that being said. It’s sequel was a total mess [Note: I viewed the Unrated Cut not the Theatrical Cut of Rob Zombie’s Halloween 2]. Make no mistake, the opening scene at the hospital was outstanding, it paid homage to Rick Rosenthal and John Carpenter’s 1982 sequel. But then when it is revealed to be an extremely drawn out dream sequence, I thought less of it paying tribute and felt it was more like it being rudely insulting to the franchise and to all it’s loyal fans who built it up from nothing. There was too much going on in this film to fully understand half the things that was happening, RZ wanted fans to see the mysterious connection between Michael and his sister Laurie, okay I can dig that. But then he wanted to go further down the rabbit hole with going out of the norm and into insanity of Michael’s mind which I could appreciate as well, but then he wanted to explore the more human side of Michael we never saw before. That’s when things got both confusing and incoherent.

Zombie tried to do too many things at once which I feel canceled out everything that was going good for it. The story was incoherent, the characters where completely unlikable which is disappointing since I really cared for the well being of every characters in the first film. Laurie’s transformation from nice small town girl to anti-social rocker chick was a terrible idea. And Dr. Loomis had no place in the film, where he played a superior role in the remake’s plot he played little, if not no role at all aside from showing up in the sequel. Sheriff Lee Brackett was a complete waste of a good character. Ultimately it was seriously disappointing, RZ poured too much of his own film works into this movie (House of a 1000 Corpses kept coming to mind) that the film lost it’s identity in the process. I don’t blame Zombie with most of the fault however, he said it himself that he didn’t have it in him to do a sequel, but the studio pushed him into doing it. So kel, what’s your 2 cents on the sequel?

READ THE SECOND HALF: HERE
Posted by Clifford Kiyabu at 3:05 AM