It’s that time of the year again, folks. Can you smell it in the air? Or hear it in the streets? How about read it on the internet…? No? well I’ll give you a little hint, it’s one time a year when every comic book store and memorabilia shop is as silent as a library, when most 20-somethings finally abandon their basement dwellings long enough for their parents the give it a decent airing out. It is the only time when Artist and Writer’s are greeted by their humbled fan base, a time when actor’s and filmmakers converse face to face with the hardcore movie buffs who’ve eagerly awaited this moment once a year to ask them a question. It’s a time when oddly dressed onlookers can ogle the lady parts of a booth babe without the risk nor fear of being charged with harassment [Laughs]

What time is it?, it’s time for COMIC-CON 2010!!! That’s right people, the biggest day for comic nerds and movie hogs like myself in the whole year! (For those of you who don‘t know what I speak of, please stop reading now because you’ll only make you’re head hurt due to a lack of understanding. But know this; Comic Con is the equivalence to comic book geeks and moviegoers as the Super Bowl is to football fans.) As Comic Con officially kicks off, the sharks have gathered, and blood is in the water, oh will it be a feeding frenzy of special announcements and surprises this week! But none other than an interesting bit that was forwarded over to me courtesy of Wendy Shepherd of studiomatrix.com, which I believe will be of some interest to those who’ll be attending. 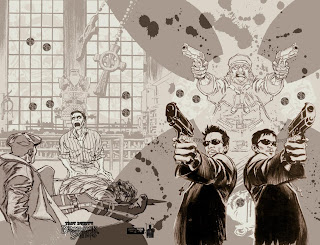 Featuring guests from comics, television, and film, the 12-Gauge
Comics’ booth (#2045) will be loaded with action!

TROY DUFFY, the creator/writer/director of THE BOONDOCK SAINTS film
series (and the creative force behind 12-Gauge’s smash-hit comic
series, BOONDOCK SAINTS: IN NOMINE PATRIS) will be joined by BOONDOCK
SAINTS stars SEAN PATRICK FLANERY and DAVID DELLA ROCCO! Don’t miss
Troy and Rocco’s one and only convention signing Saturday at 4:00
(featuring free movie and comic series posters) and the Prime Time
Saturday Night panel (12-Gauge Comics: Boondock Saints: The Comic
Series!, 7:30 pm, Room 9) where Troy and co-writer J.B. LOVE will
discuss the next installment of the comic series, and the entire crew
will take your questions on all things Boondock Saints, including the
new iPhone game!

But that’s just the beginning – New York Times #1 Bestselling Author
and 4-TIME World Heavyweight Champion MICK FOLEY will be appearing
EXCLUSIVELY at the 12-Gauge booth to promote his upcoming comic series
R.P.M.! Joined by co-writer SHANE RICHES, Mick will be on-hand
throughout the day Saturday to fill you in on all the details of his
pedal-to-the-metal action adventure series, and to autograph R.P.M.
posters and the Comic-Con Exclusive R.P.M. Ashcan – sponsored by
Poynt, poynt.com – both FREE with every Mick Foley autograph!

Finally, be sure to get your hands on the Comic-Con exclusive editions
of the BOONDOCK SAINTS: IN NOMINE PATRIS #1 & #2 – featuring sketch
covers by acclaimed artist CHRIS BRUNNER!

12-Gauge Comics: Boondock Saints: The Comic Series!— Troy Duffy, the
writer/director of the cult-hit films The Boondock Saints and The
Boondock Saints II: All Saints Day, takes you behind the scenes of his
comic trilogy, In Nomine Patris. Find out what’s next for the McManus
Brothers and Il Duce, as Duffy and comic series co-writer J.B. Love
fill you in on their plans for the next exciting storyline. But that’s
not all…get a sneak peek at the new Boondock Saints iPhone game, and
as an extra-special treat, David Della Rocco (the beloved “Rocco” from
the films) will be taking your questions during the Q&A session!
Moderated by comic series producer Eben Matthews and 12-Gauge
publisher Keven Gardner (The Ride). Room 9

Poynt, poynt.com, is a local search app for BlackBerry and iPhone.
R.P.M. will be previewed at Poynt’s From Dusk ’til Con party with
Mick Foley as a special guest. For more information, please visit 12gaugecomics.com or email info@12gaugecomics.com

12-Gauge Comics was founded by Keven Gardner in 2004 and currently
publishes some of the most successful and critically acclaimed
independent comic books in the marketplace today. 12-Gauge recently
announced the new series R.P.M., written by multiple New York Times #1
Bestselling Author and 4-Time World Heavyweight Champion MICK FOLEY.
The company continues to expand the marketplace with its new iPad app,
which debuted with LUKE MCBAIN, featuring country music mega-star
TRACE ADKINS as the lead character, and the comic adaptation of the
cult-hit film series THE BOONDOCK SAINTS. 12-Gauge members Jason
Pearson, Brian Stelfreeze, Cully Hamner, and Doug Wagner are creating
new and innovative multi-media concepts for the company, including
Pearson’s run-away hit BODY BAGS, and THE RIDE, which debuted as the
top-selling black and white comic of the year in 2004. 12-Gauge
helped develop THE O.C.T. (Occult Crimes Taskforce), an original comic
book concept co-created and starring actress ROSARIO DAWSON. For more
information on the company, please visit 12gaugecomics.com or
email info@12gaugecomics.com.

Boondock Saints, LLC is the official marketing, promotion and
communication arm for all things “Boondock.” The company creates and
produces special events for the growing community of Boondock Saints
fans worldwide, manages media inquiries and requests for personal
appearances and operates three websites, boondocksaints.com,
boondockfans.com and boondockstore.com to provide the public
with a dynamic interactive forum for discussion and user-generated
content along with instant access to updated information about the
films (The Boondock Saints and The Boondock Saints II: All Saints
Day,) related music, merchandise and a variety of other creative
developments in progress.
Posted by Clifford Kiyabu at 8:49 AM

Independent crime writer/director, Kevin Jamison, is working on his next film, Serial: Girl’s Night Out. It is the second chapter in the life and crimes of highway serial killer and sociopath, Trenton Wade Bracks. Trenton is a fictional serial killer, but Jamison has based him on a number of real life killers. The first chapter, Serial: Amoral Uprising, shows Trenton’s traumatic childhood and the killer it made him become. This 58 minute short gives us a step-by-step look at his rise in to mayhem. Even once he becomes this monster Trenton fools everyone. He appears to be charming, polite, and a real catch. He turns in to another animal altogether once he gets the girl out of the safety of the public eye. Trenton let’s his true nature take over in the most brutal sense possible.

Serial is widely inspired by films such as Henry: Portrait of a Serial Killer, Maniac, Kalifornia, and true crime writer, Ann Rule’s, work. Serial: Amoral Uprising premiered at The Horror Society’s Summer Slaughterfest in Chicago, the film has received high praise and attention from publications like HorrorNews.net, HorrorYearbook.com, Dead Pit Radio, HorrorSociety.com, DreadCentral.com, and BloodyDisgusting.com.
Reviews:
HorrorSociety.com
My Review on HorrorYearbook.com
Bonedigger's Review on Horrornews.net
View the Serial: Amoral Uprising trailer here.
Serial: Girl’s Night Out picks up five years following the first film. It continues the trickery and slaying of serial killer, Trenton Wade Bracks. These fictional killer is highly influenced by real life cases of Ted Bundy and Henry Lee Lucas. Girls Night Out tells the horrifying story of two sorority sisters from the University of Memphis who run in to the vicious serial killer himself while out on a seemingly innocent “girls night out”. I will be featured in the film as one of the three main girls along with the talents of Deneen Melody and Colleen Miller as well as Kaylee Williams. Christopher Howell is reprising his role as Trenton Wade Bracks.

Girl’s Night Out is serves as a way to venture forward in to Trenton’s world while Kevin Jamison waits on the budget for a feature Serial film to come through. Jamison’s production company, Black Eye Entertainment, along with co-producer Mitchell Wells of HorrorSociety.com, will use film festivals, magazines, and genre conventions, and online marketing until the film gets distribution. Serial: Girl’s Night Out will be available once post-production wraps later this year.

For more information on Girls Night Out, Amoral Uprising or updates regarding the status of the Serial project please feel free to visit the film’s official website at www.serialthefilm.com.

Posted by Kelsey Zukowski at 2:43 PM