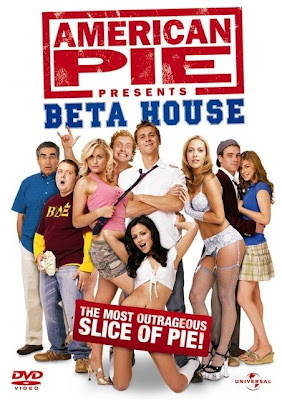 Plot: Erik and Cooze start college and pledge the Beta House fraternity, presided over by none other than Dwight Stifler. But chaos ensues when a fraternity of geeks threatens to stop the debauchery and the Betas have to make a stand for their right to party.

My Thoughts: American Pie, a film that is know today as a mix between a modern-day Animal house and Porky's, in a strange why very much right,

than came along it’s sequel American Pie 2 which manages to outdo what the first one did, but with it’s second sequel American Wedding being noting but a great big disappointment, you’d think they’d stop, but than they turn around and give us a third sequel American Pie Presents: Band Camp which was a slight improvement from the last one but still disappointing to watch, and before we can even say “huh” we get yep that right a fourth sequel American Pie Presents: The Naked Mile which at this point was just downright horrible, an insult to the American Pie name, so it didn’t surprise me when American Pie Presents: Beta Housewas made, I mean after all the filmmakers stopped caring about their loyal fan based after part three was made and only seemed to care about turning another buck while the name was still known, now some of you are wondering why in the hell would I be crazy enough to watch something I already knew was a going to be horrible? Well that answer is simple really, even though I didn’t like The Naked Mile I still felt I owed it to everyone to at least finish the series and review this sad case of a film, and what do I get? An even bigger disappointment than the last film, not to mention the film rips off on almost every classic comedy film from animal house with making Beta House having two leaders, one being a conservative gentlemen and the other being a wild party animal, it even rips off the first American Pie film,

not to mention so many others that would take me all damn day to go into. It’s sad really because it shows that the writers as well as the filmmakers are unable to come up with any original stuff, it’s just the same old material recycled over and over again to a point where you can’t take it any more, and yet again for a film that has none of the original cast they manage to loose more of the cast from the last film, this only says one thing, with or without you we’re making this movie which is sad because it means the makers of these films don’t care about the actors or the series itself, all they care about is pumping out cheep movies with no story and a shit loud of T&A with the American Pie title slapped on it so they can make a quick buck out of it.

Another thing I found to be most disappointing was the fact that the American Pie series has become just like the National Lampoon films, random films with the title American Pie attached 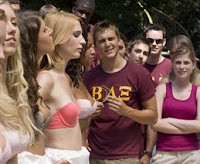 to it, of course they try to keep it somewhat connected to the first films by continuously mentioning it in various forms, and the fact that Eugene Levy is reprising his role as Mr. Levenstein or as most of us who’s been keeping track of the Pie films as “Jim's Dad” in it, oh why I ask is he still in the films? The rest of the orginle cast was long gone two films ago so why is he still here? It just doesn’t make sense, the other connection is the Stifler family, it seems that after the second film Seann William Scott's character “Steve Stifler” became the star of the film in “American Wedding” even though the plot wasn’t focused on him, but when he did not want to return for a fourth film plus the rest of the remaining cast had already moved on in their careers, they decided to bring in Tad Hilgenbrink to play “Matt Stifler” the younger brother to Steve Stifler in Band Camp, and after the film bombed big time what do they do next? Oh they bring in another hole new cast of actors in The Naked Mile, but this time they introduce John White as “Erik Sifler” one of Steve Stifler’s cousins with Steve Talley having a small role in it playing Steve‘s other cousin “Dwight Stifler” which take over as the lead in Beta House with what’s left of the returning cast from The Naked Mile being nothing more but secondary characters, trust me when I say it is greatly disappointing.

The story is about after the events that conspired from The Naked Mile, Erik Stifler (White) and best buddy Mike Coozeman (Siegel) have graduated from High school and on their way to attend collage at University of Michigan with plans to pledge at Beta House fraternity, who the fraternity President just so happens to be none other than Dwight Stifler (Talley) cousin to Erik, and the last truly wild Stifler in the Stifler family tree, who puts them on a wild and adventure of pranks hardcore drinking games and girls girls girls, but while they are pledging to become frat brothers, Dwight is dealing with problems of his own as he must bring his Beta House brothers together so they can face off against a fraternity of Geeks (GEK House) who threatens the very core of Beta House.

As for the acting, well I’m gonna be honest with you here, all the actors tried real hard and give it their all, but their all is not enough, not by a longsome, Steve

Talley I would have to say gave the worst performance out the entire cast of the film, trying to be funny but yet every joke he throws out there only falls flat with a sad yet silly punch line, and his sense of direction on how he should handle his character, and it seems the director must have seen it to or not he would not have flooded the movie with so much half naked girls or in some case fully naked girls in most of the film and especially whenever Steve was on camera, now I’m not saying anything wrong with a little nudity, far from it, I appreciate the female form as much as the next as red blooded male, but there is such a thing as an appropriate amount of nudity and this film goes way passed that amount, so much to a point that it becomes clear that the story is so dull, idiotic and full of holes that they tried to fill it with hot attractive nude women as much as possible, Jake Siegel reprises his role as cooze but his performance was horrible, for one thing he acts out of character from when he was in The Naked Mile, it seems like watching the same person playing two different characters in the same film, the other thing is the fact his characters acts like the best friend to John White’s character “Erik” but yet in you watch The Naked Mile you’ll see that it was Ross Thomas’s characters “Ryan” that was best buds with him, but I guess because he did not return for this sad case of film that they altered Erik and cooze friendship to make them best friends, Christopher McDonald who was only in about ten minutes of the last film as “Mr. Stifler” seems

to only be in this one for about 3 maby 4 minutes at the very most, which is sad because his run time seems to have the only real moments that would have you somewhat laugh, Eugene Levy is a magnificent actor that is always a pleasure to see on film, but it seems his career choices hasn’t been really that wise lately as he is the only actor in the American Pie series to act in all six films and there is no doubt if they make a seventh film he’ll probably be in it too which is sad when you think about it because it just means that the talent from someone as talented as him is wasted in these films, as for the rest of the cast it made up of nameless actors that are so easily forgettable that it just not worth the time to mentioning them.

Final Say: Every time there’s a new American Pie film I buy it with the hopes that this one will finally be the one where they get their act together and make something worth watching, but instead I’m fall for another trap of disappointment, and even though I say this now I most likely will fall for it again if another one comes out, I don’t know you could say I’m always hoping for the good in things and in people to such a point that I’m naïve, I give this movie a 3/10 but only for trying, other than that I would have given it a 2/10. I don’t recommend it to own I don’t recommend it to even rent, however if you still want to see it than watch it at your own risk.

Copyright 2008 TCWreviews.com
All Rights Reserved
Posted by Clifford Kiyabu at 4:55 AM