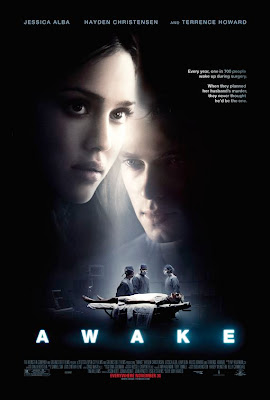 Plot: The story focuses on a man who suffers "anesthetic awareness" and finds himself awake and aware, but paralyzed, during heart surgery. His young wife must wrestle with her own demons as a drama unfolds around them.

My Thoughts: Unintended intra-operative awareness, or better known as Anesthesia awareness, is an

unfortunate thing that occurs to 20,000-40,000 patients out of every 20 million US surgeries every year, what happens in these cases is when the patient is put under Anesthesia but is not given enough the go fully unconscious, and remains partly conscious but unable to communicate and notify their surgeon of their consciousness nor do they appear to be conscious, to the surgeons they appear to be fully asleep, but what they don’t know is the patient is fully awake and in a paralysis state unable to say or do anything but can hear and feel everything going on, it’s a scary thought, going under the knife feeling every bit of it and not being able to tell anyone, such a thing can very well traumatize a person for life. Well writer and director Joby Harold brings us a delightfully chilling story of what it is like to be trapped in your own body with no one to hear you scream, no one to see your pain, and no one to help you, the thought of it alone is enough to make your skin crawl, and it certainly did for me and it remained stuck in my head for days on in after watching it. Now I must admit I had incredibly low expectations for it because of who was starring in it, yes I’m talking about Hayden Christensen and Jessica Alba who I cannot stress enough how much I think they both suck when it comes to acting, but I’ll get back to that later in the review, right now let me say that the I liked how the main is betrayed by the very people he trusted (You‘ll know what I mean after watching it) because it’s a statement that clearly says trust no one, not even the ones you hold so dearly to you especially if you’re a filthy rich tycoon, also the suspense is fantastic, keeping you in the dark of both the main character’s fate and that of the outcome of the story right to the very end.

way to predictable and it can be a bit of a annoyances when you watch film after film with nothing but predictable plots and crappy endings, but this, this was a surprise for me, I mean it really caught a hold of me and had me glued to it’s bone chilling story right to the very end which will be an even bigger surprise because the film is filled with twists and turns that will have you constantly guessing how will it all end, now that’s not to say the movie is flawless, in fact it has a great deal of flaws and plot holes throughout the film (what film doesn‘t these days) it even has a few unexplained questions but aside from it all I still loved it, one of the things I felt displeased with was the parts in the film where Hayden Christensen did a narration of himself in his mind while the surgery, his acting has always bugged me, and I felt that his dull voice in this particular part in the film was a little dry and had me waiting for that scene to end, but aside from his horrible narration the scene is quite intense, I mean it really looks like they are cutting into him, and for a second there I could have sworn I was watching an actual surgery, so I must give kudos to Barney Burman the makeup artist behind the prosthetics, and of course the cinematography was fantastic which is something that always plays a big part in my movie viewing, I also must say that this film isn’t for everyone as the film has a bit of spiritual take on (you‘ll understand what I mean after watching it) his situation but if you can tolerate it than you shouldn’t have a problem with it.

The story is about tycoon millionaire, Clay Beresford (Christensen) a young man who lives by his mother, Lilith (Olin) rules and aspires to be if not just like, but better than his father was at

business, but the only thing that is always slowing him down is his heart defect which requires him to get a heart transplant if he wants to live, so he ask his longtime best friend Jack Harper (Howard) to do the surgery even though it’s against his mothers wishes, so knowing the odds and risks in such a surgery as this that he might die during the operation he decides to put if house in check by marrying his girlfriend Sam (Alba) who he has fallen deeply in love with, soon after marrying her he goes into surgery and put deeply under Anesthesia but soon after something terrifying happens, Clay realize that he can still he the doctors talk, more worst, he can still feel them preparing him to be opened, but the most horrifying thing he hears the very doctors he trusted are making plans to have him deliberately die on the operation table, now the worst thing he could ever imagine is going to happen to him and there is nothing he can do to stop it.

As for the acting, Hayden Christensen is an actor I’ve always found to be a bit of an annoyance, I 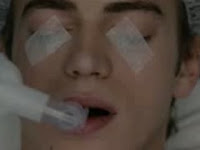 thought his acting in Star Wars: Episode II - Attack of the Clones was so bad I thought about pulling my eyes out with an olive fork, than when I saw him in Star Wars: Episode III - Revenge of the Sith it was a slight improvement but that olive fork keep hunting me in the back of my mind, and than when I saw him act in Jumper I thought “wow, this is a big improvement for him“ because I only thought about that god damn olive fork twice in the hole film [Laughs] I know what you’re probably thinking, what hell is with this damn olive fork right? Well it’s how I express my hatred for things I see. but, I must say with Awake I was really impressed with his acting because it was nothing near to what I had seen in the past, the only thing I didn‘t like is that damn narration he does here and there in the films, perhaps there still hope for him after all. Jessica Alba, another name I think sucks when it comes to acting, now let me tell you I have seen a lot of her films and I mean a LOT! But only two things I’ve seen her in have been remotely good and that was Sin City which I can’t tell you how much I talk about my love for that film, and the TV show Dark Angel which was a fantastic show I might add, it’s just sad it went off the air, but other than that nothing I had seen her in could be counted as good, it would seem that she is only as she is seen, but once you get to know her up close you get something you wish you hadn’t, but aside from her previous work, I was impressed with her work in this because it’s a role I’ve never seen her take before and she did a somewhat good job this time so I’ll give her this one as plus on her career. Terrence Howard was fantastic, I have grown to like pretty much everything he’s acted in, Crash, Hustle & Flow, Four Brothers, The Hunting Party, The Brave One just to name a few are some of the films I’ve seen him in and my god he sure

knows how to get into character and make any role work to his benefit which is why I liked his acting in this because he didn’t play the character, he became the character which is something to few actors know how to do. Lena Olin was magnificent I remember her from her days on Alias and it was fantastic to see her back working again. Christopher McDonald a great actor and it was great to see him appear in a nice little role in this, Fisher Stevens was also great, god the last time I remember seeing him in something was and this is gonna sound embarrassing but I remember seeing him last in Super Mario Brothers I know I know he’s acted in a tone of films since then but none of them he stood out to me, but this one I remembered his role so that’s got to count as something right?

Final Say: I really enjoyed this film and it has given me hope again for both Hayden Christensen and Jessica Alba, lets hope that they do live up to it, well like I’ve said it’s not a flawless film but it is still worth a watch. I highly recommend.

Copyright 2008 TCWreviews.com
All Rights Reserved
Posted by Clifford Kiyabu at 4:17 AM