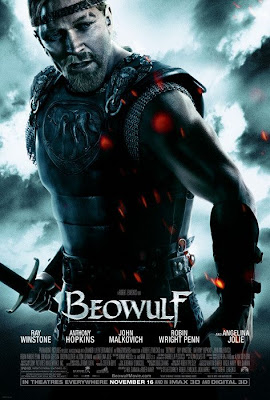 Plot: The warrior Beowulf must fight and defeat the monster Grendel who is terrorizing towns, and later, Grendel's mother, who begins killing out of revenge.

My Thoughts: There is an old poem called “Beowulf” which tells of a story about a hero named Beowulf a hero

of the Geats, who battles Grendel a monster that is descended of a greater monster (His mother) of the time before man. After killing this monster by ripping it’s arm off and bring back it’s head and becomes a king, but later he an unknown dragon which leaves him badly wounded after the battle and dies, now with such an epic poem such as this, there is no way in hell can it be made into a live action movie, but than I thought of the Lord of the Rings film trilogy and 300 how it came out in the end, well I can tell you it is no LOTR, nor is it in any way nearly as great as 300, which is one of only a few films I’ve ever given a 10/10 in my life, however, saying that doesn’t mean it is a bad movie ether, I liked the idea they where able to make the film in a mostly CGI environment because by doing so they manage to capture the essence of the story within the poem and also manages to even add a little twist of their own to the story which cam out quite nicely, don’t think they could have done so if the had made this film completely on location, also seeing that all of the actors was had a new CGI technology added to them was both a blessing and a cures, a blessing because now it means actors and actresses all around in the near future wont have to put their bodies through such physical torture like so many of them do today, it will also be a cures because it will eventually be the end of traditional style acting, making any actor or actress look the way or act the way you want them to without any real work on their part, meaning this new technology just made the way for a hole lot of talentless actors into the business, which is going to be a sad day indeed.

Now unlike the many other Beowulf films before it this one has a new twist to it, instead of

Grendel being just an oversized violent monster that rampages through the lands killing anyone in his path we are given this misshapen abomination, a creature you can’t help but feel sympathy for, after all it’s not his fault he is the way he is, he just is, and also unlike other previous attempts at making this story happened our hero Beowulf as this boy scout hero, but more rather like a rough cut hero who does what he does for the glory of it all, and in a much different sense when he does defeat Grendel it sets into motion a chain reaction of events that leads to his rise to power and ultimately his undoing, the message that this film shots across to it’s viewers is about choices and how choosing unwisely will your own undoing later in life, however there was one bit of this movie I found to be a little unsatisfying, and that is the film’s timeline, after our young Beowulf defeats Grendel, and he makes his deal with Grendel's Mother, the film suddenly takes a massive leap in years later with no explanation which I felt was a little out of place giving you the impression that a part of the story is missing somehow, and that before the film is over we are gonna get an explanation on this lost of story , but we never do which makes me feel that the story was rushed to the point way to fast, however the film was still impressive none the less and with a most satisfying ending that is greatly grey and bitter sweet but it still manages to do it’s job as this is based of a poem and it’s ending is quite poetic, just know that there wont be a Beowulf 2.

horror to the party killing most of everyone there, now the king orders the best warriors of his land to put an end to Grendel but none of which is victorious, all hope is lost until Beowulf (Winstone) one of the most courageous heroes of the known world arrives to the kingdom with his bad of heroes, up to the task to bring an end to Grendel and his mother, has he fights and defeats the mighty Grendel and becomes known as the hero who saved a kingdom, Grendel’s mother (Jolie) however seeks revenge and replacement of the lost of her son, and when Beowulf goes to finish off Grendel’s mother who falls into a web of deadly seduction which will ultimately be his undoing.

As for the acting I can tell you now, it’s pretty much all CGI so it’s not like the actors had to do

much, but I will however saw their performance was not left unnoticed, Ray Winstone was fantastic his voice matched dead on for the character as well did his likeness which was also great, Anthony Hopkins was fantastic and his talent was not wasted in this as he did a magnificent job as King Hrothgar, Crispin Glover was probably the most impressive one out of em all, and after seeing him play Grendel I can honestly say I can’t imagine anyone else playing that part, Angelina Jolie was wonderful, she made Grendel’s mother beautiful as well terrifying, sinister with a hint seduction, Robin Wright Penn was great she gave her character great deep which aaI liked a lot, it showed how unhappy she was being King Hrothgar’s queen and even more unhappy when she became King Beowulf’s queen because he had become the man she wasn’t hoping he become, John Malkovich magnificent he did his character a great deal of justice showing that he was greatly jealous and envious of Beowulf, and Brendan Gleeson did a outstanding good job playing as Beowulf’s loyal second in command Wiglaf who was by his side right to the very end. any other actor that I didn’t mention her doesn’t mean they didn’t do great it just means I forgot. But they all did great performances that was most satisfying indeed.

Final Say: Beowulf was very enjoyable although I was somewhat a little disappointed towards the middle point in the film I still was satisfied with it’s ending which was more than enough to be given an 7/10 from me. I recommend it.