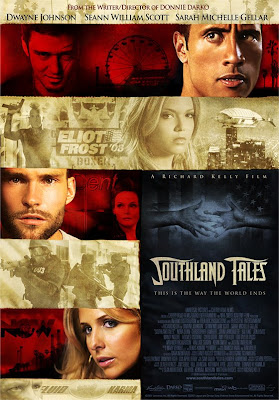 Plot: Los Angeles, 2008: The city stands on the brink of social, economic and environmental disaster. Southland Tales is an epic story set over the course of threedays that culminate in a massive 4th of July celebration. A large ensemble cast of characters includes Boxer Santaros (Dwayne Johnson), an action star stricken with amnesia, Krysta Now (Sarah Michelle Gellar), an adult film star developing her own reality television project, and Roland Taverner (Seann William Scott), a Hermosa Beach police officer who holds the key to a vast conspiracy.

My Thoughts: “This is the way the world ends-Not with a whimper, but with a bang.” With these words said so begins the beginning of the end. Well that is of course in the much highly

anticipated movie Southland Tales which is the follow up to director Richard Kelly’s cult classic film Donnie Darko, which is a film I cannot stress enough how much I love watching, more so the director’s cut which alone I’ve seen a good 15 time already, so when I first heard about Southland Tales being made back in 2005 the plot summery on it sounded quite promising, but what caught my eyes was 1. Who was directing it, see Richard Kelly is a brilliant director who often has his viewers taken on a journey that is both spiritually and imaginative, the part I find most intriguing about his work is he often leaves a lot of the story up to the viewers imagination letting them come up with their own conclusion, this is something most directors will not do solely because it is a great risk that will ether make a film rise to greatness or fall in shambles, well as I’ve said with his films like Donnie Darko he took a great risk and succeeded with getting his point across to the viewers. And the second reason was. Because this was the follow up film to Donnie Darko which you probably know by now is one of my all time favorite films, so with that said my expectations went from zero to a hounded faster than you could say holy cow. Now if you haven’t seen his previous film yet than I highly sedges you do because it’s a worth watching film. But enough about Donnie Darko, Southland Tales is what I’m reviewing here, so with southland it storyline tales place during Julie 2008 in a apocalyptic future setting now you’re probably wondering how the hell can it be set with a post-apocalyptic background with near future settings during 2008? Well for one this the movie was originally supposed to had come out in 2006 but because of the high negative feedback from film critics at the 2006 Cannes Film Festival resulted in the film having no without a distributor, so director Richard Kelly went back and re-edited the film, cutting out 20-25 minutes worth of footage and after the re-editing done to it he got distributors to release his film in late 2007 with a limited release in theaters, the problem I learned that most critics had with the film was its storyline is hard to follow and with it being so close to the modern-day date, it sounded ridiculous, but the thing most of them don’t understand is Southland takes place in an alternate universe where certain chain of horrific evince take place that causes our would to go into a WWIII,

bombs into the country through Mexico and us them to perform the greatest terrorist attack in history, one that would be so catastrophic that it would put 9/10 to shame, now since such an attack would happened during 2006 that would mean the majority of the people in America was still for the war in Iraq and something this big would only have them support it even more, this is where the story take off, the united states of America locked down from the rest of the world, with our government re-enacting the draft and sending millions of solders across the middle east and in North Korea looking for blood and payback on anyone who may have had a hand in it. Meanwhile anarchy is spreading like a wild fire throughout the country, but something else is also emerging that no one could have thought of. Now I must notify you that if you decide to watch you must have a tolerance for religion and not take the movie so literally because this movie is pretty much an ensemble to the book of revelations being foretold by one of the main characters, Private Pilot Abilene (Timberlake) as he tell of the Apocalypse or if you prefer the end of days, so don’t take it too seriously because some of the stuff in the film will not make a whole lot of scenes, it is to be taken as a references actually rather than literally. So now the question remains, is it better than Donnie Darko or not? The answer is no, it is not even close, not even by a long shot, however it is defiantly not a bad film at all, it just has a few problems that if corrected could have been a great film, the first problem was during the film it had its moments where it’s so cheesy and mediocre that its embarrassing to look at, but with the same amount of bad moments in this film it also has some good ones so it evens out a little, another problem is the run time. I know the film had been cut down by 20-25 minutes worth of footage but it still feels like the it over stayed it’s welcome and if it had been cut down just a little bit more perhaps it could have been a great film.

write a screen play about the end of days, but little that they know their screen play plays out much like the events that are about to take place and Boxer Santaros begins to find out who he really is and what his connection is to a state senator running for president, meanwhile a terrorist group built of people who hate the current government called the Neo Marxist Group convinces a a man to pose as his twin brother who is a police officer named Roland Taverner (Scott) and pretend to be a racists cop for them to help spread anarchy by making like he killed a recently married interracial couple, but what doesn’t know is the real officer Taverner might not entirely be his brother but greatly connected to him still, and as all the players to this story go their ways in this story they don’t know that they are greatly connected to each other and will set into motion the end of days.

As for the acting, Dwayne Johnson is ok, I’m not saying he the best thing to hit movie screens,

but taken that he’s done a great deal of acting in his past career of wrestling it sure help him in acting in this and other films, as for Seann William Scott, well he’s great but he suffer from a problem on screen I like to call the Steve Stifler syndrome, see ever since watching the American Pie films I’m having a problem seeing him play another role without saying “Hey that’s Stifler, man!“ and the thing is I’m not the only person who has stereotyped him has one particular character, I found out others have as well hence the Steve Stifler syndrome, perhaps if he was to do something that would get him out of this stereotype like starring in a romance or something he could actually become a great actor, I found Mandy Moore to be somewhat annoying in this movie as well as her Mandy Moore character which thought to be too superficial and sometimes (forgive me for saying this) a bitch, as for Justin Timberlake he’s not in the movie much but he gives a narration of the book of revelations in the film from time to time tell the story of the movie you are watching as it goes, which I found to be quite pleasing, also the music number in the film which he lip sings the song “All These Things That I’ve Done” by The Killers was truly a magical moment indeed and was fun seeing because the song with the number alone tells its own story, Miranda Richardson gave a great performance as Nana Mae Frost the head of the new homeland security who is as sinister and heartless as the very evildoers the supposedly fight, it was also nice to see the following actors and actresses on screen, Nora Dunn, John Larroquette, Bai Ling, Jon Lovitz, Curtis Armstrong, Beth Grant, Christopher Lambert, Holmes Osborne, Cheri Oteri, Wallace Shawn, Zelda Rubinstein, Kevin Smith, I could go on but I wouldn’t want to bore you anymore [Laughs] but all of which that’s I have just named here to great jobs in their performances.

Final Say: I really liked this movie a lot and had fun watching it, although many may not agree with me on this film I stand by what I said and will say it’s a great film that worth watching, may not be for everyone though, but still I highly recommend.

Copyright 2008 TCWreviews.com
All Rights Reserved
Posted by Clifford Kiyabu at 4:36 AM