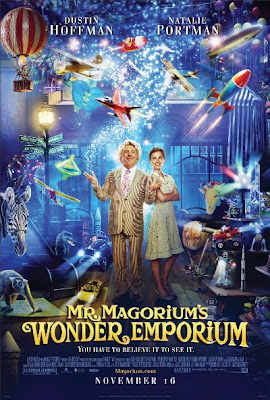 Plot: Mr. Magorium's Wonder Emporium is the strangest, most fantastic, most wonderful toy store in the world. In fact, it's a magic toy store and everything in it comes to life--including the store itself. The emporium asks only one thing of its customers--you must believe it to see it.

The story is about: Mr. Edward Magorium (Hoffman) a man who’s been selling toys for over 200 years, he himself clams to be somewhere around 243 and after a fun filed life running his store he feels that it’s time to past the store down to his apprentice, Molly Mahoney (Portman) so that he can humbly die knowing his store is in good hands but little does Mr. Magorium know, Molly is not interested in owning the store and is thinking about moving on, meanwhile because of Mr. Magorium plans of leaving and Molly not wanting to run the store anymore, the life of the store starts to take a dark and ominous change that begins to take over the once remarkable Emporium.

My Thoughts: As children we see the world much differently than as adults, we see it as a world of magic and endless possibilities, a world of wonders and adventures to be discovered, as adults we see the world as a harsh place with hard problems and struggles to be fought daily, we all wish we could go back to or time of childhood, a care free time when it was all play and no work. Well Mr. Magorium's Wonder Emporium shows us that just because we’re adults doesn’t mean we have to stop having fun, it’s message is as clear as daylight, saying have fun, go out and play and don’t take life so seriously because after all you only live once. I was really surprised with this one, I thought it was going to be a cheesy and idiotic film, was it cheesy? YES! Was it idiotic? NO! it was a very uplifting, a feel-good film that will put smiles on the faces of anyone who dears to watch it, it is without a doubt this will one day become a timeless classic to be enjoyed by generations to come, the thing I found to be most interesting was unlike most kid flicks this one has a great deal of maturity that will touch the heart and minds of young teens letting them know just because they get older doesn’t mean they have to change the person they are inside, while still remaining fully entertaining for the little ones, it’s certainly something the hole family of all ages will enjoy which is something you don’t see in everyday films, it also doesn’t try to be hip or trendy, it sticks to it’s on level and even revives some old styles, which of course something I greatly like because in most films now days (especially the ones for kids) filmmakers try to make the film as “Hip” as possible with the younger generation, or try to make a fashion statement to the teens or pre-teens generation, which I tend to find very annoying because films that do that are only trying to make a buck instead of being a work of art, but with Mr. Magorium's Wonder Emporium they stick to their own style and stands proud by it, I like this because it showed that they are original and not some other knockoff film out there to fill in the timeslot for the film studios.

raving of it’s wonderful effects that you just can‘t go wrong with, and the cinematography was fantastic, the colors shine through and through in this which I found to be quite amazing. The only problem I had with the film was a few things, the first one was the beginning of the film, see they start it off with very little back story (if any at all) of Dustin Hoffman’s character “Mr. Magorium” and he isn’t shown in the film until a good five minutes maybe more into the film but that can easily be forgiven as they have good reason for it by introducing Natalie Portman’s character “Molly” first but the thing is When they do finally Mr. Magorium they do so as if we already know him, this was a little disappointing because if I’m going into a film that I no nothing about I’d at least like to know a little of the main character, not just supposed to be expected to know em already, also their was the little part involving the characters of the film, each and every character in a movie should be there for a reason, if not for a part of the plot than at least there as support, but for some reason actress Rebecca Northan who plays actor Zach Mills on screen mother “Ellie” had nothing to contribute to the plot, not even as a side characters to the plot, it just seemed like she was there to be, well there, which I found to be disappointing because her characters had a run time that was more than some characters who actually did contribute something to the plot, also Ted Ludzik’s character “Bellini, the Bookbuilder” had nothing to contribute other than the fact that he’s there, which is odd since it’s noted down that the story was being told throw his point of view, but the most disappointment was the ending, noting wrong with how it ended but how it got there, the ending was magical, something to see, but how it got there was the problem, see in a film’s run it goes through the course from point A to Point B, point A representing the beginning and point B the ending, you need a story that leads from one point to the other, but it felt like after they hit the middle point in the film they ran out of story and couldn’t get to the ending so they just said hey lets end it, and just like that they ended it, with nothing more to add.
As for the acting, Dustin Hoffman is by far one of the best actors in the industry a

nd is on my top 20 all time favorite list of actors/actresses and what he does in this is nothing short of magical, and that is truly remarkable, like all other films he acted in he really puts himself into the role and gives it 110% of his time. Natalie Portman was wonderfully breathtaking, like all films she’s acted in so far she has yet to disappoint me in her acting skills, in fact she has only shown that she gets better with every film she does, Jason Bateman is an actor I don’t normally like, hell I’ve even said on many occasions his acting can be rather dry and his comedy can be a little too dull, you most know by now that I am not a fan of Arrested Development, god that show was (in my opinion) the most horrible comedy I ever saw, and his lousy performance in The Break-Up didn’t help, not to mation his somewhat laughable performance (Not in a good way) in Fast Track was so bad it made want to look for yep you guessed it, an olive fork, hell his one of the main reasons why I hated Smokin' Aces, however, aside from all the negativity I said about the man, I will however say that quite recently he has shown some promise, acting in such films like The Kingdom and Juno, his acting is no way nearly as good in this as it is in the two other films but I will say it is much better than what he normally shows on screen, who knows maybe I’ll grow to like his acting if he keeps it up. Zach Mills was great, I must say normally I don’t think of anything with child actors because they new to it and most of them bad most of the time and the ones that are good later become troubled. But I must saw that he was fairly good, and I respect that.

Final Say: I really had fun watching this, and would love taking another wake at it one day, my only problem was and still be the ending which I said already cuts a little short and feels like it was rushed, oh well maybe I’ll see it differently when I see it again one day. I recommend.