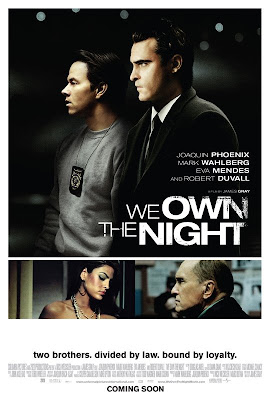 Plot: A New York nightclub manager tries to save his brother and father from Russian mafia hit men.

My Thoughts: What is most important in life, love, friends, business, or family? Between two brother, one a

decorated police officer, and the other a nightclub manager mixed in a web of drugs and the mob, but beyond their differences lies loyalty, and through loyalty they will save each other from their own problems. Director James Gray is a man who doesn’t direct just any screenplay, no he only directs want he wrote and seeing as he has only directed two other films in the last 13 years (Little Odessa, The Yards) and seeing as his two other movies are fairly decent films with a good storyline and good cast with great acting I thought you know, this just might be good, well what I got was nothing short of fantastic, it is as thrilling as it is sexy, now I’ll admit I was not 100% interested, as you read earlier I thought James Gray films where good not fantastic, so I went into this without high expectation nor low ether, you could say it was somewhat moderate, but what We Own the Night did was exceed my expectations and had me droned into it’s retro ecstasy that is the 80’s with it’s fine cocktail mix of cop-drama and sibling-rivalry, but the rivalry is ultimately subdued by the most important thing among brothers, and

that is their loyalty to family and what steps will they be willing to take foe family, the story it’s self concentrates mainly on Joaquin Phoenix’s character, Bobby, who lives on the wrong side of the law and is mixed with drug dealers and the local syndicate and mages a hot night club but he must deal with the fact he comes from a family with a long line of cops, and while everyone in his family is cracking down on crime he’s living it up as part of the problem, while his brother is so dedicated to being an honest police officer that they rarely ever talk to each other without fists swinging at each other, there sure is this feeling of high tension whenever the two is together, but of course no matter how much they despise each other family and loyalty comes first.

Now the thing that I liked about this scenario between the brothers in the overall plot was it highly resembles a lot of how real life siblings are to each other, there is always this sense of

rebellion and rivalry that is between most brothers , I know this personally because I having an older brother, and me and him always disagree with each other (mostly politics) and on occasion we may knock fists, but no matter how much we might be mad at each other at the time, you f##k with one of use, and you’ll get the both of use coming down hard on your ass quicker than you can say holy shit, [Laughs] also I liked how the story itself plays out showing that Bobby is stuck between helping his brother, Joseph (Mark Wahlberg) and his father, Albert (Robert Duvall) while trying to keep his own family and his back history of cops in the family a secret to his friends and associates because it‘s bad for business for a night club if it‘s manger is related to cops. Also I like how the two of them are very different but at the same time very much the same, for example; Bobby is laid back kind of guy who mages a hot New York night club at night with his best friends and girlfriend working alongside him, and pretty much hang around the wrong crowed, while his brother, Joseph is a hard working honest cop that doesn’t take shit for no one and wont stop working a case until it’s

over. But the thing they share that’s the same is that they are both loyal to family and willing to go the distance to do whatever it takes to right the wrong, epically Bobby because you see that after certain evince take place (Not saying) he takes responsibility and does something about it, also enjoyed hearing the lovely 80’s background music like Heart of glass by Blondie, which brought back memories for me, now before you say a word I know I was born mid to late 80’s (1986) there for I grew up throughout the 90’s, but I didn’t care for much crap the 90’s gave, I also liked the cinematography which gave this dark and gritty like setting that came out quite nicely and perfect for the mood of the film, also the action was great, it’s not much but it is very satisfying capturing the viewer full attention with plus pounding scenes.

The story is about Bobby Green, a night club manager for one the hottest club in New York, who is the it guy for knowing who’s who among the night life crowd, living the fast track life mixed in with the wrong people, but what no one knows is he is the brother of Captain. Joseph Grusinsky, one of New Yorks most dedicated police officers, and the son of Deputy Chief Albert Grusinsky the head of the New York drug division, and when they come to him for help become an inside man for them which he refuses but after his brother suffers a horrible accident by the Russian mafia he is torn by keeping his loyalty to his family or his friends, while trying to hang on to the woman he loves, he soon realizes that he is stuck in a situation that puts everyone he cares for in the line or danger unless he does what’s right to fix it all.

As for the acting, Joaquin Phoenix was mind blowing, I first got a taste of his talented acting

skills back in 2000 with Gladiator it was here where I became a loyal fan, and so far he has yet to disappoint me, Mark Wahlberg another great actor with fine talent that is hard to find among now days actors, what I talk about is the great risk he tends to take with his acting jobs, one in particular which is also one of my all time favorite films by his is none other than 1997’s hit Boogie Nights which till to date is (in my opinion) his best work, now like all actors, in his career he has had a bit of bad apples fall from his tree, but with every bad film he quickly makes up for it in the next film and his performance in We Own The Night was fantastic and so far in the last few years he yet to make a single bad film, one could say he‘s on a winning streak, Robert Duvall was magnificent, I‘ve been a fan of his since I first watched the The Godfather on VHS as a child, he’s an actor that still has the old Hollywood magic that truly makes him shine on screen no matter what film or what role he‘s in, and of course Eva Mendes, an actress who‘s acting talent is as stunning as her beauty, she embodies the very meaning of the word sexy, and who acting goes above and beyond the normal standards and her performance in this was truly unforgettable.

Final Say: I had a blast watching We Own The Night, and what I found most intriguing was during my research I found out that the saying We Own The Night was apparently a real New York police slogan in the 80’s, I reall enjoyed watching this and I highly recommend it.
Copyright 2008 TCWreviews.com
All Rights Reserved
Posted by Clifford Kiyabu at 5:59 PM