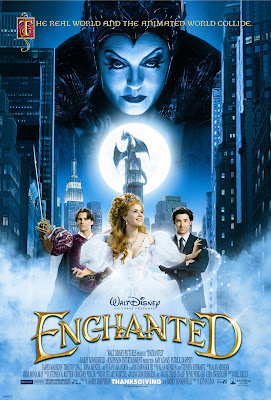 Review By: Kelsey Zukowski
Starring: Amy Adams, James Marsden, Susan Sarandon, Patrick Dempsey, Rachel Covey, Timothy Spall, Idena Menzel
Directed By: Kevin Lima
Written By: Bill Kelly
Released: 2007
Grade: B+
Enchanted is a wonderful movie that takes all of the Disney fairy tales to another level. The pattern within this category seem to repeat each other, so Enchanted challenges it. It does this by starting out in animation, with a princess and a prince, destined to be with each other, and looking for their true love. Yet this tale is taken out of their comfort zone and in to the real world; our world. This is where all of the common clichés are used in a satirical way while still being light hearted and charming.

Giselle (Adams) is very sweet and homely girl. She resembles a Cinderella type of character who spends her day sowing and making her own clothes with the help of her best friends, the woodland creatures around her house. What she really dreams of though is finding her one true love. She wants to be swept off of her feet by a handsome prince, get married to him, and live happily ever after. It just so happens that Prince Edward (Marsden) wants something very similar. The time is fast approaching that he will take the thrown since there is no king in power. As soon as he finds a bride to become his Queen they will rule the land. Edward really just wants to fall in love with a sweet and beautiful girl who he can spend the rest of his life with. His mother, Queen Narissa (Sarandon), will not have this. She loves her power and she wants her reign to last forever. So the only way for this to happen is if Edward doesn’t get married. Narissa does everything she can to prevent him from doing so. Edward and Giselle bump in to each other, and to them it was just like love at first sight. At the wedding though, Narissa pushes Giselle down a magical water stream that transports her to modern day New York City.
Giselle is completely lost, she has no idea what this strange new world around her is or how she

can get back to her prince. Of course people in the city aren’t exactly friendly. When she nearly falls off of a billboard, Robert (Dempsey) and his daughter, Morgan (Covey) come to her rescue. Morgan is stunned to see a real life princess. Robert is very reluctant to let her stay at their house, but he agrees to help her out with a place to stay just for now. When Prince Edward finds out that his bride is missing he goes on a search for her and heads in to New York City too. Queen Narissa finds out about this, she sends her helper, Nathaniel (Spall) to poison Giselle. He has trouble doing this and Narissa comes there herself to kill Giselle so she can stay in power.
The sub-plot of the intermingling love stories is very strong. It shows that love at first sight might not be what it seems to be. Perhaps it is more based on expectations, hopes, and what seems like it should be natural. Robert questions Giselle on how she can be so sure that Edward is her true love after just spending a day with him. Robert isn’t too open or welcoming to Giselle at first. Yet, over time he gets to know her better and really appreciates her. With his girlfriend, Nancy, he always had to work much harder and the idea of commitment towards her doesn’t come to him as easily. At the end, there is suggestion that maybe the two couples would be better with the opposite partners. This really shows that love is unpredictable and it takes time to really get to know someone. Also it resembles that real life fairy tales are attainable. However, they can not be created over night. So in reality, real life fairy tales just mean finding happiness with another person.

Amy Adams resembles the title of the film completely as she is utterly enchanting in her performance as Giselle. She exerts such warmth and radiates loveable energy that really helps set the tone for the movie. It is interesting seeing someone like this, since it isn’t everyday that we see such an animated person. James Marsden nearly matched this, which is not something easy to do. He mastered the charismatic role as Corny Collins in Hairspray and he brought it to an even higher level here giving a very convincing performance as the dazzling and charming Prince Edward. Susan Sarandon was very convincing as the evil queen, even her voice seemed to

represent her mentality perfectly. Patrick Dempsey in the end worked well off of Amy Adams although they had very different personas. Rachel Covey as Morgan brought many of the elements together. She had the fantasy mentality and having a real life princess was like a dream come true. She also helped bring her father and Giselle together, which ended up being the basis of the moral.

Enchanted is a much smarter film than the typical fairy tale. It makes comparisons between fantasy and reality. The script is very well written and the characters are developed very well. Nearly everyone is very likeable, which makes us care for them. The musical numbers are wonderful. Even to those who aren’t a fan of musicals, Enchanted speaks to this. Many of the numbers are done in a comical way that spark jokes of what it would be like if someone would really just burst out in song randomly. A lot of the comedy in the film comes from what reality would mean to fantasy situations. Enchanted is very smart, but still prioritizes having fun with the film very high. The movie still has a similar feel to some of the Disney films of the past. It is loveable, light hearted and a creatively energized film that has something for everyone.
Posted by Kelsey Zukowski at 5:50 PM