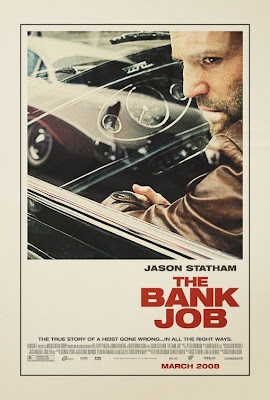 The Bank Job has a by-the-book title, but people will be surprised by how smart, inventive and gritty this film actually is. Just look at the poster. There aren’t any overwhelmingly long gun battles between the cops and robbers but rather a basket full of events overflowing the brim of this particular bank job. At the helm is veteran director, Roger Donaldson (Cocktails and The Recruit), and he knows thrills are at their best without any over-the-top action scenes. Amidst all the hoopla of recent heist films, most notably the Ocean franchise, there is something true about The Bank Job. It doesn’t veer off into a fantasy world like Ocean's 13 did. The bank robbery that occurs is so down-to-earth that we can imagine it happening at our local bank. (The film, by the way, is based on a true story - a story that was buried for 30 years due to a government gag order.) It's set in 1971 London and that’s exactly how The Bank Job plays out; almost as if it’s a close cousin to the great heist films of that decade such as The Getaway and Dillinger.
Thief-turned-hero is Terry Leather (Jason Statham), a ordinary man with a wife and two children who finds himself knee-deep in debt to some loan sharks. He’s is the star of the movie. Statham is slowly morphing into a badass Hollywood star along the lines of a young Bruce Willis or maybe even Mel Gibson. Here, Statham abandons what he's done best so far - those fast-paced action and adrenaline films - and settles down to find himself acting quite well. You'll also find some quality one-liners in this film that your stars from the 70s might have said, Clint Eastwood, for example, or Steve McQueen.

When Terry gets a proposition by a former convict/past lover of his, the beautiful Martine Love (Saffron Burrows), to rob a bank’s safety deposit boxes because the alarms will be shut down until they get new ones, he sees it as a blessing and a way out of debt. He hires a fifth-rate team (of very fine actors!) in no time at all. She needs something specific out of one of the boxes but doesn’t tell anyone that, as she’s helping some high-up officers who once helped her out. They're after some valuable information that is stored in one of the boxes - photos that can implicate a member of the Royal family in a sex scandal.
But the goal of the film isn’t to show how Terry and his team succeed in robbing the bank. Instead Donaldson concentrates on unraveling the series of events that transpire after the robbery occurs, which brings the lowest scum in London out of hiding: an extortionist radical, a porn king and crooked cops. It’s a robbery precipitated by severe circumstances and opens doors to the private lives of the highest and most prestigious people in all of London. Corruption is inevitable here. I’m going to quit telling you about this movie because anymore will spoil it for you. Go see it.
Posted by David Dominic DiMichele at 6:13 AM