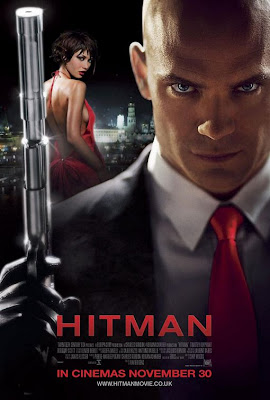 Plot: A Hitman known only as Agent 47 (Olyphant) is ensnared in a political conspiracy, which finds him pursued by both Interpol and the Russian military as he treks across Eastern Europe. Hired by a group known as "The Agency" to kill targets for cash.

My Thoughts: I have been a long time Hitman gamer, so you can imagine how much anticipation I had building up

when word got to me that a Hitman movie was in the works last year. But as much as I wanted to see it I was also worried, because for starters there really haven't been a successful video game movie yet, just a lot of disappointments left and right, now don't get me wrong some of the movies like the Resident Evil films or the Silent Hill movie have all been really good, it's just they don't capture the games essence. And in a way that's a downer because the reason they are made into movies in the first place is to please the gamers who bought the game and supported all its fallowing sequels, only to have the film company to do a 360 on them and do the complete opposite. Well did Hitman live up to its name or did it do a 360 on us, bend us over a table and have its way with our ass? The answer is it lived up to its name and more. Now I'm not saying it's the best movie ever made, or that it was exactly like the game, but it at lease didn't forget us the gamers who played it from the beginning when it was nothing to the world but a cult classic game and watch it grow over the years into the mainstream icon it is today.

The movie doesn't play out as an origin flick, but it does shows brief glimpses here and there in

the beginning in the opening credits. So for most people who didn't play the game or doesn't know anything about the back story to our favorite gun for hire, I'd say turn away now and don't comeback until you've played a little Hitman. As for the rest of you, you will be pleased as I did, for one I didn't think Timothy Olyphant was a good choice for Agent 47 in the beginning when filming just started, I thought he would be horrible even though I liked his performance in Live Free or Die Hard. And even while I was sitting in my chair before the movie started I keep thinking, man he is going to kill this movie. But damn was I wrong, and I'm damn glad I was too! He not only mange to maintain the image of Agent 47 in a respectful manner, but he also gave the character an in-depth look. Because the Agent 47 we all know and trust (to get the job done) is just a killer that does his job and gets out. But what about the man behind the assassin? In the movie we see Agent 47 (Olyphant) not just as an assassin for hire but as a man who is trained by the Agency to beat impossible odd. Except for one thing, living without orders. All his life he took orders from others to kill without question. But after his latest mission goes south, the Agency leaves him hanging out in the cold. And now he is being pursued by Interpol, the Russian military, and even his own Agency. And the only one he can trust is Nika Boronina (Kurylenko) a Russian prostitute who his Agency clams witness him in his last mission, and is ordered to kill her to which he agrees to do. But when it's time he can't find it in him to do it, because he knows deep down inside something isn't right. And instead helps her while trying to figure out who's behind this mess.

the movie is about The "Hitman" is a genetically-engineered, elite assassin known only as Agent 47. His hallmarks are lethal grace, unwavering precision, and resolute pride in his work. But even 47 couldn't anticipate a "random equation" in his life exactitude: the unexpected stirrings of his conscience and the unfamiliar emotions aroused in him by a mysterious Russian woman.

As for the acting well Timothy Olyphant did a great job playing as Agent 47, most people who didn't like it said it was because he doesn't show any emotion. Well that's why I said he did a

great job because Agent 47 was raised to have neither emotion nor mercy. As for Olga Kurylenko, well she didn't do much but cry here and there in the movie and of course show us that beautiful body of hers. And man was I surprised at how much nudity she shows but then again that's why I liked her performance. [Laughs]. As for Dougray Scott who does one the best performances in the movie, plays Mike Whittier the Interpol investigator who has spent years trying to hunt down and arrest Agent 47 or as he calls him the "ghost". As for the villains in this movie none of which I can really judge because none of the character really have time to develop which in most cases would be a bad thing, but in this case it's a good thing. Also if you liked the movie and plan on playing any of the games I recommend you buy Hitman: Blood Money. It's the latest instilment and best one out the series so far. Plus the movie is closes to: Blood Money than the other two.

Final Say: I had a lot of fun watching Hitman again, more so the unrated version which gave a more insightful look into the plot and a little more violence and gore for the viewers, and though it didn’t make the movie any better it was still has fun as the theatrical cut, I highly recommend.
Copyright 2008 TCWreviews.com
All Rights Reserved
Posted by Clifford Kiyabu at 1:04 AM