Since the release of the 1999 cult classic The Boondock Saints, director Troy Duffy’s stark tale of vigilance, guns and brotherly mayhem have been all the rage in many circles over the last decade and it’s audience continues to grow till this day. But what’s not mentioned here is the dreadful wait many of the fans and Boondock Betties alike had to go through before a sequel was finally produced. Fortunately for fans everywhere however, there won’t be much of a wait to dive back into the world of MacManus brothers, so to speak. No one knows when exactly we’ll get another sequel from Duffy and the gang (if any of the production crew is reading this, then PLEASE hurry up already!) but until that day does come, fans can always rejoice knowing that they’re beloved cult classic continues in a different media format… Comic books!

Last year fans of the popular Boondock Saints’ series flocked to near by comic shops and book stores to collect the 12-Gauge Comics comic mini series “IN NOMINE PATRIS.” which was well received by both veteran fans and newcomers to the series as well as critics for it’s loyal dedication to the core material the comic is based on. And while it may not be the next live action installment in the franchise fans are eagerly awaiting more. It did serve as a satisfactory alternative to the films which would keep the fans busy until the next installment. However, if you haven’t picked up your copy of this vigilant tale of mayhem and rough justice or is just hearing about it now, then you might want to hold off just a bit longer before picking up a copy as 12-Gauge Comics is re-releasing the graphic novel “IN NOMINE PATRIS.” in two special limited collector’s editions just in time for the holidays!

The HARDCOVER is LIMITED to 850 COPIES and includes 16 pages of never before released, new material and a brand new cover by series Producer, Eben Matthews. This new content brings fans behind the scenes of the comic series and reveals the alternate version of the comic series’ second issue including the full story of IL DUCE’S BETRAYAL by “The Roman” and how we come to find him in Prison during the first film. 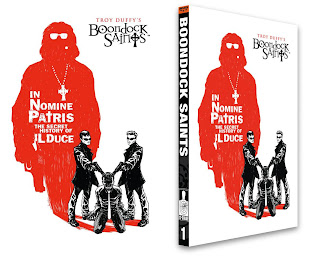 The “BLACK LABEL EDITION” is designed for the ‘Psycho Boondock Fan’ and is the ultimate edition of the Graphic Novel. This package includes the Hardcover as well as an exclusive set of mini-posters showcasing all six comic covers by series cover artist extraordinaire, Chris Brunner. It is packaged in a gorgeous black on black museum quality clamshell case and debossed with the Saints’ Celtic cross and iconic “Veritas / Aequitas”. This edition is LIMITED to ONLY 150 COPIES and SIGNED AND NUMBERED by Franchise Creator / Writer / Director, TROY DUFFY. 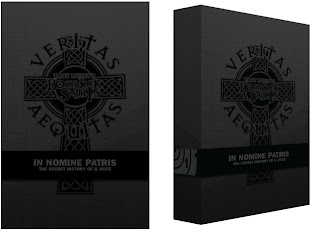 “IN NOMINE PATRIS” is Troy Duffy’s first foray into comics and the first outing of the Boondock Saints in a whole new medium. While staying true to the characters and tone which has made The BOONDOCK SAINTS films among the most successful independent movies of all time, this brand new story written by Duffy and comic scribe, J.B. LOVE is the perfect companion to the films. 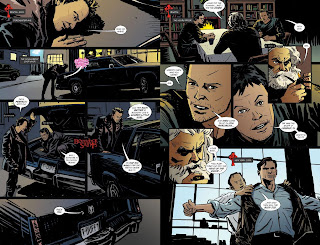 The hit comics series masterfully interweaves the events of the BOONDOCK SAINTS II: ALL SAINTS DAY with brand new material to reveal the secret history of the original saint, NOAH MACMANUS (IL DUCE) as he wages a bloody war against 1960's New York's Underground Crime world.  The storyline is intercut with brand new adventures of the BROTHERS MACMANUS  (The Boondock Saints) doing what they do best; dolling out their special brand of justice to those that deserve it.  "In Nomine Patris" brings a new chapter of the Saints saga to life while revealing the families LEGACY OF VENGENCE that created this trio of "Shepherds". 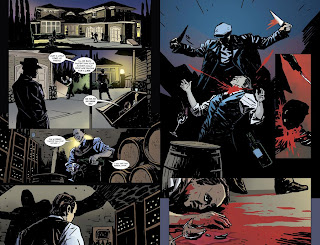 Featuring a forward by Connor MacManus himself - actor, SEAN PATRICK FLANERY - Join Troy Duffy and his comics team in this thrilling new Saints Adventure by pre-ordering these deluxe collectors editions. In addition to the Hardcover’s exclusive content, the graphic novel collects all six comic issues, never before seen art, a cover gallery, behind the scenes sketches and more. This is the story that answers many of the questions raised by the two films, now packaged in two highly collectible editions sure to delight any hardcore Boondock Fan. 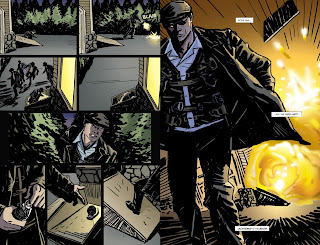 Both the Limited Edition Hardcover and Ultra-Rare “Black Label Edition” are AVAILABLE FOR PRE-ORDER EXCLUSIVELY FROM THE OFFICIAL BOONDOCK STORE (www.boondockstore.com) and will ship in time for the holidays.

As stated above, both collector’s editions are available for Pre-Order right now, the Limited Edition Hardcover will ship in mid November while the “Black Label Edition” is set to ship in mid December.
Posted by Clifford Kiyabu at 5:05 AM