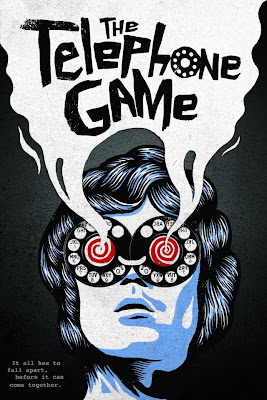 The Telephone Game opens in a dramatic and ominous fashion, bringing us to a theater where most of the film takes place. Marco DeGarr (Tank) is holding auditions for his play. When Zelphia (Chamberlain) reads for him he knows she’s his leading lady and he becomes completely infatuated with her. Marco decides that he should be the one to play the lead, Zelphia’s romantic interest. He thinks he’s the only one who can understand and bring the necessary depth to the role. Zelphia and Marco start spending a lot of time together. A romance quickly develops with them, making many question whether this will complicate the show.

Before long the play quickly unravels as Marco’s sanity is questioned. Zelphia doubts if the man she fell in love with is still there anywhere. Despite everything, she is still trying to keep the play together since she knows Marco’s intentions are in the right place. She connected with the play and her character and she can’t bare to let it see fall to pieces. Then again as Marco said from the beginning, “It has to fall apart before it can come together again”.

The Telephone Game offers some interesting insight on writing, people, and the relationship between fiction and reality. Zelphia questions who Marco wrote himself after. He tells her there’s a little bit of him in every character; “everybody’s a little bit of everybody”. As a writer the whole world you create comes from your mind and those that surround you. If it’s not directly a piece of you in a character, it’s a piece of your experiences and how you see the world. The play is almost a character itself. It’s even bigger than its creator, having the ability to affect everyone involved for better or worse. The film really shows the struggles and hardships of putting on a production, just as how one can get so completely caught up in it.

The cast was incredible and really added another dimension to this character-based film. Wes Tank did a great job as Marco, showing the many layers of him. Having written the play that the film is based off of, it’s not surprising that he had an understanding and connection of the character and the material. Everyone involved could find some parallels, but it seems like this relationship would be stronger with Wes more than anyone else. Haley Chamberlain was a gem, simply glowing every minute she was on screen. She has a certain charm and grace to her that translated to her character and making it easy for us to see why Marco was so infatuated with her. Everyone who portrayed part of the theater cast and crew really did a great job creating a stellar group dynamic, some of the more notable performances by Rachel Grubb, Andrea White, Alisa Mattson, and a nice little cameo by Brooke Lemke.

The cinematography in the film is beautifully done. It’s all in black and white and really makes the most of the lighting and shading. There is great attention to detail, making for a very atmospheric and genuine film. It is questioned how genuine a piece of fiction can be since by definition it’s not real. Especially people like actors and writers who’s lives are wrapped up in bringing these stories to life, it can be hard to separate fiction from reality. We see it causing identity crisis’ as well as connecting people and giving them meaning.
Posted by Kelsey Zukowski at 7:57 PM