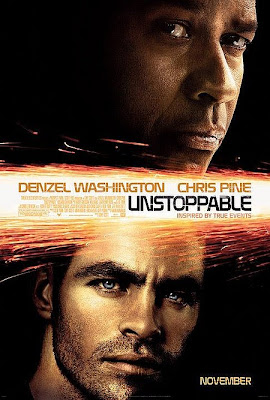 Depending on relentless action has been for director Tony Scott a necessity, almost to the point where his films are never able to prevail over the impertinent unless he succumbs, and yet again embraces, a gallant spectacle of improbable explosions. Some fancy this style of direction. But once all the booms, fires and crashes have dissipated there is a feeling of disengagement. Previous films from Scott are like this (“Déjà Vu”); they are forgetful because he abates humanity, unhinging his audience from any opportunity that could grant us the slightest semblance of emotion. With his latest film “Unstoppable,” humanity is permeating the entire picture, evident in every frame right alongside Scott’s fervent obsession with unrelenting action. The results surprise us.

Everything is augmented to a tremendous magnitude. Everything! Scott takes full advantage of a huge steel monster of a train (consisting of 39 cars) that is unmanned and carrying highly explosive materials, torpedoing down the rural Pennsylvania railroad tracks on its way toward Scranton, a highly populated city of about 70,000. Scott does not hesitate to cash in on this incident based on true life events (originally occurring in Ohio in 2001). Surely some fabrication has been used which can be accounted for due to some insanely implausible occurrences.

This entire catastrophe is ignited by Dewey (Ethan Suplee), a lazy railroad worker who is unforgivable in his doings. This human error sends in motion a series of potential cataclysmic events (school children onboard train!) that are unabashed in its approach to incite the crowd. But what outshines all the carnage, explosions and unceasing adrenaline rushes is Scott’s newly found ability to locate what truly makes cinema pure: Humanity. 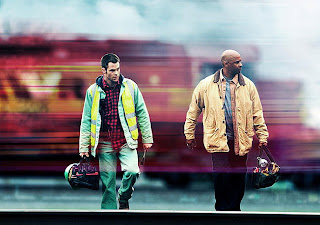 Scenes are many where we have dialogue that does not feel like it is being shoved down our throats. Instead it feels voluble and unforced, evoking the atmosphere of blue-collar workers who are comfortable in their environment. The potent dialogue begins and ends with the 28-year veteran train engineer Frank (Denzel Washington) and Will (Chris Pine), a four month rookie with connections in the business. They are currently on a job. It is early in the morning. We see the fog dissipating; discern their breath as it hits the cold air; and are immersed in the cold, brisk atmosphere that is surrounded by trees of multiple colors and some that have fallen victim to the coldness, bearing no leaves at all. This is all beautifully captured and can even be seen as another character as the runaway train will plow through this gorgeous environment promising to decimate all in its path.

Frank and Chris are conducting a single car train. Frank initiates the conversation by asking Will about his love life. Typical guy talk. Will tells him it is a long story. Frank replies by telling him that they have all day. They do have a long work day ahead of them. Frank sees this as being an opportunity to bond with Will; the older generation willing to talk and engage, while the younger generation more mute and stand-offish. 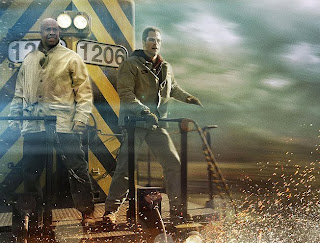 Little does time pass before Frank is told that an unmanned train is heading his direction. He communicates with an overwhelmed traffic control officer played by Rosario Dawson who urges him to play it safe. But come on, this is Denzel Washington; we know he is not going to shrink away from saving the day. With all the commotion occurring outside the train of Frank and Will - the insatiable news stations, the train company’s money-hungry CEOs, the near fatal crashes and close calls of derailment by the runaway train - we find shelter from the storm. Scott distinguishes two separate environments. He balances the quarrelsome behavior with the serenely calmness found within the single car train. It is a juxtaposition of the panic-stricken society with the assurance of two men who are not afraid to die.

But what is even more appealing than this juxtaposition of environments is the communication emerging between two distinct generations (veteran/rookie, old/young). We see the differences of Frank and Chris decrease over time partly because they actually listen and talk to each other without any preconceived judgments or prejudices and, secondly, their initial considerably distanced relationship becomes condensed because they realize humanity is at stake. It would help that people were on the same page while trying to save a town from complete devastation. 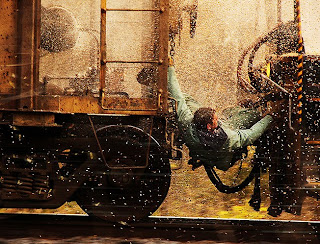 Scott needs to be fortunate to have Washington and Pine onboard. They are both the embodiments of their respective generations; Washington is the protector and we feel safe when in his presence; Pine is the rebel (as seen in “Star Trek”) who wants to do it his way but still smart enough to adhere to a more experienced individual. Surprisingly enough Scott sees the potential here. Such prodigious potential it is. Many of Scott’s movies are incommunicable and not participating in human personalities that are integral to the picture he is making. With “Unstoppable” he shows a sincere reverence for dialogue. And as we listen to Denzel and Chris talk, as they fly 70mph down the Pennsylvania railroad tracks, we do not want to leave their train. It is the only place where reality is occurring and communication flourishing. Once we leave their company, no matter how entertaining it can be, that flame of reality is extinguished by the overbearing force of things that have the tendency to explode into thousands of pieces.
Posted by Clifford Kiyabu at 10:14 AM