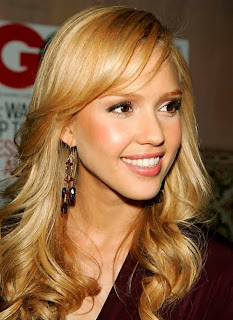 The other day while covering the Kat Dennings photo scandal I failed to take notice of another photo scandal that was amidst in the web that I had no clue of until recently (forgive me dear readers but sometimes things will slip through the cracks, or I‘ll just simply not want to cover them. This being the latter of course).

Anyway, it appears that actress Jessica Alba has found herself in the middle of a photo scandal frenzy! Topless photos of the actress, who’s refusal to do on screen nude scenes have been leaked onto the adult website ‘Fleshbot.’ The photos are cell phone pictures that she had sent to close friends which documents her pregnancy shortly before the birth of her daughter Honor Marie. The photos couldn’t have arrived at a better time for the actress’s career as she is facing some backlash for her recent interview in Elle Magazine which has been met with tough criticism by some around the blogosphere.

One of the many quotes she‘s being criticized for in her interview (among other things said in the interview) ‘I’m shy. I do not like being the center of attention. When it comes to comedy though I lose all of my inhibition and I no longer care’ said Alba in her interview. ‘The time that I don’t spend with my kid has to be worth it. Now I prefer not to be the lead. I like this better. It is a whole different approach.’

One of the photographs display Alba lifting her shirt and showing off her swollen, pregnant stomach. Another of the photographs also displays a fair shot of her exposed breasts. The pictures were meant for personal sentiment purposes in nature and were not taken to be explicitly sexual in any way, rather to simply document her pregnancy.

It’s also been made clear that the pictures were taken in the presence of her husband, Cash Warren, which only furthers proves the story behind these photos being meant for documentation.

Personal opinion on Alba’s interview aside, it’s obviously clear that these photo’s of the actress were not taken for sexual purposes nor where they planted by Alba to be leaked, anyone who observes the pics will take notice that these pics were undeniably meant for displaying her pregnancy and nothing else, it’s only unfortunate that certain other parts were also visible in the photos.
Posted by Clifford Kiyabu at 11:03 AM