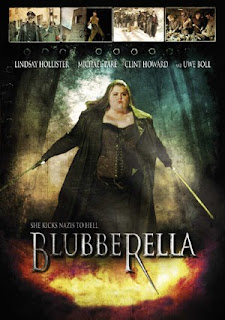 There are only so many things in the world that is considered offensive. But director Uwe Boll would like to prove otherwise. Known for his work on video game based movies, the director has gone on to up the notch of offensiveness with every passing film. And some argued that he’d finally reached the limit - a low that any person could possibly go - until word of his latest project ‘BLUBBERELLA’, a story about an overweight superhero who fights Nazis while keeping her unquenchable hunger for food at bay.

For a while now some thought the project to be a horrible rumor, seeing that the synapses alone seemed too much of a joke to be taken seriously even by Boll’s standards and the only shred of proof was a poorly design poster that looked like a fan made it instead of a professional so have even said that the project itself was a rumor made up by a fan of the filmmaker, however the rumor has finally been debunked as a trailer for the feature project has hit the web and my is it ever so offensive to viewers everywhere! We at TCWreviews will not support this project by putting the video up on our site but will gladly redirect you to a site that does have it up online, so head on over to Joblo and check it out for yourself!

Despite not showing any support for his latest or past projects I have to say I at least respect director Uwe Boll for sticking to his ideals when making a film.
Posted by Clifford Kiyabu at 10:59 AM