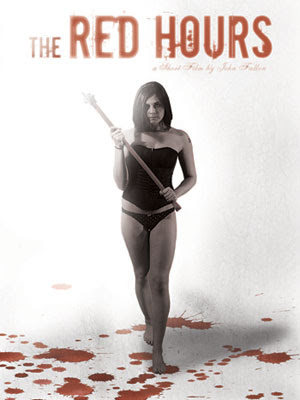 Plot: On one fateful night at a lowly dive bar, the tension between two lovers finally explodes resulting in a soirée of blood, chainsaw and bullets.

The Story is about: A quiet war is transpiring between lovers Marc (Deke Richards) and Natasha (Amy Wickenheiser). The more mature and old fashion Marc can't come to terms with his better half being bisexual hence he's constantly feeling hurt and resentful. On her end, Natasha feels criticized and un-accepted, consequently finding comfort in the arms of her lover Drew (Heather Westwood). The tension between them all reach a critical mass as the boiling point of their relationship results into chaos.

My Thoughts: As an online film critic, I enjoyed closely following the critiques of other fellow columnists and critics in my field, one that easily comes to mind is Actor/film critic John Fallon (AKA Arrow in The Head from Joblo.com.) a film critic who’s own 2 cents caught my attention early on when I was still a voiceless moviegoer in the overwhelming crowds. I often at times found myself concurring with his critiques 60 to 65% of the time (I’ve highly disagreed with him on a few films in the past, but luckily this should remain as proof of my unbiased nature on the matter). Since than I’ve had the opportunity of interviewing him personally which was both an honor and a pleasure. I’ve also had the chance to review a film in which he starred in (DEADEN (2006)) which aside from a few flaws I found quite enjoyable especially with how he handled himself as an actor in the film. so seeing that he’s taped into the field of critiquing, acting, and producing it was only a matter of time, in my opinion, before he’d have his hand at directing and writing, luckily for me, he’s done both in a little known sort film called THE RED HOURS (2008). 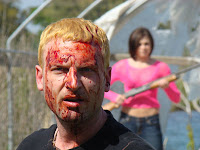 HOURS is a film which proved to be strangely alluring. The film’s tone is set from the start of the very first frame which gives it’s viewers an insight into shear madness. We are shown Mark, a man who‘s in the bathroom of a rave party looking into a mirror at himself, while at quick glance it seems he‘s just looking at himself, it becomes clear that Mark is doing much more, he is starring into his own soul which is obviously filled with rage and discontent regarding his relationship status with his girlfriend and is un-doubtable suspicions. From this moment on the line between reality and delusion begins to blur and we are taken to a chaotically horrific setting where Mark is awaken tide to a char while his girlfriend and another woman make out while holding a human heart (or at least that‘s what it looked like to me) from here the story takes a dramatically pulse pounding race for survival leaving the viewer on the edge of their seat wondering how will it all end. Some will argue that this film is an art house piece while others say it’s surrealist piece. I say it’s the type of short film that filmmaker’s Stanley Kubrick and Alfred Hitchcock would have cooked up had they ever worked together [Laughs]. But seriously, TRH is a marvelous surrealist piece that really digs deep into the human psyche and shows the war that we fight within ourselves and the meaningful concept of doomed relationships and how we’re all sort of on a one way rollercoaster ride down the rabbit hole of insanity and the best thing most can do is sit back and enjoy the ride. Fallon defiantly took point from the formulated ideas of some of the greats when making this and I respect him greatly for it. The film’s plot doesn’t try to makes sense of itself (so don‘t bother attempting to do so) but rather explains to you the moral of the story, not through dialog but through it’s individual impulsive actions which are mirrored though the emotions of the main character creating a horrific delusion full of pain, fear, misery and utter chaos that leads up to the ultimate punch line, a kiss of death. Some of what I’ve said may not make much sense to you but make no mistake about it that TRH is a remarkable piece of film art that speaks to a generation living a lost cause of failing relationships and trying to understand that which is meant to die.

ost part professional but a bit of a mix bag, but despite having a run time of only 10 minutes in length the actors manage to create an atmospheric overtone that brought an alluring sense to these characters which proved to be both entertaining and fulfilling. Deke Richards who’s worked with John Fallon numerously in the past as co-stars on a number of previous projects, is now working together once more but this time as star and director. Richards pulls off a fine performance which was both edgy and thought provoking because most of the film’s foundation is built upon his physical reactions and impulses. I’m not very familiar with Heather Westwood or Amy Wickenheiser’s past works so there’s no chance at me giving a proper comparisons, but, their performance was passable to say the least in my opinion and help add some depth to the story working opposites of Richards.

Final Say: If a picture is worth a thousand words, then THE RED HOURS is worth that amount tenfold as it’s without a doubt clear that Fallon’s put a lot of effort and hard work into developing this sort into nothing sort of creative art at it‘s best. Though it may not be for everyone it‘s highly recommended taking a look at. I highly recommend it!

Copyright 2010 TCWreviews.com
All Rights Reserved
Posted by Clifford Kiyabu at 11:09 AM