Sarah Jessica Parker was once considered a diamond in the rough in terms of being a rising star who could act and was easy on eyes… now days she just considered by some as rough (To much Sex and the city can do that to you, you know). Well it appears that the actress will be starring in a new film next year called I DON’T KNOW HOW SHE DOES IT based off of the acclaimed book by author and controversial columnist, Allison Pearson’s book ‘I Don't Know How She Does It: The Life of Kate Reddy, Working Mother’and is said to follow the book closely to the letter. The film hasn’t received a targeted release date yet other then a TBA 2011, which is assuming it’ll probably hit theaters some time in the fall of 2011 seeing it hasn’t been filmed yet.

The film is being described as “A comedy centered on the life of Kate Reddy, a finance executive who is the breadwinner for her husband and two kids.” Parker is set to play the lead role but is that enough to get moviegoers to live their home and go out to the cinema to see it? Well this may not gain much female viewership but the film is guaranteed quite a few male viewers to head and see this on opening weekend as the studio has already cast the voluptuous bombshell ‘Mad-Man’ star, Christina Hendricks, and former G4’s ‘Attack of The Show’ co-host Olivia Munn in supportive roles. No word as of yet as to what parts the two actresses will play then along how much of the film’s plot they’ll be a part of but one thing is certain, no matter how the film turns out, weather it be a success or a failure having these two actresses in it will guarantee you gossip by fan boys of the two starlets and even some brave souls willing to sacrifice seeing a chick-flick to get a glimpse of the two stars. 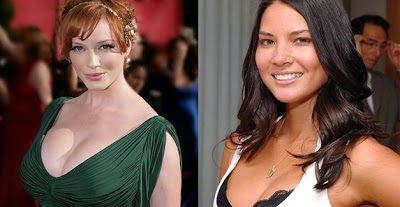 A part of me however, can’t help but feel that Hendricks and Munn were cast to gain a more visual appeal towards this film, seeing that having Parker (though she pulls in a decent amount of revenue for her films) in the lead just doesn’t cut it anymore to gain physical attraction to a film these days (Need I remind everyone again the horror that was Sex and The City 2?) and let’s face it, with the exception of Hendricks, I kind of feel that Munn isn’t being cast for her acting qualities either. Pierce Brosnan, Kelsey Grammer and Seth Meyers has also joined the cast.
Posted by Clifford Kiyabu at 11:44 PM