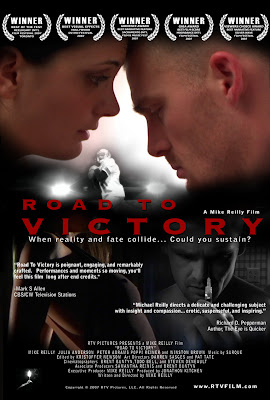 Plot: A star athlete on the verge of turning pro must decide which dream to pursue while he battles his own body.

The Story is about: An injured college athlete, accused of taking steroids, falls for a stripper, but is unable to perform sexually. The relationship oscillates between tender and cruel; issues of infidelity, along with doubts about his ability to father children arise, as his on-field performance begins to decline, putting his draft status at stake. Road To Victory is a thoughtful look at the role of gender in the patient / physician relationship, limits imposed on physicians by changes in the health-care industry, and even the limits of drugs designed to replace the physicians. It asks the question of what level of fidelity is acceptable in a relationship where sex isn't possible. And lastly, it looks behind sensationalized media headlines over steroid abuse, at the human elements that really drive athletes to succeed, and the price associated with the choices required to achieve that success.

My Thoughts: The journey to one‘s recovery is a process that often at times leave tire marks on the human psyche as it is filled with stress and emotional pain that will take it‘s toll on the most strongest of willed people, and a fight to win this recovery isn’t always a simple one. But the anecdote to the journey is a well deserving lesson to be learned, to heal; one must be ready to choose to let go the thing they love most or that which completes them, which are never always the same.

st heard about Mike Reilly’s feature length directorial debut, Road to Victory (2009) I initially thought this was going to be another sports film because everything about it that was advertised commercially screamed ‘football’ movie! The trailer said it, the poster said it, even the synapses hinted at it. However when taking a closer look at the film (Thank goodness). You discover this film is far from being a sports movie, though football is shown throughout the film, it plays somewhat of a minor role at best to the plot. What the Road to Victory actually turned out to be is a very powerful and engaging his & her relationship film that dug deep into the real problems some couples face once the honeymoon of the relationship has passed, such as intimacy issues, and feeling suffocated by each other which leads to communication between one and other to break down into a bitter ending. Unfortunately for the main characters of RTV, the cute puppy love period of the relationship was over before it even began. The main characters, Elliot (Mike Reilly) and Anna (Julia Benson) are experiencing some pretty though obstacles to overcome only three months into their relationship. Elliot, a star quarterback football player on the verge of professional football stardom is having trouble being able to perform sexually with his girlfriend due to low testosterone levels, the decrees in testosterone is also affecting his ability to perform antiquely on the field as well as on a every day to day bases. As the accusations about whether or not substance abuse had anything to do with his impotence pile on, he’s having an even harder time coming to terms with Anna working as a stripper at a local club. Anna is having a hard time dealing with their sexless relationship and is beginning to have doubts about their relationship together and if weather or not remaining with him is a good idea in the long run, a part of her wants to experience the experimental years of her youth in collage but retains too much ernest love for Elliot to just simple walk away. While they share a sincere love that goes maturely both ways, Elliot and Anna will be tasked with making the ultimate decision, can they’re love for each other be enough to save what they have together or will it be they’re undoing?

RTV was fascinatingly seductive, it lures the viewers in and capture they’re attent

ion fully, it was the first mature romance drama for both genders I’ve seen in a really long time, most romance dramas out there are meant to cater to female moviegoers rather then it’s male counterpart. It’s an unfair tone the movie industry has stuck with for quite a long time, but thankfully Mike Reilly shed light on this problem and brought to the table a film that’s powerful message can be enjoyed by both sexes, and presents some very pressing matters. Substance abuse among athletes have been in the media quite often lately but only half truth’s behind the reason some are willing to make a compromise with their ideals. People love hearing or reading up on the gossip behind athletes being accused of taking steroids and the constant denial of it in hopes that eventually one of them will crack and tell all. It’s easy to take in the how and the when, but not the why, no one ever wants to hear why they took it, what magnitude of stress to maintain a picture perfect image we perceive of them were they under before deciding to forgo on such a disappointing path. And even if they’d fully explain themselves would you listen then alone believe it? The film explores the harsh reality most men go through when not being able to be 100% with their other half, contrary to popular belief; men and women are equally vulnerable emotionally, though most men may not express their inner emotional stress as commonly, the ability or lack therefore of, to perform harbor great emotional stress that takes it’s toll on both a man’s physical and psychological health over time.

But make no mistake about it, RTV is a relationship film first b

efore anything else, and shows the reality of relationships and not the commercially manufactured version we’re sold by the mainstream industry. Real love isn’t the happy-go-lucky “love defeats all” message we’re told by mainstream films, real love is when the spark between a couple dims, or in most cases, die, and you find yourself gunning for each others throats half the time, thinking about how to get back at each other, but no matter how much you think you can’t stand to look at one another; you find that you cannot for the life of you imagine a life without that special other in it. Among other things, the score was truly remarkable, it set the tone of the film with it’s deep emotional overtones that proved to be quite affective in every way, I being a fan of movie scores found it to be one of the best attributes this film has going for itself, because it complements the story and graces every scene in just the right manner. Like all films though, RTV doesn’t go without flow and lags for the most part of the first act, but thankfully it‘s quickly saved towards the end of it‘s second act which picks up the momentum for the closing act.

As for the acting: movieScope Magazine in 2008 named Mike Reilly as 'One to Watc

h', before going into RTV I had no idea what they meant by it, was it his acting skills? his writing? Or maybe his directing? Well as it turns out it was all of the above, Reilly’s performance as Elliot proved to be extraordinarily entertaining, and I can certainly understand the appeal by movieScope for naming him “one to watch“, his performance as Elliot was outstanding because it project the troubling truth on what effects low testosterone levels play on the male mantle and physical state. His acting, though flawed, turned out to be quite enjoyable and shows great room for improvement with time. Most may not realize that Julia Benson have been in the biz for quite some time now appearing in mostly Sci-Fi shows and films, in RTV Benson portrayal of Anna was magnanimously wonderful. Her portrayal was spot on fantastic for a character that was a real love/hate combination for me, while I hated Anna’s overzealous negative treatment towards her boyfriend Elliot, the way she belittled him about his condition at certain points proved to be a real deal breaker in terms of liking the character. However, in the most dire moment of the film Anna is redeemed in my eyes when she show’s the willingness to stick by his side no matter what the outcome. The chemistry between both actors proved to be brilliant and worked on a believable level.

Final Say: Looking back at Road to Victory, it turned out to be more impressive then I originally expected. Ultimately it dares to ask an important question for both men and women. For the Men: are you man enough to put aside games to settle down and start a family? And for the Women: if your man suddenly became ill beyond medical ad, would you still stand by his side trough think and thin? though dreadfully hash these questions may be, it reminds us all one important piece of advice; be there for those you love no matter what, and always choose what’s right, over what’s desired. I highly recommend!