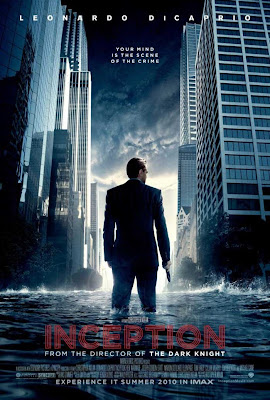 Plot: In a world where technology exists to enter the human mind through dream invasion, a single idea within one's mind can be the most dangerous weapon or the most valuable asset.

The Story is about: Dom Cobb is a skilled thief, the absolute best in the dangerous art of extraction, stealing valuable secrets from deep within the subconscious during the dream state, when the mind is at its most vulnerable. Cobb's rare ability has made him a coveted player in this treacherous new world of corporate espionage, but it has also made him an international fugitive and cost him everything he has ever loved. Now Cobb is being offered a chance at redemption. One last job could give him his life back but only if he can accomplish the impossible-inception. Instead of the perfect heist, Cobb and his team of specialists have to pull off the reverse: their task is not to steal an idea but to plant one. If they succeed, it could be the perfect crime. But no amount of careful planning or expertise can prepare the team for the dangerous enemy that seems to predict their every move. An enemy that only Cobb could have seen coming.

My Thoughts: A professor in philosophy once posed a question onto his students “How can you prove to me you’re not merely a part of someone’s dream?” the students were for the moment, clueless. After the silence had over stayed it’s welcome the professor of course told them the correct answer to the question which was: “I am able to think, therefore I am alive.” Hence one of French philosopher René Descartes’ most memorable quotes “I think, therefore I am”. but unknown to someone like René Descartes, who was born in the 17th century, the wonders of technology was still a distant dream away, but not unknown to the people of the 21st century, the possibility is but an invention away. As man relentlessly attempts to unlock the secrets of his own potential, the idea slowly becomes the reality, and the line’s that which separates reality from dream begins to grow more and more elusive. One can only imagine what the future will bestow us.

blockbuster, The Dark Knight (2008). bring forth the stunningly eye popping psychological thriller, Inception (2010). A film that captures the terrifying possibility of a world where corporate espionage has reached horrifyingly new heights. Where a person isn’t safe in the most sacred of place, their dreams. Imagine a world where information could be extracted from you’re subconscious while you slept comfortably unaware of the theft, the idea of someone being able to access you’re deepest, darkest secrets is without a doubt both a fascinating and frightening thought I can promise you that. Firstly before I say any more there’s something that’s got to be known; over the years I’ve grown to greatly enjoy Nolan’s work as a filmmaker, it seems that with every passing film he seems to better his filmmaking technique and style. However, every artist reaches that halting point in their work where they’ve hit a wall in they’re potential, sort of speak. For filmmakers this is a very troubling thought because for many of them, once you’ve hit that stopping point it may take years and a slew of mediocre films placed unto their career’s before finally getting that groove back, but for some there’ll never be a way. I was more than convinced that Nolan hit that wall with THE DARK KIGHT, I was certain without a doubt TDK was Nolan’s Sistine Chapel and that nothing would ever amount to it’s greatness, and perhaps it was his breaking point as both a blessing and a curse. However that was until I saw INCEPTION, which not only proved me wrong, but stood as proof that no matter how great the achievement may be, there is always room for further improvement.

INCEPTION in my honest opinion, will stand the test of time as a remarkabl

y fantastic film with gorgeous, yet intoxicating visuals that are beyond explanation by words to properly give it justification, the best way I could possibly put it into nearly comprehension of how great it was visually, would be compeering it to a dream coming to life right before your very eyes. And not since last year’s AVATAR have I been so engrossed into a film‘s special effects that I was left utterly speechless. But if the effects weren’t impressive enough, INCEPTION is further complemented with an incredibly stunning score done none other than by the likes of legendary master film composer Hans Zimmer, who’s score creates the perfect mood for the film’s tone, and complements each and every frame from start to finish. The plot is captivatingly alluring. The film starts off presenting a highly incoherent opening only to rain much more layers of complexity onto it’s viewers, weeding you (the viewer) into it’s complex world of wonders, with Nolan as the storyteller guiding us through this world of high-stakes corporate espionage, in which it take more than just wits to survive, but also a strong will to prevail. As the story goes on, the complexity of the plot begins to make sense as the mystery slowly unravels itself, only to be twisted and further perverted into more mystery and madness as the film’s plot takes new unexpected twists and turns which lead up to a shockingly explosive ending that will have moviegoers talking about long after the movie is over. INCEPTION is without a doubt a top contender for best of 2010! It is highly recommended.

As for the acting: like all of Christopher Nolan’s past films, the

choice in actor’s and the quality in which their performance is handled plays a strong role in making the film all that more worth seeing, in fact one could argue that the performance’s in Nolan’s films plays out equally as good as the writing itself. Leonardo DiCaprio gives a chillingly delightful performance in the lead role of Cobb, a character who’s motives to get back to his children has no boundaries, the man will literally walk through limbo itself if it means a ticket back home to his children, but as the film goes on we learn some troublingly disturbing things about Cobb’s past that makes us question the sake of our own humanity. DiCaprio has certainly come a long way from being the boy we once remembered on a daytime TV sitcom. Joseph Gordon-Levitt has really come into his own over the years, once being known as the adorable child star actor in the early 90’s, Levitt has proved that over the years that he was more than just another child actor with every film he’s starred in over the years (with the exception of GI JOE) that his performance get’s better and better. Ellen Page is without a doubt one of Hollywood’s most adorable young actors, she can manage to pull off being both hotheaded and coolheaded with such ease and grace it’s no wonder so many moviegoers now days fall head over heels for her. With INCEPTION she pulls a stellar performance that showcases her maturity. Tom Hardy gave a fantastic performance , for anyone who has yet to see the 2008 British biopic BRONSON, Hardy’s ability to transform himself into the role he’s playing it quite magnanimous and deserves recognition. The first time I noticed Ken Watanabe as an actor was in the winter of 2003 during a special by invitation only midnight screening of THE LAST SAMURAI (2003). Needless to say, his performance made I and everyone in that room weep with such heart felt emotion, his performance three years later as General Kuribayashi in LETTER FROM IWO JIMA (2006) also struck a cord emotion by viewers. And the power behind his talent knows no boundaries as he gives a breathtaking performance that will have viewers griped to their seats once more.

Final Say: Inception was a breath taking adventure into the lustrous unknown and proved that expectations are meant to be exceeded no matter how high the standard. Inception was a wondrous film that will stick with you long after the film is over and It stands to reason that it is without a doubt going to stand the test of time as a true classic, and like all classics I believe it’ll stand out as the subject topic of teaching proper filmmaking in film schools some day. I highly recommend it!