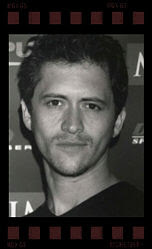 Clifton Collins Jr. is an actor I like to consider as a jack of all trades when it comes to character acting. Over the last few decades he’s managed to make us see him in many different lights with his various performances.

From wowing us as the hero, to making us cringe as the villain, to making us relate with him as Mr. nice guy, and loving to hate him as the A-Hole, never once has he failed to entertain us, nor has it been a dull moment.

So when good friend Wendy Shepherd over at studiomatrix mentioned to me this morning that it was Clifton Collins Jr’s 40th birthday today, I felt the need to spread the word both high and low for an actor who‘s incredibly underrated!

Being the all around good actor that he is, Collins has appeared in a great deal of memorable films, of the many film’s he has appeared in, STAR TREK (2009), CRANK: HIGE VOLTAGE (2009), EXTRACT, BROTHERS (2009), and last year’s cult sensation, THE BOONDOCK SAINTS II: ALL SAINTS DAY (2009). are just a small number of films I can recall off the top of my head he’s been in as of recent.

Aside from acting he’s also produced quite a number of films in the last few years, and has even been quoted for saying he studies “like a madman” when preparing for a role. But a madman he is not in real life, he's known by friends and fans alike as being one of the most kind and down to earth individual you will ever meet.

So we at TCWreviews would like to wish Clifton Collins Jr. a happy 40th birthday, and thank him for giving us all the fond years of serves on the big screen and wish him a wonderful 40 more years ahead! So for all the fans out there, if you happen to see him out and about today make sure to give him a handshake and thanks for providing some mighty fine entertainment!

Drop by his official website to learn more about what he’s been up to at: cliftoncollinsjr.com

Also while you're at it check him out in the music video to “High Cost of Living” by Jamey Johnson: HERE
Posted by Clifford Kiyabu at 8:01 PM