The City of Gardens Wraps Filming in Lima, Peru…Production Moving to Los Angeles.

Twilight is just around the corner, and already the sight of twihards stampeding through theaters lines are already beginning form, don’t believe me? Don’t worry because when the sound of the horrific act echo’s throughout the valley just remember I told you so!

But for now, the fans of the Twilight films (you know who you are) will have to make do with some (Unrelated to Twilight) news regarding one of it’s stars, Alex Meraz, who is starring in a new film being made called “The City of Gardens”. 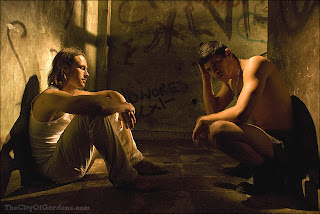 The City of Gardens Wraps Filming in Lima, Peru…Production Moving to Los Angeles.
Dynamic ensemble cast, John Robinson, Alex Meraz, Johnny Lewis, Michael DeLorenzo, Deborah Unger, James Remar and Grant Bowler
star in a story inspired by true events
Produced by Four Fish Films/DragonTree Media
Production is currently underway on the feature film The City of Gardens, which is the 1980s story of a young American surfer, wrongfully accused of cocaine trafficking and sent to prison. Production has wrapped photography in Lima, Peru and will continue in Los Angeles.

The action drama, The City of Gardens, follows a blond Californian surfer, Wayne Montgomery (John Robinson), who is a fun loving beach bum escaping the influence of his wealthy and powerful father (James Remar). Wayne leaves his home in Beverly Hills for the enchantment of exotic Peru. Wayne’s carefree lifestyle and love affair with his beautiful girlfriend, Maritza, (introducing Anahi De Cardenas a Peruvian actress), ends when he is framed during a political uprising. Framing turns into extortion in the sadistic prison.

In the nightmarish prison, Wayne finds himself surrounded by a group of political activists and social misfits, including a schizophrenic who believes he is Jesus Christ (Grant Bowler) and an Icelandic devotee of Krishna, Jorge (Johnny Lewis). Wayne is forced to share a mattress with the animalistic beast that everyone calls Nicaragua (Alex Meraz) which leads to a confrontation between them.

In a desperate attempt to gain freedom, Wayne meets with Consul Powers (Debra Unger) whose hands are tied by the false drug charges. As Wayne's naivety dissipates, another nemesis, the power hungry Lt. Gutierrez (Michael DeLorenzo), moves to break Wayne´s spirit, torturing him to extort money from his family. Left with few options, Wayne adopts a new ethic – engaging the Peruvian activists, sharing his gifts with them and learning the importance of faith through his sympathetic friend, Jorge (Johnny Lewis). Wayne challenges Lt. Gutierrez’s authority, confronting the depravity of corruption and abuse with his newfound spirit and courage. Wayne´s confrontation with Gutierrez propels the story to its final climax.

Monty Fisher’s Four Fish Films endeavors to develop and produce feature films, focusing especially on the cultures of both North and South America.

You’re probably scratching your head right about now wondering why’d I even mention Twilight if it has nothing to do with it other than it starring an actor from it? Well maybe I wanted to bring this to the attention of the fans, or maybe I just wanted to mention it to screw with the fan base a little. Yeah, I’m cynical that way…anyway you can learn more about the film The City of Gardens by visiting it’s official website HERE
Posted by Clifford Kiyabu at 10:06 PM