There’s something about the city of New Orleans that’s fascinating. From it’s beautifully aged unique architectural styles which reflects the city's historic roots and multicultural heritage, to it’s world famous Cajun cuisines. It’s produced a wide array of musicians and sports athletes, and for being the party city that never sleeps during it’s Mardi Gras session. No I’ve never been there myself, but I’ve studied it from books and documentaries, and what I’ve learned from them is, despite the city enduring some of the most dangerous of natural disasters that side of the United States has ever seen, it’s citizens however have proven that you can’t keep them nor they're city down for long. One cannot deny that it’s got a natural atmospheric setting that’s very alluring. 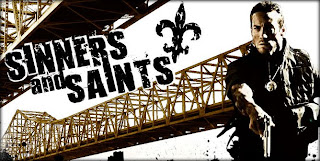 Sinners And Saints movie premiere is expected to have a full celebrity
cast in attendance. Tickets are being sold to this star-studded event
to benefit Common Ground Relief (A Non-Profit organization focused on
rebuilding post-Katrina New Orleans and surrounding areas). The
premiere will be held at Arclight Hollywood Cinema in Los Angeles, on
June 30, 2010.

ALL of The film's stars will be in attendance for this world premier event!

SYNOPSIS:
In lawless storm ravaged New Orleans, beleaguered Detective Sean Riley
is trying to cope with the death of his young son and the abandonment
of his wife. Facing a probable suspension from the department, Riley
is teamed with a young homicide Detective, Will Ganz, to help solve a
series of brutal murders that have plunged the city into a major gang
war. The two quickly realize there is something far more sinister
going on than either could have ever imagined.

You can catch the trailer and learn more about the film and by how you can contribute to this event by checking out it’s official website: HERE
Posted by Clifford Kiyabu at 10:46 AM