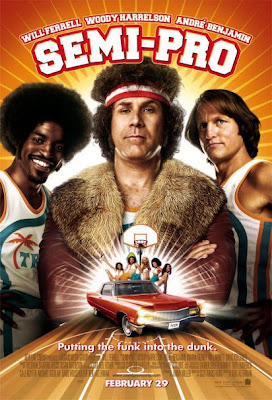 Semi-Pro is a sports film that follows an underdog basketball team, that many might not even consider authentic ball players. This makes the characters seem to be at an even more drastic disadvantage. Although, the film follows a lot of the common steps of sports films, it differentiates itself by using comedy as its’ basis to poke fun at the ABA organization and the entertainment and celebrity that the characters desire and grant themselves with in hopes of others seeing them as big as they dream.

Jackie Moon (Ferrell) is the owner, coach, and player of the Flint, Michigan Tropics, of the ABA league. Moon uses popularity through modeling and countless advertisement and promotional gimmicks. Soon this will be gone, since the entire league is being dropped, the Tropics are devastated this life that they have been accustomed to could be gone forever. Without this, many of them will be at rock bottom. Jackie can’t stand this thought and refuses to accept it. There are four teams in the league that will become a part of the NBA. None of these teams are the Tropics though. Jackie fights this, and makes a deal for the four teams that win the most games to be those who join the NBA. The Tropics have a long way to go to get to this point though. Not only are they not the most skilled players, but their stadium usually doesn’t have the best attendance. This is a major problem and could cost them the little shot they have at beating the many other teams out. It is not just about winning the games, but proving themselves to be the most profitable team.

To attempt to get passed this, Jackie does a few things. The first is bringing in

another player with some experience behind him, Monix (Harrelson). Monix is a somewhat washed up player that once played for the champions, the Celtics. He traded to the far less superior Tropics in order to be close to a past love of his, Lynn (Tierney). Lynn wants nothing to do with Monix as he has clearly abandoned her in the past and the trust is lost for the time being. Monix still tries to make the best of that situation as well as the one with the Tropics. Upon the team’s request, he even takes Jackie’s place as the coach, assuring him that he can take care of the entertainment aspect of it. Jackie does this with continuous stunts and attention grabbers, anything really that will get people in to the stadium, as they need to average 2,000 people per game. These things include a fight with a bear, a roller skating jump over a gym of woman lying on the ground, allowing people to win thousands of dollars if a basket is made, and the crowd winning corn dogs if they win or lose by a certain amount. To everyone’s surprise a lot of these tactics including their new found basketball skills actually seem to be working. The underdogs might actually have a chance of becoming NBA stars, rather than losing everything which was their assumed fate.

The film did some good things, but there is no doubt in my mind that a lot of the enjoyment of the film was enhanced by the talented actors that were involved with this. I have been a fan of Will Ferrell since his early Saturday Night Live Days. Sure he has done some things that haven’t been great and even one that made me disgusted and very disappointed in him, Taladega Nights. With just an exception or so though, he still remains to always have a certain hilarity and spark displayed in ways that I really don’t think would necessarily be as funny if nearly anyone else attempted the same material. Will Ferrell does very well as Jackie Moon. Now he is no Ron Burgundy, Buddy the Elf, or Harold Crick, but it is slightly better than his character in Blades of Glory and at about the same level as he was in Kicking and Screaming. It is really just the way he holds his character in the film and how clueless he is to how ridiculous he can be at times. His energy is there

100% and he doesn’t hold back one bit. André Benjamin is really the one who stood out to me. He has a very youthful and driven nature to him that came out concisely in his character. This character has dreams of playing in the NBA and this seems to be a fantasy that is actually about to come true. He seems real through capability of relating him to us and through his grasp on situations. This is a great contrast to Jackie, which formed a balance and a place for both of them in the story. Benjamin giving some really great performances in Four Brothers, Idlewild, and now Semi-Pro, is one of the most talented and capable musicians turned actors. I look forward to seeing what else he throws our way as I am sure he hasn’t even scratched the surface of his potential.

Will Arnet and especially Andy Richter give great touches to the sport caster’s personalities. They are in touch, lively, and not afraid to have fun with the material at many points mocking some of the bizarre situations that Jackie Moon presents before them. It is especially nice seeing Andy Richter continuing to pop up, since I haven’t seen much of him since the underrated and short lived sitcom, Quintuplets. So it was nice to witness his humor once again. Tim Meadows was also very funny here reminding me of a more wild and daring version of his character in Mean Girls, maybe even with some of that spunk that he displayed on Saturday Night Live week after week. Jackie Earle Haley who gave a riveting and moving performance of a very morally gray character in Little Children gives comedy a go. He played an unemployed bum who won money that Jackie promised, but didn’t really have it in the first place to give away. Now this is obviously far from the type of material that Haley has the intellect and care to handle. However, I kind of liked that it was something so different for him even if it was a smaller part. David Koechner, who typically plays the raunchy and goofy character is actually completely serious. This is completely different for him, but he handled himself very naturally.

Really the only complaint I have is it seems it could have done without the sub-plot with Monix and Lynn. It was by no means bad, but it just didn’t hold my interest as much as the rest of the film. This was partially from the performance by Woody Harrelson. He just didn’t seem real to me, his emotions, who he was, and what he really wanted just weren’t displayed in the way that they should have been in order for me to care about his character. He wasn’t terrible, just ineffective. Even this wasn’t much of a struggle to watch especially since these moments were more minimal. It wasn’t as good as the rest of the film, but it wasn’t all that hard to sit through either; it was just kind of there.

Semi-Pro uses a show like atmosphere, which seems to be far from true basketball. However, it does this to critique the industry. Especially given that the amount of money they can give the league outweighs the talent that they have. It shows that it is all really just about money. When you look at LeBron James having his own lemonade bubble gum with his cartoon face and name plastered on it and a Nike add covering buildings essentially with the message that we should witness the legend that he is, some of the products and things Jackie models for and even his somewhat self involved attitude don’t seem all that unrealistic. It just serves as a representation that they’re not just athletes, but celebrities as well. Not only is it accounted how much money can be gotten out of them, but it works the other way too. Athletes fight over how many millions of dollars they are getting per year when ultimately it shouldn’t matter if it is really just for the love of the game. The film exerts it’s comedy by a ridiculousness of the situation and mostly just by using a illogical, but unique way of handling a challenging situation with quirky and vibrant personalities. Semi-Pro is a decent film with a fun spirit and the talents of a tremendously funny and lively cast with a critique on the sport portrayed in a comedic light.
Posted by Kelsey Zukowski at 12:01 AM