Nothing bares resemblance to M. Night Shyamalans’ previous morbid and dull thriller “Lady in the Water,” “The Happening” forgoes that film and all of the directors previous films to focus under a microscope a topic that relies relatively on nothing, an invisible antagonist, but on the contrary a topic that resonates deep into our world’s given situation. The result is a slowly building suspense film that binds reality and imagination in ways only a bedtime storyteller can conjure up.

And that is exactly what “The Happening” is: a surreal dream (at 90 minutes it stalls a tiny bit along the way). The way that Shyamalan captures the action of everyday people of the east coast frantically fleeing from an unknown evil is pure B movie bliss. The expressions on the character’s faces, the characters themselves and the feel of the movie can be regarded as a “campy” film that provides a good laugh when the occasion calls for severe seriousness. Even at times you might say the actors are acting poorly. But remember these people fleeing aren’t all superheroes or warriors they are your “everyday” people and act as though we would act in their given situation. Each character that meets each other along the way can possibly meet in real life. The casting is spot on (that hot dog guy sure is a hoot).

Above all “The Happening” thrives on the opportunity to excavate a commentary on our world out of a silly yet fascinating plot. The focus is on the death of man and the endless scenarios that add fuel to that fire. In Central Park an incident occurs that involve people stopping dead in their tracks, loosing their train of thought, walking backwards and mumbling phrases over and over again. Then they come to just kill themselves. In a haunting scene construction workers free fall from the top of a building plummeting to the ground with the sounds that make you cringe. Police officers kill themselves with their own pistols and those same pistols are picked up by pedestrians to kill themselves as well. An assortment of unsettling sites come by the boatloads such as dead men hanging from trees and a man settling himself underneath a tractor. At first this is all labeled a “terrorist attack” and New York City is then evacuated.

Shyamalan targets a society whose main 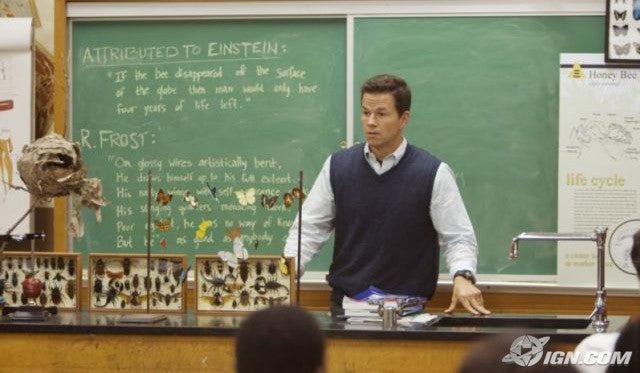 attribute is panic, and only panic. Our hero is a Philadelphia school teacher, Elliot Moore, played totally out of the ’tough guy’ character that Mark Wahlberg is known for playing. Elliot is a man trying to deal with his wife Alma’s (Zooey Deschannel) trust, constantly reassuring his friend Julian (John Lequizamo) that his wife is safe and Julian’s daughter Jess (Ashlyn Sanchez) that her mom is safe. It turns out that he is, along with everyone else, a citizen living in a state of panic just trying really hard to conceal it. All of them are on a train, with other’s who have no clue what is going on, heading for Pennsylvania but there ride comes to a halt when the bizarre evil might be ahead of them and everyone is left stunned because they have no clue what they’re fleeing from.

Maybe the entire East Coast panics because of the infinite number of power plants that puff out black rings of smoke or the fact that we are quick to point the finger at the terrorist attacks that transpired on 9/11, which we still aren’t able to shake. Then there is the issue of blaming everything that happens on the government or heck, even saying “the president planned these attacks.” Each one of these issues are exploited and while Shyamalan never really sides with a certain one he makes us feel that it can be everything.

This may not be the conventional summer film people are looking for but it does contain the most indestructible villain this summer and the anecdote to heavily drenched CGI films. The landscape, which is captured so beautifully by Shyamalan, is a character in and of itself as our characters try to escape its sterile, barren and windswept surroundings. The scares and chills come in in these terms and the terms of the camera panning closely to a character’s blank expression and how people effected with the evil are drawn to just kill themselves. It’s almost as if the victims are saying “I’m fed up with the world and I’m not going to take it anymore!” The world may just be saying the same thing. This maybe Shyamalan’s only movie that can in fact happen. “The Happening” doesn’t make you ask the question: can this happen, but makes you ask: when is this going to happen?
Posted by David Dominic DiMichele at 6:18 AM