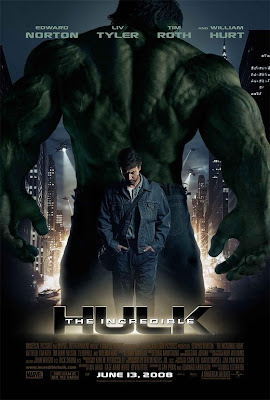 Plot: Fugitive Dr. Bruce Banner must utilize the genetic accident that transforms him into a giant, rampaging hulk to stop a former soldier that purposely becomes an even more dangerous version.

My Thoughts: Finally Marvel has seen the error in their ways. For well over 30 years Marvel Enterprise has been producing and creating adaptations of their comics from book to live action, but none of which has ever been able to grasp the very essences or sometimes the magic that the book held, there have been a few exceptions though that may not capture the full trueness of the comic but still remained worthy on the big screen (Spider-Man, Spider-Man 2, X-Men, X-Men 2: X-Men United) but still the big problem that all these Marvel heroes tend to have on the big screen remained the same, they were not under Marvel’s full control, and therefore could not be made by the right people who’d know how to give these superheroes the justice they rightfully deserve, one of the biggest disappointments for me (aside from Elektra, which I hold as the worst comic book film ever!) was Ang Lee’s Hulk, which I had find to be a snooze-fest and taking itself way too seriously, after viewing it I had lost all hope in the Hulk franchise, and a part of me was disappointed in Marvel Enterprise overall for allowing such a horrible thing to happen to one of their heavy hitters in the mainstream comic world.

That is of course until I heard about a Hulk reboot, much in the

Batman Begins was to its franchise. I must say that I had mix feeling toward it, because I was happy to hear it may have another chance at being done right, and then I felt it may be a little too soon for a reboot Hulk film, because after all the Batman franchise waited eight years before a proper reboot was done, as where Hulk got barely five, and if you ask me five years is hardly enough for the general public to just forgive and forget, and even though I had my socks rocked off me by Iron Man I still had great doubt about The Incredible Hulk and went into it already with some feeling of disappointment coming my way, but what I got was FANTASTIC! It was everything I dreamed a Hulk film should be and more that I sat forward in my seat the whole way awaiting every minute wowed in awe of how enjoyable it was, director Louis Leterrier puts hope back into me for the Hulk, and Marvel Enterprise has pulled themselves out of the rubble this year and showed the all mistakes deserve a second chance to correct themselves.

The action was fantastic, not to overdone while at the same time not too underused, it was just

right, the special effects was outstanding, much better than I ever expected to be, and the design of the Hulk himself was downright breathtaking I was just blown away by how he was visually it defiantly puts Ang Lee’s Hulk design to sham, the sound effects were great, and the cinematography was spot on, in my opinion a movie’s cinematography is one of the most important things, because in a film each and every scene must also tells a small part of the story on its own, and with the right eye behind the camera a masterpiece can be made on looks alone, and as for the plot, it was fantastically done right this time around. Also the CGI done on the Hulk is impressive, he’s more smaller than the last film, but and much darker looking, as well as a darker shade of green, and unlike the other film he does show true anger which wasn’t really expressed all that well in the last Hulk film, I hate to compare both films together because they are both really different, but it certainly puts Ang Lee’s Hulk to sham.

overusing dialogue that’s only there to past the time, and it certainly doesn’t try to complicate the audience with a silly subplot within a subplot method, and it skips the whole slow and boring origins plot and goes right into the middle of the story with Banner already the Hulk, now don’t you worry because you wont of course be confused or anything because the movie does in fact gives you a quick rundown on his origins at the beginning and does so in a respectable manner, also even though it’s not an origins story for the Hulk, the film however does serve to be a somewhat origins story for Tim Roth’s character, Emil Blonsky AKA The Abomination, it shows as he starts off as a damn good solder with a somewhat violent attitude who’s always looking for the greatest challenge for his highly trained skills, slowly by slowly throw greed of power he becomes something entirely different, he becomes one of the Hulks worst villains, The Abomination. The movie pays homage greatly to the 1970’s T.V. show with some dialogue reference and a cameo done by Lou Ferrigno who played the Hulk back in the 70’s, and even the original T.V. score is played throughout the film.

and Betty Ross which I found to be greatly pleasing because last time (the last Hulk film) it was a complete disaster, and the integrity and intelligence still remains strong, many people feared (me included) that to make this more action packed they would have to dumb down the plot, but this was not the case as it remained as intelligent as ever, while keeping it incredibly entertaining, overall this was a fantastic time at the movies, and I like how they throw in a few hints here and there to both The Avengers movie pan down for summer 2011, and to a possible Hulk sequel, it was almost as if one of my issues of The Incredible Hulk was coming to life right before my very eyes. My only disappointment with the film is the film on a few occasions tries to throw some humor into the mix as an attempt to lighten the mood of the film, which works on a certain degree, but one scene in particular showing Bruce Banner and Betty Ross in a cab together while the cap driver is speeding real fast, showing Betty losing her cool to the driver while Bruce tries to come her down. The scene was funny, but felt out of place with the film overall, frankly the film could have done without the scene.

The story is about a few years has pass since Dr. Bruce Banner’s (Norton) accident with gamma

radiation that transforms him into the “Hulk” forced to live a life of solitude from the love of his life Betty Ross (Tyler) he works night and day trying to figure out a cure for his problem and must remain hidden for Betty’s father General. Thaddeus 'Thunderbolt' Ross (Hurt) who believes that Banner is nothing more than US military and will make way for whole new form military weaponry; to help him catch the Hulk the general hires Emil Blonsky (Roth), a British mercenary who witnesses what the Hulk is capable of and admittedly becomes obsess with taking down Banner, so much that he willingly volunteers to become a guinea pig for the military’s Super Solder project which was started in WWII, Blonsky become more powerful than he ever was, and becomes a formative foe to the Hulk, but as time goes by and Bruce Banner escaping the might of the US military, both general Ross and Blonsky become greedy and continue his super solder treatment, which begins to show a sinister side effect that will face off with the Hulk in a climax battle of the monsters.

As for the acting: Edward Norton was breathtaking, he has proven time and time again that he

can fit in just about any role you dare him with, may it the hero or the villain, he can do it, may it be low budget or big budget he can do it, now there was some skepticism by critics about rather or not Norton was a wise choice for the role of banner, I myself even held disbelief and spoke out against the idea of Mr. Norton starring in it, however I was wrong, he gives the character the emotional and intellectual skill which was missing from the last film, and him alone saves the Hulk from the watery grave that it was dropped into in 2003. I hope to see Mr. Norton in a possible sequel or if not than the avenger’s movie. Liv Tyler was magnificent I really enjoyed her performance as Betty Ross, more so than Jennifer Connelly’s in 2003, however I did feel that Tyler didn’t quite do the female scientist role all that well, but she did however show an incredibly strong on screen romance alongside Norton which worked perfectly, one scene in particular involves her and Norton running into each other’s arms gripping each other so tightly that it becomes clear that they to not one to lose each other again, that and so many other scenes like it makes up greatly for her poorness as a scientist. Tim Roth is brilliant; he does the role of the villain so good that I honestly can’t see anyone else playing the part.

William Hurt is outstanding, many of you know how much I enjoy Hurt’s acting, and to be honest

I at first didn’t think he could be up for the task of playing general Ross, however I was wrong, and thanks goodness for it too. Tim Blake Nelson was not so bad, I will say I didn’t care for him playing the role of Samuel Sterns, for those of you who don’t know who Samuel Sterns is, in the comic he is one of the Hulk’s big time villains known as “The Leader” and the way the film presence him is clear hint that he may very well be the next major villain for the Hulk to go up against if a sequel is made. Peter Mensah does pretty good acting alongside Hurt, and the two of them prove to be a nice compo. Lou Ferrigno does a nice cameo to pay homage to his character from the 70’s TV series, I also found it funny that he plays a Security Guard in this when he in fact played one in the 2003 version, coincidence?, also I must give him kudos for dunning the voice of the Hulk, which I didn’t even know until I did a bit of research. Hulk creator, Stan Lee has a small role in the film, so look out for that. And last but certainly not least. Robert Downey Jr. reprises his role as Tony Stark, in a very short, but pleasing cameo, letting everyone know that both films exist in the same universe, and pretty much tells us straight out that there is going to be an Avengers movie.

Final Say: This was a very enjoyable film, and it may not have been as good as Iron Man was, it still is a fantastic film, and certainly worth viewing in theaters, I look forward to a sequel or if not than Avengers movie, whichever comes first, either way I hope Mr. Norton stays on. I highly recommend it.

Copyright 2008 TCWreviews.com
All Rights Reserved
Posted by Clifford Kiyabu at 5:37 AM