Review: Walk All Over Me (2007) [Reviewed By Clifford Kiyabu] 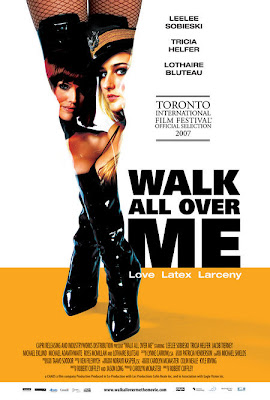 somewhat disappointed, I mean I sis enjoy myself, but there was just something missing from the film, it lacked heart in many ways, in a movie we are usually made to love or hate the main characters of the film, however in this movie you don’t really feel anything for them, for one thing we are made to feel sad for Leelee Sobieski’s character ‘Alberta’, how can one feel one bit of sympathy for this character when in the very beginning of the film she runs away from her hometown because she forgot to give to deliver the money her Boyfriends give her to pay back some men, and by forgetting she runs away leaving him to pay for her mistake?

sympathy, like I said, it lacks heart. The film begins with much ambition but never quite comes through in the end leaving many things unanswered and much holes in the plot, the film is so mediocre that by the time you reach the end of the film you’ll already begin to forget some of the key elements to the film, which is very much a negative in my belief as a film critic, a good film will remain with you for days after viewing, and if it’s really good then it will stay with you forever. But aside from all the negativity I’ve been giving the film I will say that it has its moments where you can’t feel hope for the film and start to get into it, but like I said it is only hope, also the film does have a few good laughs in it, which in some odd degree is the only real parts I can honestly say I enjoyed. Aside from that the film is very moderate and nothing that will WOW you.

The story is about, Alberta (S 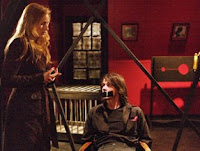 obieski) a young naive girl who works as a convenient store clerk, after her boyfriend gives her the smallest task as to give her boss the money that is owed to him (this part of the story is never explained) she screws up and losses the money, terrified at what she had just done she runs away to Vancouver to her friend who also babysit her as a child. Celene (Helfer), to her surprise she finds out that her once babysitter is now a full time Dominatrix who gets paid well. Now living with her she tries to make it on her own as a cashier at a grocery store, as she tries to pay back her roommate for taking her in, she begins to find it’s not as easy as she thought it would be living in the big city, out of ideas she turns to desperation and pretends to be her roommate Celene for a young guy who is new to the whole domination thing, at first it seems harmless but what Alberta will soon find out his the young man is in a bit of problem with the wrong crowd who believes he stole half a million dollars from them, now she is stuck with more problems than she had to begin with, and not so sure how to fix it all.

As for the acting: Leelee Sobieski was very disappointing, she has been acting for a very long

time, heck since she was a kid, we all remember her outstanding performance at age 15 in Deep Impact and was even fairly enjoyable in Joy Ride, as an actress she showed great potential, however it sadden me to see all that I saw was possible in the past, was not visibly showing in this film, I found her performance to be somewhat dry and a little forced on many occasions, it seems as though she was unsure of herself in the part, which I would have accepted since she is playing a young naive girl, but the thing is even after she as they say Mans up to the situation and becomes a strong Dominatrix like her roommate, she clearly shows the unsureness on her face which just didn’t have at the slightest bit convinced. As for Tricia Helfer, she did surprisingly well, I must admit she really did a fantastic performance, she also matched the part of playing a Dominatrix, you could say she dominated it! [Laughs]. As for Lothaire Bluteau who plays the bad guy “Rene” he did an okay job, but it’s certainly nothing that I could say would make him a memorable villain, just like the film his performance was quite mediocre. As for Michael Eklund, his proformance came on a bit too strong and ended up feeling quite fake, I was not feeling the energy he was giving off on screen as the out of control henchman. Jacob Tierney’s performance was rather cheesy and somewhat embarrassing to watch, it’s a good thing his character spends most this film unconscious. Otherwise I’d be even more disappointed. Michael Adamthwaite give a pretty good performance, he gives off a natural energy that makes you want to hate him, which is what his role is basically there for.

Finale say: Over all the film was way too soft and on the weak side to what was advertised to me, it was okay, but nowhere near as I thought it was going to be, I feel if the film was sold to its audience another why it could have been a more enjoyable film and maybe a funner time viewing. Perhaps one day I’ll have second thoughts on the film, but until that day comes I stand by my rating.
TCW
© The Comic Whore 2008
Posted by Clifford Kiyabu at 6:21 AM