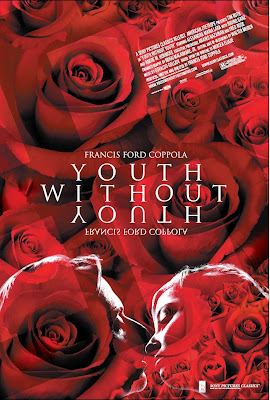 Plot: A love story wrapped in a mystery. Set in Europe before WWII, a timid professor is changed by a cataclysmic event and explores the mysteries of life.

My Thoughts: Master filmmaker Francis Ford Coppola has bought us such magnificent films throughout the years, such films as; The Godfather (1972), The Godfather: Part II (1974), Apocalypse Now (1979), The Godfather: Part III (1990), and Dracula (1992). With such wonders as these he has proven to be a remarkable filmmaker, an artist of the arts some would say, but that not to say he’s a perfect filmmaker, after all he also has some real downers in his career, but none of which can out shine his brilliance in movie making, with that said it had really sadden me to see that it has been nearly ten years since his last film (The Rainmaker (1997)) with him in the director’s seat, that is of course until I saw a little known film called Youth Without Youth (2007), a film that was in a very limited release in the US, and was not given the respect it should have gotten from the industry, the film is a very beautiful and remarkable film with a plot which carries depth within depth, and will have you loving every moment of it.

But I must warn you it is not for everyone, the film’s big massage

deals greatly on Nietzsche philosophy, and some will have a hard time to bare with it because of that, but if you are like me a very open-minded critic to the mysteries of our world; then you will not have a single problem with it at all, in fact you will quite enjoy it as I did. The film deals with the choices we make in life and the time we have left to deal with it, but unlike your average film, this one has a twist to filled with mystery that will never quite fully be explained, not to mention it is so incredibly romantic, now before you say anything, YES I love romantic films, I feel that romance in all forms is a beautiful thing between us as human beings, from words we express, to the body language we give off, rightdown to our very touch, romance is one of the few things that we has humans have experienced throughout history, it connects us to past and present and will so forth into the future, romance holds within itself love, hate, strength and weakness, security and insecurity in such a way that it's beyond our comprehension, that is why I love romance.

As for the romance in this story, it certainly doesn’t play a big role, however it does play a role in

it, and it is both beautiful and greatly depressing, some could say it’s paying homage to a William Shakespeare play; filled with so much hopes and dreams but in the end it remains as what it was always meant to be, undeniably tragic, a bittersweet ending you could say, and most of all the cinematography as well as the editing was outstanding, a real eye opener for me, as I loved every minute of it, not to mention the score which was breath taking in such a way it only help add to making this film great. Overall ten years was well worth the wait, I can’t wait to see what Mr. Coppola come up with next!

Dominic Matei (Roth) professor of language and philosophy in the year 1938, contemplates suicide: after the love of his life is dead, and he remains unable to complete his life's work on the origins of language, on the day he is about to kill himself (Easter Sunday) he is struck dead on by lightning and should have died from it, but instead heals quite fast of someone at his age, but to his surprise as well as the doctors who nursed him back to good help, they find out he is no longer the 70 year old man he was before the attack, but now a man in his early 40’s, shocked by this the doctors help hind his from the invading Nazis who have learned of this, as Dominic travels Europe over the years under new various identity he slowly comes to understanding his new found gifts, like the ability to absorb knowledge with a single touch, now some years later, he meets a young woman who has her own passage through a lightning storm and suffers the same fate. Not only does Dominic find love again, but her new abilities hold the key to his research, but the longer he remains with her the faster she ages, he must choose between finishing his work along side her and continue the love they have, or save her by leaving. Is the sweetness of life finally at hand?

As for the acting; Tim Roth was fantastic, he really shows off his talent in this one, he not only

plays the character, he becomes the character and does so in such a manner that we forget that he is an actor and not the man he’s playing on screen, most people who enjoy his talented skills know him for his best work is such films like; Pulp Fiction and Reservoir Dogs, as an actor he gives an energetic charge to just about every film that he’s in, even if the film may or may not suck it still have the part of it that remains excellent. Alexandra Maria Lara was great! I loved her acting in this; both she and Roth share a great on screen chemistry together, Alexandra Pirici was amazingly beautiful; her acting is as outstanding as her beauty which one cannot deny is breath taking all on itself. André Hennicke did a great job playing the part of Josef Rudolf, the Nazi scientist who is hunting Dominic down for studying. Bruno Ganz was fantastic even though he has a sort time on screen. Marcel Iures was also great, he makes another great name added to the cast, his profomace was done spot on. I loved his acting in Goal!, and just the same in this fine film. As for the rest of all the other actors, even though they have much smaller roles in this compared to the ones listed above, they all did their job fantastically. Also I should notify you to look out for a cameo by actor Matt Damon I won’t say where, just look out for him.

Finale say: Youth Without Youth is a profound film which probably won’t ever get the respect or appreciated by a wide audience that it so greatly deserves, because it’s the type of literature that is very special and restrictive (you’ll need to understand Romanian folklore or oriental philosophies in order to get into this type of film or at least be open minded to it). and I will andmit it has some plot holes, however it doesn't ruin the film one bit. Over all I really loved this film and will much like to give this another go around someday. I highly recommend it!
TCW
© The Comic Whore 2008
Posted by Clifford Kiyabu at 5:43 AM