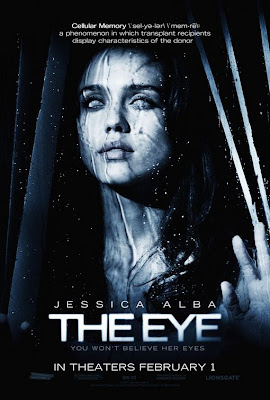 Plot: Sydney Wells is an accomplished concert violinist who has been blind since a childhood tragedy. Sydney undergoes a double corneal transplant, and her sight is restored. But Sydney's happiness is short-lived as unexplainable shadowy and frightening images start to haunt her.

My Thoughts: Visual Sight, one of our main five Senses, many people see eyes as only an organ that produces images to the brain. But in some cultures it is much more than that. In some Asian cultures eyes contains the soul of an individual, in other cultures some believe that eyes can see more than just the visual images that can be seen by the human eye, some believe that there are those who are born with what a “6th Sense” the ability to see into the supernatural world, or in other words Spirits, some say it’s a gift while other say it’s a curse, no matter what it may be, one cannot deny it to be intriguing. I myself has always been somewhat attracted to the mysteries unknown to us, and because of this curiosity I have always enjoyed films that looked into this matter, one in particular was the 2002 Chinese horror film called Gin gwai, the film was an eye opener, and showed a different take on what some take for granted, the film was dramatic on many levels, and as scary as it was, it also had a strong emotional look at death, regret and how the tortured soul is forced to repeat ones death over and over again without finding any rest, this was surely a fantastic film that needed an open mind to Daoism belief (a Chinese religion).

would be remade for its western viewers, which usually consists of putting a big name actor or actress into the film, and throwing a few extra more million dollars into its budget than the original had. And what you get as a finishing product is a cheesy remake that lacks the integrity its Predecessor had. With the 2008 remake The Eye Staring Jessica Alba we get that very thing, the film tries to do a play by play retelling of the original story but at the same time it also tries to bring in its own brand of horror. Problem is the filmmakers try to incorporate one cultures beliefs into another’s, the result is a complete disaster, not to say incorporating different cultures is wrong, I think people understanding others cultures and religious beliefs is great and educational that all should go throw at one point of another in one’s life, however the manner that they try to do it not only doesn’t make but it leaves way too much things in the plot unexplained, not to mention they messed up the two subplots that was in the original Chinese version, I won’t go into details because that would give away too much of the film, but the first subplot is missing parts from it that leaves the viewer asking questions that don’t get answered, meanwhile the second subplot which had a mixture of sympathy, chills and thrills in the original “Gin gwai” is almost cut out completely, and what they do show leaves viewers left with no explanation ever given to them, all and all The Eye was a downright mockery to the original Chinese masterpiece.

ruining this film, they had a chance to do what other filmmakers have failed to do time and time again with remakes, but they ended up relying on cheap thrills that aren't frightening to the mature moviegoer and instead they drop the ball and settled for mediocre, you probably can tell by now that I am not happy with this one. You would too if you saw the something great and original manhandled by someone else and rip-off in such a sad way it’s beyond repair. Oh wait, most of us have seen this happen already, it was called “The Grudge” which was another disaster if I may add. But I won’t go into that because that for another time, also the biggest problem for me was none other than the ending, Problem here is Hollywood: you see the Hollywood machine has this thing about endings, where everything must be fine and dandy, injecting such Idiocy as ”the good guy must always win” or “someone who was weak must find inner strength to save the day!” frankly I’m getting quite tired of this hypocritical ideology that it’s starting to give me a headache every time I see it in mardren day films, sure it’s good to see such Ideals presented in films, however with every single new remake that comes out, You have just got to be kidding me, I’ll make it clear folks, the eye, as well as 90% of every horror remake (Especially those that are based off of Asian horror films) in the last ten years or so haven’t ended the way they are supposed to, instead of giving of the bittersweet ending that’s originally intended, they give us this we beat the odds type of B.S. frankly I’m just tired of it all already.

The story is about Sydney Wells (Alba) a young, blind violinist who is given the chance to see for the first time since childhood through a miraculous corneal transplant. As Sydney adjusts to a dizzying new world of colors and shapes, she is haunted by frightening visions of death itself capturing the doomed and dragging them away from the world of the living. Terrorized and on the brink of insanity, Sydney must discover whose eyes she has inherited, and what secret visions they have held.

As for the acting: Jessica Alba is a smart and beautiful actress that in my opinion

has a lot of potential, however she has yet to really show it, some of it was hinted in the last film I saw her in before this one “Awake” and even in that she showed some potential, but like her other films before it she never quite shines, she gives a somewhat straight to the point style acting that shows no real emotion in her words and a somewhat fake facial expressions that seems like she’s reading her lines off a cue card, I hate to be mean, I really do, but here is a woman who has a chance in this time and point of her career to be a triple threat in Hollywood, but throws it away with half A** acting, I really like her and think she could be great, but she has to do something about her acting skills and soon, because once that pretty young face of hers fall victim to father time, her career will just be another speck of dust in the wind, here today, gone tomorrow. Alessandro Nivola was fantastic, one of the few actors in this film that did exceptionally well, if you’ve seen his other films you’ll know he’s an actor that works hard in becoming the roles he acts in. Parker Posey was okay. I’m going to be honest with you, I am not a fan of her acting, just about every film I seen her in has been disappointing, she’s one of disappointments to “Superman Returns” and she downright irritated the heck out of me in “Blade: Trinity” so I think you understand how I felt about her acting overall in this film, but I will say she at least didn’t irritate me as much in this one, she was a little okay this time around. Fernanda Romero was not at all bad, she was a tiny bit flat, but still showed much potential, I’ll most certainly be looking out for her in future films.

Final Say: Perhaps I was too mean to this film, and didn’t give it a chance, maybe so, but I stand by my word when I say The Eye should have never been remade, or at least not this soon, the original was and still is the better between the two, and if you are interested to watch this film based on its plot, then you should see the original version not this one. But if you still plan on seeing it, than all I can say is watch at your own risk!

Copyright 2008 TCWreviews.com
All Rights Reserved
Posted by Clifford Kiyabu at 5:11 AM