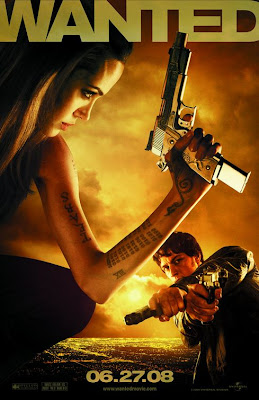 Plot: "Wanted" tells the tale of one apathetic nobody's transformation into an unparalleled enforcer of justice

My Thoughts: It’s said that when you have an extreme adrenaline rush that for a brief moment you see objects move in an entirely slower pace than usual, they say it’s due to the mind being able to comprehend so much information at a time, and when more than it’s normal amount of adrenaline is realest into the body, it causes the mind and body to go through a state of experiencing slow motion in both instinct and reflexes, for some, they can recall things that happened that seemed like minutes, while for others it was only a moment, a great deal of many people have or will experience this phenomena in their lifetime, if not multiple times than at least once.

brand of justice; I must admit despite the fact I’m a comic book loving geek I knew very little about the comic this film was based on, and had to do a little research on it before checking out the film adaptation of the ground breaking six-issue comic book miniseries, I must say that I had very little hope in this film because of two things. The first being the fact the characters in this film differ from how they are presented in the comic book. For example; James McAvoy’s character “Wesley Gibson” original physical appearance in the comic is based on rapper Eminem, while in the movie he looks nothing of the sort, other notable characters who also share this huge difference is; Thomas Kretschmann’s character “Cross” original physical appearance in the comic is based on Tommy Lee Jones, and is only known as “The Killer” in the comic, and Angelina Jolie’s character “Fox” physical appearance in the comic is clearly modeled after actress Halle Berry. And of course, Morgan Freeman’s character “Sloan” in not even in the comic, the second reason is the fact that the plot, as well as the whole film for that matter is loosely based on the comic book miniseries it’s made from, and we all know that anytime a film is loosely based on the work it’s from things never turn out as we hoped it would most of the time.

Well fortunately this is not the case for this film; and even though it does not have the same

drive the comic has, the film works very well solely on its own, and proves to defy even my doubts on it, which I must admire. The plot may not be something you could believe a 100%, but it still proves to be an entertaining film no doubt with some chills and thrills along the way, and a few plot twisting moments that will have your jaw drop, not to mention the film carries nonstop action packed gun fights that will wow any moviegoer to the very least, and fantastic melee fights that is nothing short of amazing, and eye opening CGI and special effects and that is equivalence to the level of orgasmic gratification, I assure you this is one bad boy you won’t want to miss, also the film remind to viewer to not take the film overly serious by throwing in some humor into the mix which in any other case would be a big mistake, however in this rare case it’s spot on. Also the film has a strong presence of bullet time and slow-motion sequences, which again an over use would be disaster, however again this not the case as the film only benefits from the slow motion, showing you how certain of the characters ether got out of a mess or manage to kill its target. And of course the cinematography is just. WOW! Purely enjoyable to the very last clip, it gives the viewers the very insight that most films don’t show you in a typical gun fight which is very gratifying. And the score which is don completely by master composer Danny Elfman is breath taking, the music alone sums up the entire film by just one listen, director Timur Bekmambetov the brilliant filmmaker behind Night Watch and it’s fantastic sequel Day Watch with writers Michael Brandt and Derek Haas the two men behind 2007’s 3:10 to Yuma comes this titillating joyride of a film that never lets up, not for a single moment which will give viewers all around far more than their money’s worth, and is even worth a second viewing in theaters.

unparalleled enforcer of justice. In 2008, we're introduced to a hero for a new generation: 25 year old employed slacker, Wesley Gibson (McAvoy) an office worker who is best known as a pushover by his boss who chews him out hourly for lacking in work productivity, his girlfriend ignores him routinely and is cheating on him with his best friend, and his life plods on in interminable boredom and routine. Everyone knows this disengaged slacker will amount to absolutely nothing, and so does he, until he meets Fox (Jolie), and then everything changes. Wes' estranged father is murdered, and the deadly Fox recruits him into The Fraternity, a secret society that trains him to avenge his father's death, by unlocking his dormant powers, as she teaches Wes how to develop his lightning-quick reflexes and phenomenal agility, he discovers that The Fraternity lives by an ancient, unbreakable code: to carry out the death orders given by emotionless Fate itself. Wes, with his tutor and the paternal guidance of The Fraternity's enigmatic leader, Sloan (Freeman), as he grows to enjoy all the strength and success he ever wanted. Slowly he realizes there's more to his dangerous associates than meets the eye. And, as he wavers between new found heroism and vengeance, Wes will come to learn what no one can ever teach him; that he alone controls his destiny, and he alone must decide what is right, and what is wrong.

As for the acting: James McAvoy was fantastic, he gave the main character “Wesley Gibson” the

justice that was needed for the role, he also gave the character a bit of his own personality which is spot on for the role. Angelina Jolie was great; her acting was a outstanding as is her beauty, which I need not remain you is, as the saying goes, “If looks could kill”. However I will say I have but one small complaint with her, Jolie in my opinion is starting to get a bit too skinny, not to say skinny, it’s just here appearance is starting to look a tad bit unhealthy, which was somewhat of a concern to me while watching this. Morgan Freeman was brilliant! I said it once I’ll say it again, the man has yet to disappoint me, even in the most horrible of films his presence manages to give any film a little hope, and his name added to an already fantastic film just made it even greater. Terence Stamp does a great job in this, much like Mr. Freeman, he is a veteran actor, but in his case he doesn’t get the proper appreciation that is owed to him in this business. Thomas Kretschmann was great; I very much enjoyed seeing him playing the role of “Cross”. Common was also somewhat good, I will say I don’t find him all that interesting as an actor due to the fact he has yet to show me a truly good performance to respectively call him an actor, however I will say that out of all his performances this would be the best one yet. Dato Bakhtadze did a pretty good job, I must say I was very impressed with his performance as “The Butcher” he gave the role that extra ingredient that was needed to make it work, plus seeing him fight towards the end of the film was fantastic and extremely thrillingly fun to watch. Konstantin Khabensky did a nice job in this, I must say, it was very nice to see one of the Night Watch stars making it into this film.

Final Say: was a very enjoyable film for me, and so far is among my top movies seen in 08, and surprised me, this is one film you must not miss, even if you don’t care for film like this you should still give it a shot, you may be as surprised as I was. If I have a chance I will defiantly give this movie a second viewing while it’s still in theaters, I highly recommend it!

Copyright 2008 TCWreviews.com
All Rights Reserved
Posted by Clifford Kiyabu at 5:33 AM