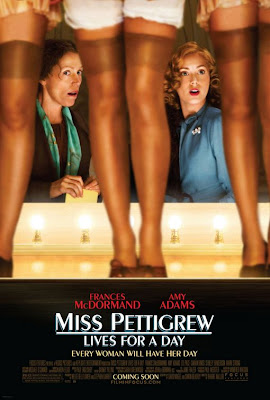 Plot: Guinevere Pettigrew, a middle-aged London governess, finds herself unfairly dismissed from her job. An attempt to gain new employment catapults her into the glamorous world and dizzying social whirl of an American actress and singer, Delysia Lafosse.

My Thoughts: Based off the 1938 British novel written by Winifred Watson, Miss Pettigrew Lives For A Day is a deliciously delightful comedy about a about taking risks, and enjoying what life gives out in the moment. To be completely honest I’ve never read the book so there is no way possible that I can compare them together, however I can say from my experience from watching the theatrical adaption of this wonderful story was nothing short of brilliances, I can only imagine how even more better the book will be, the movie is basically about one day in the life of Guinevere Pettigrew (McDormand) a woman who has always lived at the edge of total poverty most of her life, and on one particular day when her luck had struck to its lowest point she acted out of her usual self and portended to be something she wasn’t, this of course set the film’s comedic and adventurist plot in motion for an exciting thrill ride, but as much as there is laughter in this film there is also a very valuable lesson to be learned as well, that when it comes to love you must chose what’s in your heart, and not what’s in your mind because in many cases the two can be very much different things. 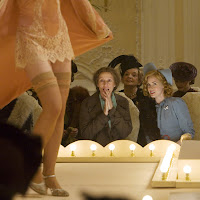 s I’ve stated already, I’ve never read the book this film is based off of, but I very much enjoyed the film, and as we all know the book is always a hundred times better then the film, so I’m assuming if I really liked the film then I will love the book even more, now was there problems in the film? Yes, did it ruin the film in any way? No. the film is in some parts hard to fallow due to it being based on a signal day and there is just so much going on with these characters that can make one feel somewhat exhausted , but then again isn’t that how life is? Anyways there isn’t much character development going on here, but again this film is only about one single day and not a life time so characters development would be pretty pointless for a film such like this, and even though there isn’t much development going on in this flick, you still feel as though you’ve known these characters your entire life. Also the overall back setting to this film was spot on with a very authentic 1930’s Fashion London era which of course also gives the film this light tone to the ever so depressing WII era which was sweeping all of Europe and quickly approaching the borders of the United Kingdom at an incredibly fast rate, one could say that the over tone to the film presented itself as the calm before the storm. The film shows both the humor to the story’s plot as well as the drama of the war nearing soon, but of course talks of the war does not play a big role in the film, more like hints and small talk here and there is all.

But all of this of course is all thanks to director Bharat Nalluri, a British director whom I c

an’t help but say was perfect for the job, giving the film just the right touch to make it a very enjoyable film all around. Sadly there are some flaws; one in particular lies in the plot which lacks direction at times, there are times in the film where there are just so many things going on at once it can be heard to keep track, this could partly be blamed on director Bharat Nalluri part, and even though I had just given him a high praise on his directing style no film is flawless, and in all cases it will either be the director’s fault or the actor, either way there will always be a fault, you just have to look out for them, but aside from this little problem, the film was a lavish delight, a pleasure for any moviegoer looking for some good old fashion light hearted romantic comedy that will put a smile on your face. Overall I had a great time with this film, to rare is it that we see a film like Miss Pettigrew to come along and do what it manages to do in its genre, and when one such as this dose come around we must seize the moment and enjoy every bit of it.

about; In 1939 London, Miss Guinevere Pettigrew is a middle-aged governess who finds herself once again unfairly dismissed from her job. Without so much as severance pay, Miss Pettigrew realizes that she must--for the first time in two decades--seize the day. This she does, by intercepting an employment assignment outside of her comfort level--as "social secretary." Arriving at a penthouse apartment for the interview, Miss Pettigrew is catapulted into the glamorous world and dizzying social whirl of an American actress and singer, Delysia Lafosse. Within minutes, Miss Pettigrew finds herself swept into a heady high-society milieu--and, within hours, living it up. Taking the "social secretary" designation to heart, she tries to help her new friend Delysia navigate a love life and career, both of which are complicated by the three men in Delysia's orbit; devoted pianist Michael, intimidating nightclub owner Nick, and impressionable junior impresario Phil. Miss Pettigrew herself is blushingly drawn to the gallant Joe, a successful designer who is tenuously engaged to haughty fashion maven Edythe--the one person who senses that the new "social secretary" may be out of her element, and schemes to undermine her. Over the next 24 hours, Guinevere and Delysia will empower each other to discover their romantic destinies.

As for the acting; Frances McDormand was outstanding, she’s an Oscar worthy actre

ss that gives us nothing short of an Oscar worthy performance. Amy Adams was breath taking, she alone steals the show as Delysia Lafosse, her performance came natural and matched the era of the film spot on, and her attitude is just downright irresistible, I couldn’t imagine anyone else playing the part as great as her. Shirley Henderson did a marvelous job as Edythe Dubarry, much like Adams; she too gives off a charismatic performance that matches the times the film is set in. Lee Pace did a fine job, although I felt it could have done a little better, at time his performance was lacking and a little off key, but that’s just my opinion. Mark Strong did a great job, he in some why (more than others) plays the story’s villain and he does a great job in doing so. Tom Payne is…. Ok in a way, I feel as though he wasn’t picked for the role of Phil for his acting qualities but rather for his looks, because I honestly felt nothing from his performance but someone who’s there as eye candy for the ladies to look at, and yeah, the female audience could argue with me that Amy Adams showing off her nearly perfect figure (And what a beauty it is I might add) is the same equivalence to what Mr. Payne does for the female audience, that’s true, but there’s one difference that separates them, Adams can actually hold her own ground on camera as where Payne cannot. Ciarán Hinds was magnificent; he’s one of the best actors in his class, there isn’t a film or show that he’s done that I don’t like. He gives a strong performance in each of the roles he plays, and his presence can always be felt in a film.

Final Say: Miss Pettigrew Lives for a Day was a very enjoyable film, it gives its viewers a fine combination of an old fashion screwball comedy meets a classy romance tale which hasn’t been seen often enough these days, the film is a true class act for it’s fine qualities despite its few flaws and is recommended for anyone who wants to curl up next to that special someone of theirs and enjoy a magical evening of lighthearted humor that is Miss Pettigrew Lives for a Day. I recommend it!
Copyright 2009 TCWreviews.com
All Rights Reserved
Posted by Clifford Kiyabu at 3:15 AM