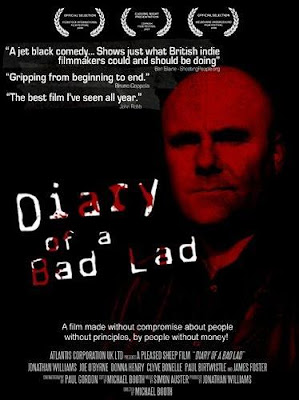 Plot: Frustrated filmmaker, Barry Lick, sets out to attempt to make a documentary about a local businessman who he believes is involved in property rackets, prostitution, pornography and the importation of large quantities of recreational drugs.

The Story is about: A film about frustrated filmmaker Barry Licks attempts to make a documentary about a businessman, who he believes is involved in property rackets, prostitution, pornography, and the importation of recreational drugs. For security reasons Barry never uses his real name, and calls him Ray Topham. Barry recruits a team of young wannabees. Their quest leads them to two of Ray’s associates; a local cocaine supplier and ex-S&M porn actress called Joanne Miller, and the charmingly psychopathic Tommy Morghen who acts as Ray’s personal security consultant. They soon realize that Barry is out of his depth, and so they exploit him for their own purposes with both hilarious and tragic results. Diary of a Bad Lad explores themes of sex, drugs, violence, exploitation, and the desperate limits that people will go to in order to make a film.

My Thoughts: Are some people born… bad? These are the type of things I think about when the night strays off into the early morning hours, when my mind often wonders into the unknown, and while I will normally come up with a simple answer (Or simply make one up, whichever I prefer better) for most of the crazy things running in my noggin, I’ve always wondered, are there people who are just simply bad? The best answer I could possible come up with is yes, and no, of course. While I may believe that some people are simply bad by default, some are good people, quite good in fact who, put into the right circumstances in the right moment in time, can be corrupted into doing just about anything, including bad things; does this make them a bad person? No… does it make them cynical and easily corruptible? You betcha! 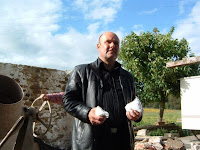 eady know, it’s no lie that I’m a hug supporter of the indie arts, aside from being a pretty big fan of international films of course (because mainstream doesn’t seem to cut it anymore in the originality department now days.) So when I received in the mail a screener of the indie film Diary of a Bad Lad, which was sent to me by the good boys at Pleased Sheep Films over in the United Kingdom, I was thrilled to hear I’d be reviewing a film that is categorized in two of my favorite genres, because most of the film that hit’s the states that is from Europe can hardly be categorized as “Indie”, when a low budget film here in the US is easily considered big budget in some countries, so when I heard that an actual low budget indie film was hitting my neck of the woods my first reaction was purely shock and joy because this was a rare case indeed. Well, after finally watching it what can I say, other than the fact it was an incredible film that proved to be very satisfactory: Well for starters the film was a real eye opener for me, because the film projects a surreal sense of the real world in the form of a mock-doc, which symbolizes the dark and gritty world that is all around us without us knowing half the time, things that are actually going on in the world this very minute. The dark and the gritty things people take for granted now days lurking all around us that is the criminal underworld, thinking to themselves that this type of stuff couldn’t possibly happen to me, I’m out of the clear because I live in a good neighborhood, but you’re wrong, you’re never really out of the clear. Because just as the film shows, corruption and greed is everywhere especially in the least place you’d ever expect it. With a face to the gutter sense of dark humor that can only be compared as wickedly sinister with a lovely dash of black comedy. What makes Diary of a Bad Lad such an interesting piece is the fact that this film was made with the idea of being as realistically as possible so that it would blur the lines between fiction and non-fiction. And to that extent, I found myself so deeply engaged into the film’s plot that I at more than one occasion completely forgot I was watching a movie that plays out as a documentary and not an actual documentary. 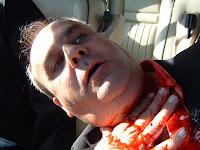 een overly done in the wake of the post-Blear witch project, Diary of a Bad Lad still manages to take an idea that’s been passed around more times than a groupie at a Rolling Stones concert and made it feel fresh and new again. Now that doesn’t without saying the film is perfect and flawless, because the film does in fact have its fair share of problems that did knock it down a notch or two for me. One of the problems was that, the film fallows Barry Lick (Played by Jonathan Williams) and his team of amateur filmmakers on their journey to expose the truth behind a criminal master mind that they refuse to mention by his real name and only call by a nickname which is “Ray Topham” (Played by Tom Miller). The problem is in the film they mainly go through Ray’s personal security consultant Tommy Morghen (Played by Joe O'Byrne) and an ex-S&M porn star named Joanne Miller (Played by Donna Henry) for the material they need for their documentary, the problem I had was that my understanding while watching the film was that Tommy Morghen is the main focus of the plot since he seems to be the one with the most answers, and yet I felt there simply wasn’t enough time devoted to him and instead focused on other things that wasn’t all that necessary. One scene particular that did this was the scene where Joanne invites Barry and his team over for a brief interview over her place, there wasn’t anything wrong with showing the scene as it did help develop the characters into a more three dimensional stat, but I felt that the scene ran over stayed it’s welcome after awhile and felt like it should have been cut a bit shorter. The other problem was, well it’s certainly not a problem for me, but certainly a problem for those who aren’t educated in British “slang”. Like all countries, each nation and culture has its own set of slangs that many won’t have a clue the meaning is. for example: if you where to take offense because someone walked up to you and asked if you had a fag they could bum off you, than obviously you don’t know what the question they had ask you, which means you’re even more likely not to understand half of what’s said in this film.

As for the act 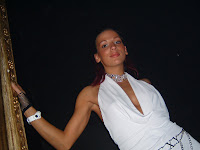 ing: the acting was very decent and very believable, aside from one cast member which didn’t bold well for me I found the acting in general to be the center piece of the film because it hold a very strong sense of realism that looks and feels authentic at times. Jonathan Williams did a fine job in his role, and narrating of “Barry Lick”. His portrayal of the character was humorous and yet entertainingly informative, one could easily argue that his portrayal was almost like watching a British version of Michael Moore but in an entertaining way and certainly not annoying. Joe O'Byrne and Tom Miller did fantastic jobs in the roles of “Tommy Morghen” and “Ray Topham”, they give the right amount of arrogance and “street-smart” attitude to the characters that it comes off feeling very authentic. Donna Henry and Roxanne Gregory were great as “Joanne Miller” and “Roxy”, Roxanne did a fine job in making her character come off looking and feeling young and innocently naïve, which works perfectly well for the film. Of all the actresses in this film, Donna Henry is the one that really stood out for me, because her performance was strong and demanded attention whenever shown on screen. The one performance I didn’t care for in this film was none other than Paul Birtwistle, who plays the part of “Birty”. I didn’t care for his acting and found him to be generally annoying. Nothing against the actor in particular because I’m pretty sure he’s nice down to earth fellow in real life, but onscreen I honestly did not care of his character in the slightest bit. Like I’ve said, the cast in general is fairly decent, and each and every person, no matter how small has something to contribute to the film.

Final Say: Diary of a Bad Lad was a very interesting film to watch, mainly because it’s dark and witty sense of humor grows on you with time, and though the film does have its problems, it doesn’t hurt the film significantly enough, but instead end up being a thought provoking film instead. Like a find wine, the film will begin to show its self worth with time, and though its bitter flavor is not for everyone, it’s an acquired taste that will gain a cult fallowing in no time. Over all the film is something to look into, if only the reason is to see what all the fuss is about.

Copyright 2009 TCWreviews.com
All Rights Reserved
Posted by Clifford Kiyabu at 5:34 AM