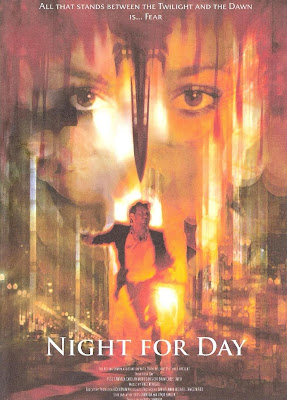 Plot: A musician must break free from the secret, occult underworld society of sex, murder, and blood addiction he is tied to and survive the night in order to get to the woman he loves by sunrise.

My Thoughts: There has always been an intense fascination for wanting to know the unknown among people. This fascination has embedded itself through all cultures going back hundreds of years in the form of folklore, one of these folklores is none other than vampirism, though not originally called that there is no looking at it any other way that man has been fascinated by the concept of a person or being who is able to live off another living being to survive, and one cannot deny that in most recent times (Particularly the last hundred years) vampires have made a hug impact on our society through all mediums.

Night For Day is a i 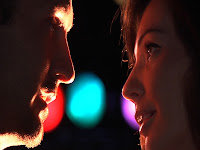 ntriguing film about a vampire who has lived a life filled with regret and guilt, and has given up on his old lifestyle to find that one thing missing in his life which is love. Actor Russ Camarda who is the writer and director of Night For Day brings forth a tale which is compassionate as well as empathetic. And oddly enough could be called a 'Twilight' for adults. Of course it has a much much lower budget, and maybe not at all the same as nor alike, except for the film having a few similarities with the concept such as a male vampire who has fallen deeply in love for a human and is trying to break free from his past life for a new one but to do so he must first survive the night so that he can be with his true love at sunrise. The film goes completely against the very mythology of the vampire and does a little rewriting of its own, though I will say that Camarda takes a bold risk in doing this, some may like it and some won’t, however way you view it I highly respect him as a filmmaker for doing that, on a plus note by taking a different route on the mythology the film expresses that even in the vampire world they too have superstitions and wives tales to fear, and though not quite in tuned to its big budget competitors it does manage to come out satisfactory, the plot is indeed a pleasure, it sparked my curiosity and kept me interested most of the time. Filed with a few chills and thrills along the way, this sexy of a vampire flick has some very good qualities to contribute to its viewers while at the same time a few miner cons. unlike being a another typical horror film it has a great plot which is in a way told straight from the heart sort of speak, if you were to strip away the vampire part in the plot you’d get a depressing but compelling movie of revenge and trying to fine closure. The pacing goes quite well, though I do wish that the film was a bit longer because there was some stuff left unanswered which I really wished wasn’t. I also would have liked to see more back story development in the film, either way it’s still a film worth looking into.

The story is about: Vincent a guitar player who is entwined with the underworld society of sex, murder and a blood addiction that has sustained him for more than a lifetime, Vincent meets Laura, a beautiful, young woman, unlike any he has ever met. She doesn't know the reality of his deadly secret life and offers him love for the first time. For once, Vincent realizes he can choose his destiny. Laura's chance at a "normal" life waits for Vincent at daybreak but he will have to survive the twilight to reach the dawn where his true love awaits.

As for the acting: Russ Camarda did a fantastic job as Vincent, as both an actor and director he knows exactly what he wants for the role and does a pretty spot on job doing it. Carolyn Morrison was quite lovely in the role of Laura, she and Camarda has a fairly decent on-camera chemistry going for them which was enjoyable. Vicki Baum who plays the film’s anti-heroine/Villain gave a bold performance, and though many may come to dislike her character, you can’t help but empathize with her on the notion of wanting to avenge someone she loved dearly. Christopher Robert Smith who plays the vampire Derrick gave a somewhat stale performance, it’s not that he wasn’t trying he just tried too hard and ended up coming out outrageously cheesy in the end. Dan Brennan gave a pretty good performance as Jimmy Ward the night club owner who he and Vincent has this love hate friendship going on, he likes the guy as dear friend but hate that he can’t commit to showing up on time for work. The rest of the cast does a fairly good job in the film but I see no real reason to mention any of them due to the fact that the story does not focus on them..

Final Say: Night For Day was a very enjoyable film to see, though I do admit the film had some problems in it I still had a good time with it, director Russ Camarda not only does a great job in making this film a pleasure to enjoy, but he does so in the manner that will have some wanting more. I recommend it!
Copyright 2009 TCWreviews.com
All Rights Reserved
Posted by Clifford Kiyabu at 5:59 PM