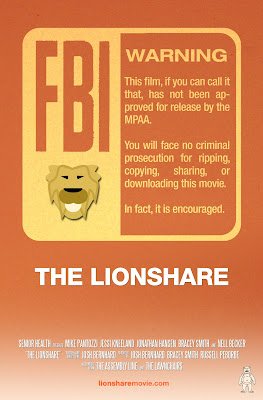 Plot: A young filmmaker who’s struggling with finding his center in life joins a secret torrent site called ‘thelionshare.com’ after being introduced to the website by a girl he has feelings for.

The Story is about: Nick (Mike Pantozzi) a young filmmaker who’s struggling with finding his center in life, after meeting Eva (Jessi Kneeland) a woman he befriended online, they decide to have what started out to be an innocent first date, but soon erupted into a night of steamy pleasure that Nick won’t soon forget. After their night of fun, Eva invites Nick to join a secret torrent site called ‘thelionshare.com’, where he can download movies and music from bands and artist that many don’t even know about (such as the band constantly talked about in the film called Applecurry), as nick eagerly await his second date with Eva, we see his feeling for her grow stronger as well as his addiction for the torrent site grows more sporadic, we also see the complex lives of nick’s friends, Matty (Jonathan Hansen) and Bracey (Bracey Smith) Matty is dealing with issues surrounding the relationship of him and his father, while Bracey is struggling to get his music out there to the public.

My Thoughts: Being a film critic has given me the opportunity to experience an adventure of films I highly anticipated and films I’ve never even heard of before, though I admit; some films are just simply not worth watching, however taking in both the good as well as the bad is all in a day’s work when setting off on a journey into the world of cinema, and sometimes when venturing into the unknown I come across what I like to call a ‘gem’ of movie, these don’t come by so often now days, and when one such as myself does in fact encounter such a rare treat, it should be treated as a diamond in the rough that one shouldn’t ever pass up on, and trust me when I say that it’s more than a fact, it’s a BEAR FACT! (You probably didn’t get the pun but don’t worry, it’s an inside joke from the film which is thrown around quite a few times)
Posted by Clifford Kiyabu at 6:35 AM