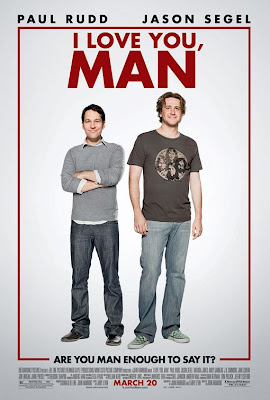 Plot: Friendless Peter Klaven goes on a series of man-dates to find a Best Man for his wedding. But when his insta-bond with his new B.F.F. puts a strain on his relationship with his fiancée, can the trio learn to live happily ever after?

The Story is about: Peter Klaven is a successful real estate agent who, upon getting engaged to the woman of his dreams, Zooey, discovers, to his dismay and chagrin, that he has no male friend close enough to serve as his Best Man. Peter immediately sets out to rectify the situation, embarking on a series of bizarre and awkward "man-dates," before meeting Sydney Fife, a charming, opinionated man with whom he instantly bonds. But the closer the two men get, the more Peter's relationship with Zooey suffers, ultimately forcing him to choose between his fiancée and his new found "bro," in a story that comically explores what it truly means to be a "friend."

My Thoughts: When we’re young, we are taught that when making new friends with other kids, we simply walking up to one and another and say “Hi want to be friends?” As children boys make lots of friends growing up, some of whom will end up sticking around long enough to become best friends later on as adults.

s an adult some men will make friends through other sources other than the childhood school yard, such as the work place, and meeting new friends through other friends. You could say that there ‘s an un-official guide to making friends when you look at it from a different stand point, however there is one question this un-heard of yet commonly used guide has yet to have answers for us. If a man is in his 30’s and have never had any real guy friends, how does he go about making real legitimate guy friends in today’s day and age? I was extremely stumped with trying to figure out the answer to this question after watching the film I Love You, Man. A romantic comedy about bromancing, for those who don’t know the term of bromancing, bromance is the term used when two straight men shear a none sexual love and affection for each other (Information found via Wikipedia.) Call me old fashion, but I personally don’t care to use any word that combines the word “Bro” and “Mance” together as one word, perhaps it’s my inability to evolve into a more modern age man, but I prefer to use the term “Friendship” when referring to a friend. Anyway despite what I just said, the meaning of bromancing works extremely well for the film as it does present some of the most awkward of scenes between the main characters that sprout into some very hilarious moments that had me surprisingly laughing aloud. What really makes the concept so hilarious is the fact that: in all honesty this is a subject many guys probably will never encounter in their lifetime, and before going further, let me point out that there is a big difference between making a friend and making a best friend, and that one shouldn’t be confused with the other.

g married to the woman he loves and is happy having her as the closest thing he has to a friend, only to suddenly feel the need to makes a best guy friend before after over hearing his wife’s girlfriends talking about how awkward and utterly humiliated the wedding will be if he doesn’t have a best man, the message the film gives is it’s not as simple for grown men to makes friends as easily as one would like, because as evolved as man have become, we are very much still in that stone age sense of not being able to move past our common fears and experiencing the awkward feeling of rejection and making a fool of one’s self in front of their fellow man. The film is a very comedic and yet sometimes honest take on the horrid subject that is incredibly hilarious and touching, and will have moviegoers feeling good afterwards. The only problems I had was a few problems. The first being the fact that the film’s main plot is surrounded by awkward style humor which believe me I have no problem with at all because it does work nicely, however it does take its toll at times and some of the scenes can get a little over done to that point where you just feel bad for the characters rather than laughing your butt off at the scene. The film’s pacing does move a little slow at first which does drag on a little bit which unless you believe that patience is a virtue you might have some problems waiting before the main plot picks up, however it does make up for itself when the potty mouthed humor begins with the main plot. The only other problem I had was regarding the choices made on a couple of cast members in the film, which I’ll get into in just a bit don’t you worry, but know beforehand that this negative part is easily forgiven by me after the fact awesome legendry rock back RUSH is not only mentioned and their music played throughout the film’s course, but they themselves make a nice cameo performance in it.

ting: the acting is pretty solid, with the exception of a few bad apples. Paul Rudd is a fairly decent actor with an adequate résumé of past films, however I do find it sad to see that as an actor he is stuck in a cul-de-sac or a safety-net if you will of ‘safe films’, it seems that he only does comedies in today’s day and age which is a bit disappointing because I remember it wasn’t too long ago when he was a young and up and coming actor that was starring or co-starring in film of different genres, but now only seems to stick to the funny films and nothing more. However he does in fact do pretty well for himself in this film with his awkward sense of humor which works nicely, though I will recommend he at least try to explore a much broader horizon in the future or otherwise he may end up becoming a one trick pony. Rashida Jones gave a very enjoyable and entertaining performance, her ability to give a pleasing performance comes from the fact she is a lovely blend of sexy and humorous, she can make you laugh and look naturally attractive on screen without having to wear a pound and a half of makeup just to look half as good, which is a pleasantly rare commodity to have. Funny man Jason Segel from T.V’s "How I Met Your Mother" and from last year’s box office hit “Forgetting Sarah Marshall” gave a rather un-entertaining performance in the film, and it’s partly due to his inability to show more aggression in character, it’s nothing personal, I have nothing against the guy, he did after all do incredibly well in FSM with his style of comedy, but sadly his acting came off rather lazy in this time around with a performance that is so laid back that you hard notice any effort what-so-ever from his part. The rest of the cast did fairly well, from well known names like: Jon Favreau, Jane Curtin, J.K. Simmons, and Jaime Pressly just to name a few, all did fantastic jobs in their roles, the only one I didn’t quite a agree with was actor Andy Samberg, don’t get me wrong, the man is a hilarious comedian, but an actor he is not! Trust me when I say: I got as much enjoyment out of his performance in this film as I did with his 2007 lackluster film “Hot Rod”.

Final Say: I Love You, Man is a cleverly witty and let loose fun comedy that will have you laughing you butt off, and despite its flows it makes up greatly for itself as a great laid back and let loose film that fits perfectly as a date night film for couples looking to spend the night indoors on the couch, and a damn good time for your average moviegoer. I highly recommend it!
Copyright 2009 TCWreviews.com
All Rights Reserved
Posted by Clifford Kiyabu at 6:48 AM