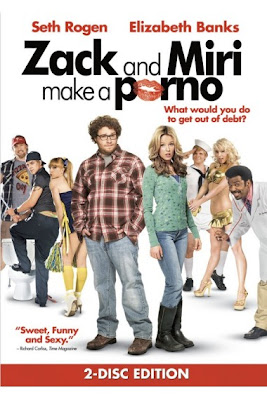 The Story is about: Lifelong platonic friends Zack and Miri look to solve their respective cash-flow problems by making an adult film together. As the cameras roll, however, the duo begins to sense that they may have more feelings for each other than they previously thought.

owever that is until renown Writer-Director Kevin Smith came along with his controversially hilarious film. Zack and Miri Make a Porno. A comedy that isn’t afraid to tell it like it is when it comes to the ever so taboo topic! And the raunchy comedy is much more vulgar and cruder than any film I have seen in its genre in years, than again calling it raunchy actually makes it sound weaker than it actually is, a notch below soft-core porn would actually be more appropriate for a film like this [Laughs]. But don’t think this film is all about sex and nothing else, no sir; it does in fact have a magnificently written plot that has a great deal of heart and soul poured into, which believe me is a rare commodity to get out of viewing modern raunchy comedies such as this. Most filmmakers tend to void a good plot and fine quality writing just so they can expose more flesh than is actually needed on screen, but what Smith’s film Zack and Miri does that’s different than other films is offer up smart intellectual quality writing at its best, while at the same time maintaining a no holds bare sense of humor filled with obscenity. The pacing of the film goes quite nicely, although I do wish the film was a little longer than an hour and forty minutes, I mean I just felt the film could have gone on longer than it did because the end result leaves you wanting much more, but after knowing that the film was threatened with an NC-17 rating by the MPAA unless director Kevin Smith skimmed down some of the more explicit scenes in the film (Which comes natural with this type of genre) it was understandable why it felt a little cut short. However that was until I found out that it was skimmed down not once but twice because of the rating system, and only after Smith had it appealed was it finally given the hard R-rating it should have gotten in the first place.

But still, as much as it was cut down, it still remained as dirty and offbeat as his oth

er memorable films, which believe me, is a pleasure indeed. This could easily be called Smith’s return to hard core comedy; it seemed that after his less crude more family friendly film Jersey Girl was realest, many loyal to his work had questioned his talent as a director and contemplated on rather or not he had gone soft on his audience after all these years of directing, I myself enjoyed the film but knew exactly what his fan base meant, smith is known for making films that are generally for an adult targeted audience, and even after he had made the long awaited sequel to his cult classic film Clerks, some had complained that the magic behind the first film was missing in the sequel Clerks II. However he returns to his roots of movie making with Zack and Miri, and much like his previous works back in the day, this too continues the tradition of offbeat, out of control and against the well comedy while presenting an important and strong message within the film. The thing that makes Zack and Miri such a great film is actually each of the individual characters Smith has, you can’t help but feel like you’re alongside them in the thick of it all, which could easily be understood, after all this film is partly based off the real life experience director Kevin Smith had while making his independent film (Clerks). Smith delivers a strong and stern message to his audience through his characters about hanging in there when life deals you a bad hand and how to deal with the S*** that life throws at you but does so in a manner that will have many crying with tears of laughter. Overall, Zack and Miri was a film that made me laugh and cry, and stayed with me days after I had seen it. It’s defiantly a film worth owning than alone seeing.

As for the a

cting: this film is filled with a fantastically funny and talented cast that is built of both mainstream and adult entertainment. Funny man Seth Rogen does an incredible job performing alongside the beautiful and talented Elizabeth Banks, both of which has gained mega stratum status over the last few years, it wasn’t long ago these two where at ”supportive” actor status and never getting the lead roles, but now days these two are becoming quite commodity in demand. Well they do extremely well in this, their onscreen chemistry works on such a lovely level, that you almost want these two to really end up with each other in real life. Craig Robinson who is hilarious from the hit show "The Office" offers up that offbeat sense of humor of his in this that works so nicely it’s hard not to laugh whenever he’s on screen. Jason Mewes, who has long been Kevin Smith’s partner in crime may have returned on the big screen without his buddy backing him up as his onscreen partner, shows that he can carry pull his own weight all by himself in the role “Lester” a character I truly believe no other actor on the planet could have played better than him [Laughs.] both Katie Morgan and Traci Lords does a magnificent job in this. If you don’t know who either of them is than obviously you’re ether not old enough to be watching a film like this or too much of a prude to understand the shear brilliance of having Traci Lords, one of the all time biggest and controversial adult film stars of the 1980’s work side by side with Katie Morgan, who is easily the most well known adult film stars in the business today, the idea of having the best of two eras working alongside each other is simply brilliant, and works incredibly well. Ricky Mabe does okay, but honestly I wasn’t too keen about his performance in the film. Lastly, the film has a nice set of cameos by many well known faces in Hollywood, two of which that stood out well in the film was none other than Brandon Routh and Justin Long, who play two gay porn stars, and believe me when I say their scenes may be sort and few in the film, but trust when I say they do not fail to make you laugh until you cry.

Copyright 2009 TCWreviews.com
All Rights Reserved
Posted by Clifford Kiyabu at 4:12 AM