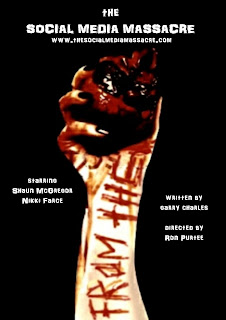 If there’s one thing that’s truly nightmarish for someone in my field, it’s having your computer go on the fritz causing you to lose data that wasn’t backed up. As I sit here re-writing this very article, I’m left with the regret of not backing it up once it was done, oh how painfully agonizing the feeling is to put work into something only to lose it in a flash of a blue screen fail. Oh well, it’s done and gone and I’ve already gone through the process to re-written it all back up again.
But enough about that. For all you indie horror fans eagerly awaiting the next installment of indie filmmaker Ron Purtee’s next installment of The Social Media Massacre, well wait no further because the latest episode which is titled “FROM THE HEART” is here! With the latest episode Purtee has teamed up with award winning UK horror writer Garry Charles to bring forth a dark tale of love, obsession and bodily mutilation all wrapped up in a neat little package. Purtee's idea is to create short based within the confines of our online social world, a series of webisodes that are confined by the limitations of the single camera set up.
So far we have been treated to murder, suicide and envy fuelled revenge, a steady build up of creeping terror preparing us for this journey into the mind of twisted lovers, brought to life on the screen by talented newcomers Shaun McGregor and Nikki Farce. Anyone familiar with Charles' writing will know he has no qualms with crossing the lines of good taste and he does so here with what seems to be a knowing smile on his face, penning a script that manages to rub taste's nose in the dark stench of Taboo's darkest areas.

The latest installment is ever more disturbing then the last one and as morbid as they come, but for those who’ve seen the previous installments this is to be expected of indie filmmaker Ron Purtee and his directing style. I can guarantee you one thing, this series is not for everyone, especially those squeamish to blood or other bodily dismemberment, so know that you’ve been warned.

WARNING MAY NOT BE SUITABLE FOR THE FAINT OF HEART


Side Note: So far this series has manage to not cease to disturb me on how gruesomely shocking it can get at times.
Posted by Clifford Kiyabu at 9:05 PM