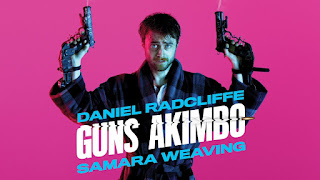 Review: It’s almost like a rite of passage for any child actor to take on a role that is out of the boundaries of what they’re expected. And yeah, for actor Daniel Radcliffe there have been a fair amount of films to cross those boundaries since his Harry Potter days. Films like The Woman in Black (2012), Horns (2013), Swiss Army Man (2016) just to name a few, are all evident of that chapter of sweet innocence coming to a closed in his career. That being said however, none of those films really struck a cored with me. They aren’t trash by any means. But I don’t consider them really “shock” value. That is until I watched Guns Akimbo. Now before I dive into the real meat of this review let me address the elephant in the room. [waves at Bill the wallflower elephant] No but seriously, this film is surrounded by a plethora of controversy. Mostly centered around the film’s director, Jason Lei Howden just prior to the movie’s theatrical release. I won’t go into the details regarding the disturbing controversy because this review isn’t about that, or him for that matter. If you want to know more about that then I suggest you look it up for yourself, which believe me isn’t hard at all to find. and it is quite the doozy of a read. But I digress..

Guns Akimbo is a nut cracking, ultra violent rollercoaster ride that, once the wheels start rolling you’re on a one way psychedelic trip to crazy town, and you forgot to put on some pants, baby! The plot revolves around Miles (Radcliffe) a soft spoken video game developer who divides his free time between secretly obsessing over his ex-girlfriend like a creeper through social media, and being a typical keyboard warrior picking fights with online trolls. That is until he picks a fight with the wrong motherfucker and finds himself in a heap of shit when a notorious organization known as Skizm shows up to bolt two pistols to his hands. Skizm is an entertainment terror group who force’s individuals of different backgrounds (ranging drug dealers, psychos, criminally insane, and your Garden variety bully) to fight each other to the death while millions of viewers watch via the internet and cheer on their favorites. Soon Miles finds himself being hunted by Skizm’s MVP, Nix (Weaving) a murder happy, coke snorting psycho who will stop at nothing to get her target. If there’s one person you don’t want to fuck with, it’s definitely Nix. Guns Akimbo in many ways remind me of Birds of Prey, in that it is a balls to the wall wild, but also super stylish film. Especially with it’s color pallet. It’s almost as if Scott Pilgrim Vs The World, and Shoot ‘Em Up had a coke fueled one night stand, and nine months later Guns Akimbo was the unintended result of not using protection. Yes, it’s that wild in my opinion!

The action sequences are very well choreographed, one scene in particular feels like it could have been ripped right from a John Wick movie. The violence is unforgiving and unrelenting, and is without a doubt pleasing is so many ways because it’s so fucking ridiculous that I could not help but love it! The intense violence is then complimented with a dark sense of humor. This is where Radcliffe truly shines in the film. His ability to hit the mark with comedic timing is so on point and awkwardly funny, that it’s hard not to laugh at the predicament and relate at the same time. But while Radcliffe might be the film’s headliner, the true star of Guns Akimbo that pretty much steals the whole fucking picture is without a doubt Samara Weaving. Her performance as Nix is so off the wall nuts, that at times she reminds me of a little of Margot Robbie’s Harley Quinn (minus the colorful outfits and overly done Brooklyn accent, of course). Hands down she is the absolute best part of Guns Akimbo. Not a single scene involving her comes off as dull, or boring in the slightest. Hell, I’d go as far as to say that I’d be willing to pay good money to see a Nix movie starring Samara Weaving! Ned Dennehy does exceptionally well as the film’s main antagonist, Riktor. A villain with an egotistical personality and power complex that is larger than life itself. But to be frank, the character isn’t really fleshed out all too much with backstory or substance to go on. Which unfortunately is a recurring theme for most of the characters in the film. There are so many potential plot points and opportunities for substance that go ignored. Or in some cases, begin, starts to go somewhere interesting, and then flatlines. Never to be brought up again, or have any sort of meaningful conclusion. It’s kinda like the equivalent to taking a massive peanut butter shit and then realizing after the fact that there isn’t any toilet paper in the fucking bathroom. So now you need to wobble your ridiculous ass off the crapper to get a fresh roll hoping above all hope, that no one catches you in such a compromising situation. Yeah, it’s that unsatisfying. Another issue I had was the unrealistic responses from normal every day people while all these fire fights are occurring around town throughout the story’s progression. In one scene two characters unload over a hundred rounds in an apartment with an open window. Yet people are going about their business walking on the sidewalk just outside. One of the characters then encounter a couple of police officers just around the corner. And you’re telling me they didn’t hear all the gunshots fired!? This is only but a single example of multiple occurrences throughout the film in which the loud as fuck gunplay goes completely ignored by passerby’s. Maybe it’s nitpicking. But its a pretty bad oversight that should have been noticed and corrected by the filmmaker.

Now that’s not to say the unfinished plot points, or unrealistic responses fire fights are a deal breaker. Despite the the films multiple issues, or the drug fueled insanity of gunplay that never really stops once the peddle is punched down. There is a much more to Guns Akimbo than meats the eye. Beneath the surface, the movie is a commentary on society at large, and the direction we are in many ways heading. From cyber bullying, toxic mob mentality, to people simply lacking empathy for their fellow man, especially on social media. That’s the ultimate message director Jason Lei Howden was trying to get across with Guns Akimbo. While I do think that message could have been put forward a little better, and the film in general done better. The movie is far from being shit. It can be a bit try hard at times, yes this is true. But it’s nowhere near the level of human waist that Hollywood has shot out from it’s poop shoot over the years.

Final Verdict: All in all. Guns Akimbo is a fun rollercoaster ride of violence and mayhem from start to finish with a corky sense of humor. Is it perfect? Far from it. The pros slightly outweigh the cons. But while it does have it’s problematic issues, the movie is still a pretty cool way to kill a couple of hours. And it doesn’t hurt that it’s got a pretty killer 80’s soundtrack to further compliment it’s over the top action sequences!