Starring: Aaron Eckhart, Elizabeth Banks, Jessica Alba, Logan Lerman, Timothy Olyphant
Directed By: Bernie Goldmann, Melisa Wallack
Written By: Melisa Wallack
Released: 2008
Grade: B
Meet Bill gives us the story of a man fairly well off at life; nice house, beautiful wife, and yet is completely miserable. This is a story we have heard countless times before and the trailer makes it look decent, but overall pretty average. The trailer really doesn’t do the movie any justice though. Meet Bill had me pleasantly surprised. Sure it takes a plot that has been done before and doesn’t necessarily accomplish that much with it, but is still smart and enjoyable along the way.
Meet Bill: he works in a dead end job at a bank working for his father-in-law and the rest of his wife’s family. His job is of no importance and his title was pretty much just created for him to have a paycheck to support his wife, Jess (Banks). He deals with it day after day though for her. Soon Bill gains suspicions that it might all be for nothing. Jess is giving him reason to believe that she is having an affair with a local, arrogant, self-indulgent news caster, Chip (Olyphant). The worst part is that she isn’t distant, but friendly towards him as if everything is perfect when that is far from the truth of the situation. Bill plants a camera in their house pointed at his bed. When he watches the video, his doubts in Jess are confirmed. The video captured Jess and Chip having sex on the same bed that Jess and him sleep on every night. Not to mention, during sex, Jess is constantly putting Bill down and describing all of the ways how he is the lesser man compared to Chip. For awhile, Jess won’t even admit that this is true and actually tries to make Bill out to be the bad guy for not giving her enough privacy and trust even though she has abandoned that trust.
Seeing the video himself and it not even doing much for him is bad enough, but than it managed to get leaked on to the internet and sent to every person that Bill works with on a daily basis. Since Bill is only human, he naturally has to put up a fight. By attacking Chip, this only ends up making him look bad. These attacks are all caught on camera and pin him as the “deranged fan”, as if he is some sort of an obsessed fan of Chips, not even acknowledging how he has been wronged. This is where it is most clear that Bill’s life is falling apart. His marriage is dwindling and most likely is over at this point. He is forced to continue going to work and even to have dinner with Jess’s family who have all seen the proof that she is no longer loyal to Bill. Bill is desperately trying to find a way out of his job as he feels more imprisoned now than ever. He decides a good way out would be too open a store that is part of a national donut chain. He has to be approved to do this, which ends up being a longer process than he would have liked. Plus they want to meet his wife, which is not really an option right now. Meanwhile, Bill has been assigned to be a mentor to a 15 year-old student at a private school known as “The Kid”. The Kid really helps Bill with everything he is going through and does everything he can to make sure his future is more enjoyable than his present is. He even pays off an older crush of his, Lucy (Alba), who works as a lingerie salesperson, to make Bill look more impressive and to pretend to be his wife in order to get his donut shop and have a chance at a new start.
Aaron Eckhart does wonderfully as Bill and a big part of the reason why the film worked as wel 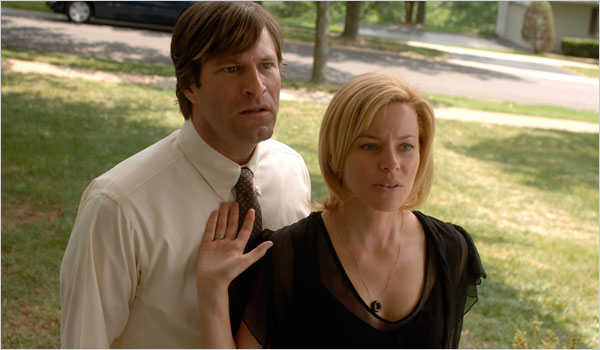 l as it did is because of him. Bill could have easily been a sad, pathetic character. Sure it would get sympathy, but that wouldn’t mean that we liked him or could really care for him or what happened to him in the future. Eckhart added a certain intelligence to him. He showed his struggle very well and had a very subtle way to how he carried and brought the character to life. Eckhart utilizes some of the sarcasm in the film, showing us some background and substance. With this style that he brings to Bill works off of a great struggle trapped inside a very unknown and unmotivated life. Elizabeth Banks did well as Jess, the disloyal wife. She wasn’t a flat out un-relatable character though. She contributed to Bill’s unhappiness and we looked down on her for that somewhat, but there was still a level of humanity that we saw in her. She was used and wronged to an extent too and ultimately she showed that she did genuinely care for Bill.

Jessica Alba did have noticeably bad acting in areas, but her part in the film was very limited. Her films that are good are the ones where she has a smaller part in them. The ones that end up being terrible are the ones that has a big part in. She is not good at conveying depth, her strengths are in being able to sell a film and to just look pretty. That is why her role in this film works. She is playing the hot girl and that is pretty much it. Since this isn’t asking a lot from her, we are able to accept this and can enjoy the finer actors in the film who luckily are the ones with the bigger roles. Logan Lerman played The Kid very well. He offers great youth, liveliness, and boldness that makes him stand out. He brings hope and life back in to our story and works wonderfully alongside Aaron Eckhart. Lerman is bursting with energy and potential and he deserves to be able to challenge himself further. Timothy Olyphant really brought forward the typical news caster. He was more in love with himself, and of course the hair, than anything else. Just the way he obsessed over his reputation was hilarious.
The low point of Meet Bill is that it takes a story that has been done before and not only doesn’t go anywhere new with it, but doesn’t even come to any real conclusion. Luckily, the rest of the film is impressive enough that we are able to accept this and let it go, remembering the many high points the film has to offer. The dialogue is very reach and highlights a certain sarcastic flair that works perfectly with Eckhart’s strengths. This really helps us see things from his point of view and to not be subjected to being someone we feel sorry for, but someone that has a spark in them that is only very subtly let out. Some of the jokes from the public viewing Bill as the “deranged fan” are pretty priceless too. In a fight Bill gets in with Chip, he demands that he apologizes for mistreating his wife. ‘Apologize’ becomes a punch line in itself to the entire community. There is one particular user of this word that seems to always be around Bill making it random and entertaining whenever we see him. There is a scene where Bill and The Kid get high and shop, terrorizing the stores, but having a ton of fun doing it, utilizing the goofiness within themselves, which is pretty refreshing considering Bill’s general negative take on his life at the time. While Meet Bill could have gone farther and done more with the story, it still takes a great cast and conveys sarcastic very subtle comedy that ends up working very well to give us a thoroughly enjoyable film.
Posted by Kelsey Zukowski at 11:32 PM