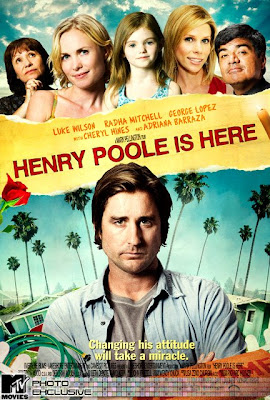 
There is always one film that everyone will disagree with me on. It has always happened. I will side away from critics and call some movies that they call great terrible. Two years ago I was the only one who called “The Descent” overrated. Last year, I was the only one that hated “Eastern Promises.” I was looking for the film that I hated but everyone else likes so far this year. I found my answer two nights ago when I watched the latest Luke Wilson drama “Henry Poole Is Here.”

And oh, it’s bad. Oh sweet Jesus Christ, is it terrible. There is not a single redeeming quality about this film. Everything about this movie is so laughably bad – from the actors to the script, from the direction to the overall story. Out of all of the bad movies that I’ve seen this year, which include “The Hottie and the Nottie,” “Witless Protection,” “10,000 B.C.,” ‘Over Her Dead Body,” and even “Meet the Spartans,” this movie is the worst of the year so far, and it will probably stay as the worst.

Luke Wilson plays Henry Poole, a thirty-something year old guy who leaves his fiancée and family to live in a house all by himself for the rest of his life. According to doctors, he has a problem, and he is very sick and is going to die soon. This neighbor of his (Adriana Barraza) comes knocking on his door, and stares at the side of his house. A stain on the wall, which looks like a mix of menstrual blood and tomato soup, is proclaimed the second coming of Christ, and Henry Poole’s house is now bigger than the fucking church.

Now tell me what is wrong about this premise? Almost everything. First off, Henry Poole is one of the worst characters to ever be brought on the silver screen. He looks at everyone and sees nothing worth liking. It’s not that I have a problem with that part, because in all fairness, so do I, but the problem with the character is that he is so cynical that he never really quite fits into the movie. He hates everything and is so convinced that God doesn’t exist because he is sick.

But then comes the clichéd romantic storyline, how the cynical and very tight guy falls in love with nice and cute girl next door, this time played by Radha Mitchell and not Kristen Dunst. Her daughter (Morgan Lily) hasn’t talked for over a year until she goes and stares at the wall. Everyone believes that if this isn’t a miracle, they don’t know what is. You know what would be the better end of the miracle? If our main character died in the first five minutes of the movie.

I don’t hate this film for any beliefs of religion. Though I do not believe in God, it doesn’t make me hate the movie any more or any less than I do. I hate the movie because it believes that everything happens for a reason. The script goes out of its way to preach to us that our lives have already been written, but we have yet to find the reason for our existence. For everyone in this film, their reason for existence is a fucking wall with blood on it. This wall attracts everyone, including old ladies and George Lopez.

But the most normal person in the entire movie is the one that is the most unlikely – Henry Poole. He is looking at the wall like, “What the fuck are these old bitches talking about?” Everyone else here feels like that they walked out of some church bus. You can believe whatever you want to believe, and I don’t have a problem with you believing in anything, but there is a difference between believing in a religion or something that is just plain ridiculous. Do you know what I call that?

As the movie goes on, we eventually see Poole become the better man that he should be. He’s being nice to people and he’s starting to eat healthy. He grew a pair of gonads and asked Radha out on a date. But just when you think that he was changing for the better, out comes a fucking twist in vein of “The Sixth Sense” that should have been left on the cutting-room floor, for Luke Wilson goes apeshit and starts chopping down his house with an axe like he’s motherfucking Paul Bunyan. This is when the house falls on top of him, and we’re supposed to feel sorry for the guy after he destroyed all of the bible-humpers Christian equipment.

Umm… no fuckhead. It’s actually the opposite.

I don’t understand what these filmmakers were trying to accomplish with this film. If you don’t believe in God, does that mean that a house is going to fall on you? If you look at the world like all it does is shit in your face, can it really shit in your face one day? The question that is begged throughout the movie though is what kind of a sin did you do that your punishment is to watch this crappy movie?

And I’m sure that in the comments section someone is going to say, “You only hated this film because it was religious and you’re just a mean fuck.” First off, you don’t have to remind me that I’m not religious and I’m a mean fuck. I can figure that out for myself, thank you very much.

And secondly, and most importantly, I don’t judge movies whether or not they are religious. To me, religion is just somewhere you can go where you can get away from the world’s troubles. That is why I go to the movie theater. If you like to go to church and attend mass on Sundays, all the more power to you. But just because a movie is religious doesn’t mean I don’t enjoy religious movies. I judge movies on how artistic they are. It just seems like this time around that they misspelled the word “artistic” with “autistic.”

Let the backlash begin.
Posted by TonyD at 6:33 PM